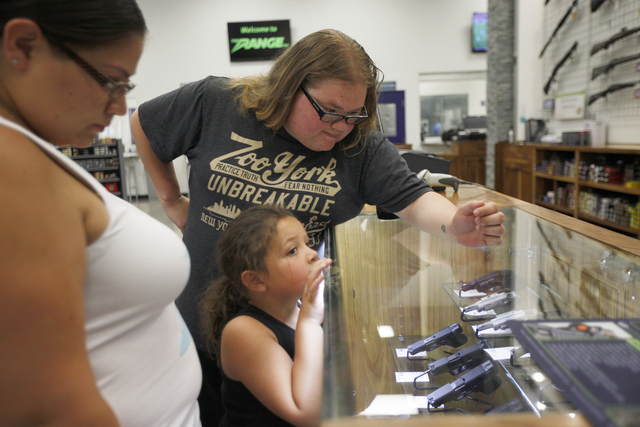 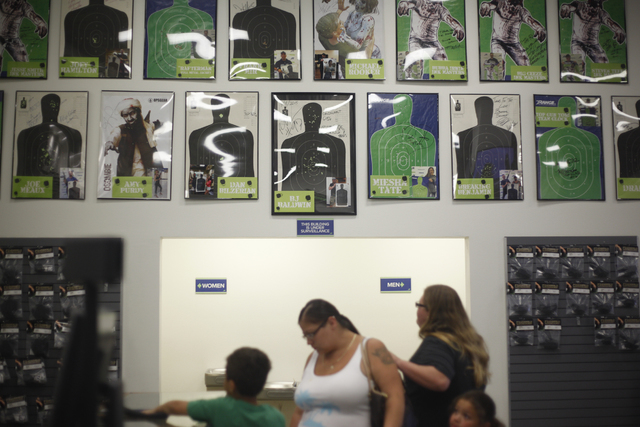 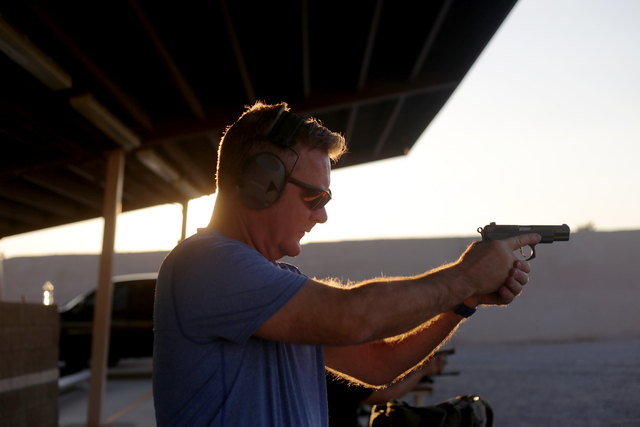 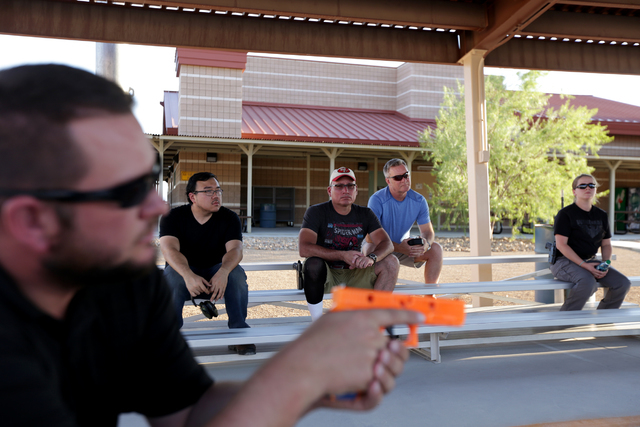 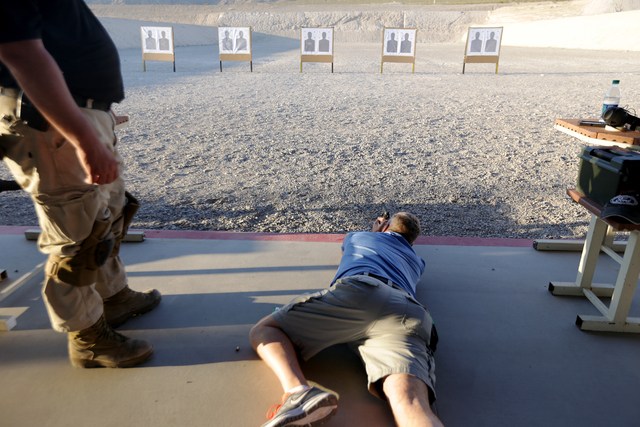 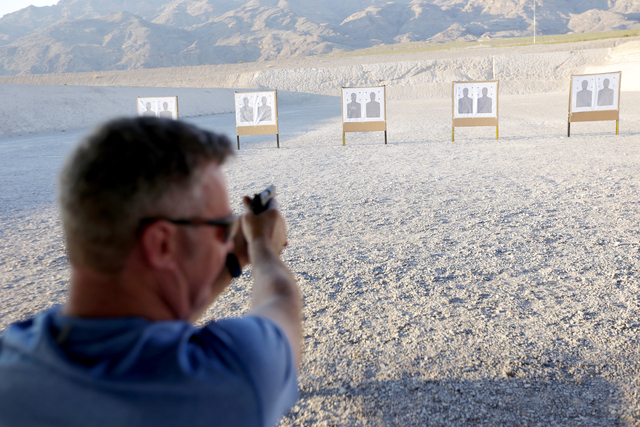 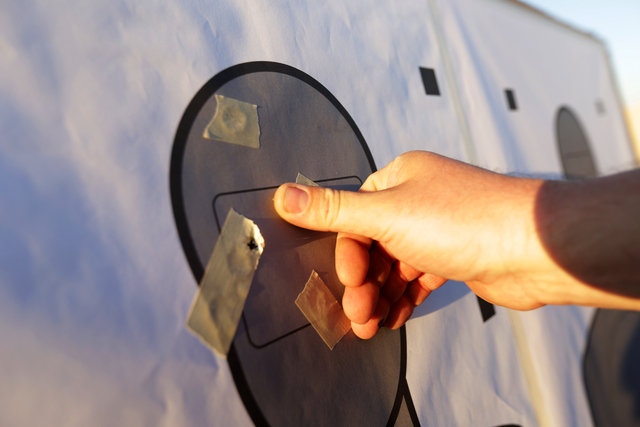 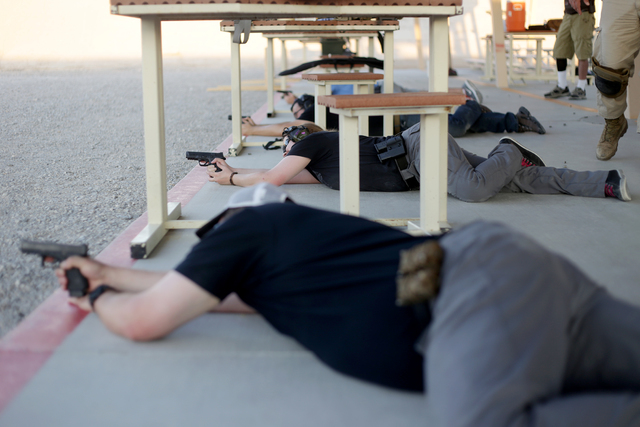 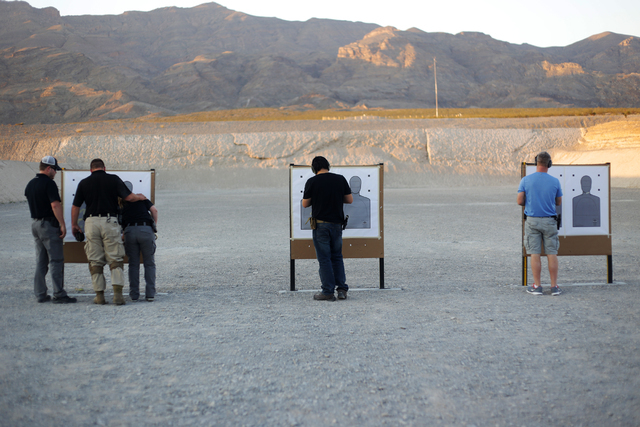 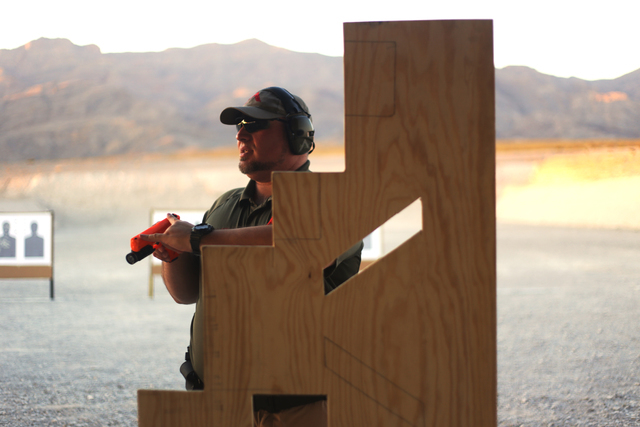 Eric Loden, an Adapt instructor, instructs a class on how to shoot with a barricade wall on Friday, June 24, 2016 at the Clark County Shooting Complex in Las Vegas. Rachel Aston/Las Vegas Review-Journal Follow @rookie__rae 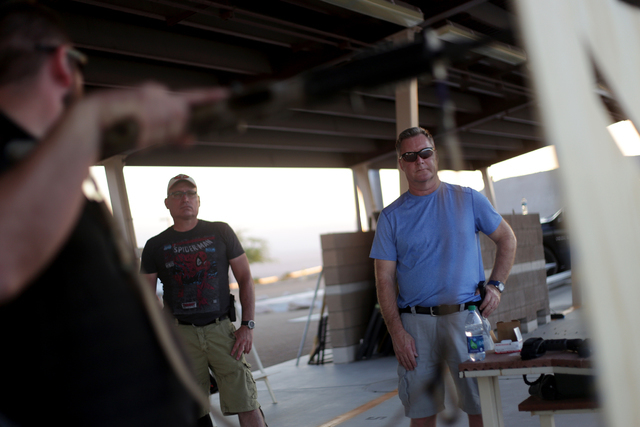 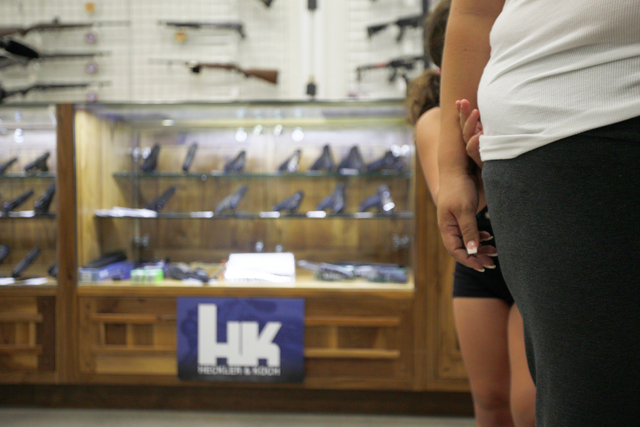 Carolina Ramirez holds on to her mom Naomi Ramirez-Lang as they looks at a gun to purchase at The Range 702 store in Las Vegas on Monday, June 20, 2016. Rachel Aston/Las Vegas Review-Journal Follow @rookie__rae 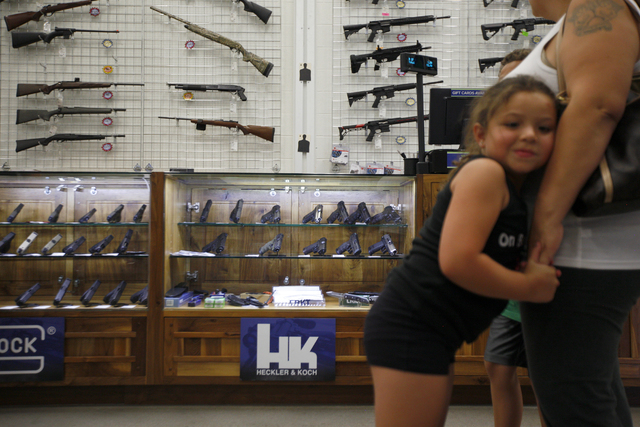 Carolina Ramirez holds on to her mom Naomi as they looks at a gun to purchase at The Range 702 store in Las Vegas on Monday, June 20, 2016. Rachel Aston/Las Vegas Review-Journal Follow @rookie__rae 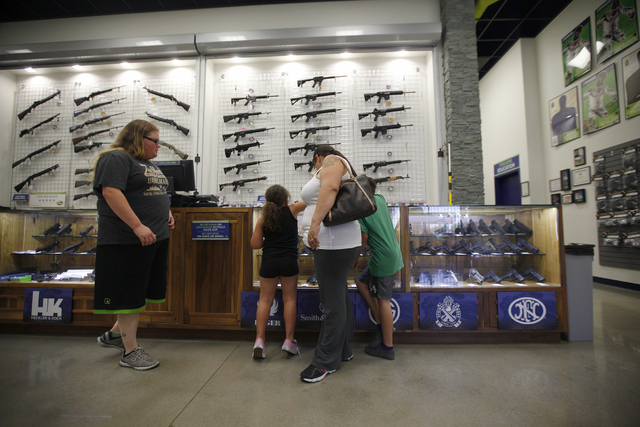 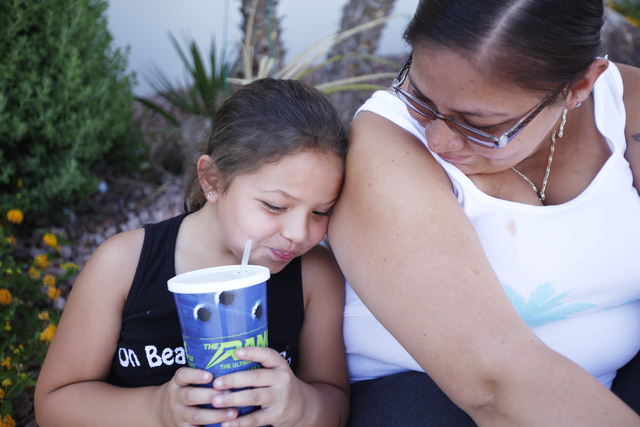 Gays with guns don’t get bashed.

That was part of Kimberly Lang’s thought process when she bought her first gun last week.

Lang, 26, and her wife, Naomi Ramirez-Lang, 27, had been talking about firearm ownership for some time, but the Mesquite residents always hesitated. They have two children and anything-can-happen concerns with having a gun in their home.

“I’ve always wanted a gun, and nobody in my family’s really let me have one,” Lang said. “I really want to own one for the safety of my family.”

But then on June 12 a lone gunman entered a gay nightclub in Orlando, Florida. Authorities have said Omar Mateen shot more than 100 people — 49 fatally — during Latin night at Orlando’s Pulse nightclub before he was killed by police.

The tragedy holds the distinction of being the deadliest multiple-victim shooting in recent U.S. history, and it forced the women to reconsider.

Being LGBT means you don’t always have support from everyone else, she said. “You can’t rely on anybody else to protect you.”

The women enjoy their small-town life in Mesquite. But the town is deeply religious, and they sometimes feel like outsiders.

“Because I’m gay, sometimes people who have really strong religious beliefs want to get in my face and tell me I’m going to hell … I’ve had people from afar yell at me and call me gay and that I’m an abomination,” Lang said. “They’re very against gays. They’re very against anything that’s outside their religion.”

Lang said she generally feels safe in Mesquite, but she still worries.

“In Mesquite I don’t feel as protected as a gay person compared to the straight people,” she said. “I feel like I have to take care of my family, even though my extended family is very protective. I feel like I need to protect my own.”

Ramirez said the gay community has come a long way in gaining acceptance and equal rights, but there has been a conservative backlash.

“Being gay you do feel that backlash because not everybody’s open-minded,” she said. “I believe that the only people who can protect you are yourself and your family, and sometimes, unfortunately, not even them if they don’t accept you.”

A week ago, the women put their children, 8-year-old Dominic and 5-year-old Carolina, in the car and drove to Las Vegas to buy a gun.

And they’re not alone. Many people in lesbian, gay, bisexual and transgender communities — their sense of security shaken by the Orlando tragedy — have sought out firearms for self-defense. Out for Liberty, an LGBT Libertarian group, offered gay bar employees free concealed weapons classes.

And the Las Vegas chapter of the Pink Pistols, an LGBT gun club, has seen a significant spike in its membership. In the week after the Orlando shooting, its Facebook ranks grew by 300 percent.

For Lang, the Pink Pistols is anopportunity to get guidance about firearms from other LGBT people. That’s why she made the drive to Vegas. Mainstream gun culture can be militaristic and macho, she said.

“I think more of your macho men would be more condescending to us and not understanding,” she said. “I feel it (Pink Pistols) is a safe place to go.

“I just want to make sure I get one I feel comfortable with,” she said about her first gun.

That’s where Lynn Norman, president of the Las Vegas chapter of the Pink Pistols, came in. He responded to Lang’s post on the group’s Facebook page, and met Lang and her family at a local gun range to help her try out a few models.

“It can be intimidating” for first-time shooters, Norman said. “It was for me in the beginning, too.”

Norman said the Pink Pistols started on the East Coast more than a decade ago, and he restarted the Las Vegas chapter about a year ago. Although it’s an LGBT group, the Pink Pistols hasn’t been involved with the fight for marriage equality or other issues faced by the gay community — its sole mission is to help LGBT people get armed and trained.

It’s mostly a social club. The group holds impromptu get-togethers on weekends at the Clark County Shooting Complex. It often partners with Adapt Academy for training and concealed weapons classes. Norman said the academy does more hands-on training than other instructors and knows how to work with the gay community. It often gives Pink Pistols members discounts on classes.

The group brings extra guns so newcomers can try out different models.

Since the Pulse nightclub shooting, the Facebook page went from about 40 members to more than 120. A lot of them are LGBT people who want to learn about firearms, but there are also firearms instructors and straight people who just want to help the group.

“It’s really amazing how many people came out of the woodwork,” Norman said. “We accept everyone.”

It’s important to emphasize how crucial it is to get training for firearms if planning to buy one, he said. If you ever find yourself in a position where you will need to use a gun to defend yourself, you’ll want that experience.

On Friday night, Norman and a couple of friends took an advanced class with Adapt Academy. They practiced kneeling and prone shooting positions and shooting from behind obstacles. The instructors said that people don’t rise to the situation in a crisis but fall back on training.

“People get deer-in-the-headlights scared,” Norman said. “The sad thing about what happened in Orlando is it took the police three hours to get in there.”

Norman said he helped Lang try out a few models, and the women settled on a Beretta handgun, which they chose because they liked the grips and other features.