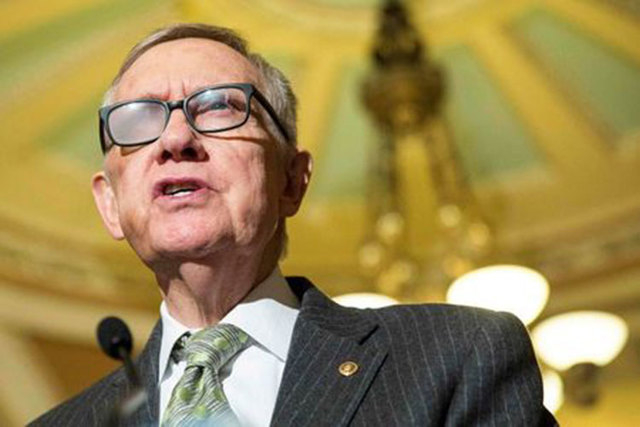 WASHINGTON — Sen. Harry Reid on Tuesday applauded the Las Vegas man who made up a story about him being beaten up by his brother and successfully planted the tale with some conservative bloggers and radio talk show hosts.

“What this guy proved to me is that journalism doesn’t exist,” Reid said. “I wish I’d meet this guy and pat him on the back.”

Larry Pfeifer has confessed to spinning the yarn about Reid, telling the Huffington Post in a piece published Tuesday he did it on a whim to test a blogger who was speculating Reid’s facial injuries from an exercise accident on New Year’s Day could have instead been the result of an attack by Mafia hitmen.

Pfeifer, who used the pseudonym “Elliot Easton” in his contacts with various media, disclosed his identity in a Las Vegas Sun story published Sunday.

The episode has provided journalists with a cautionary tale on source-checking. It also has been seized by the left to rub egg in the face of the right that seemed eager to gin reaction to a wild story about Reid, a political nemesis.

Pfeifer, who said he was a former nightclub consultant, said he told the tale to John Hinderaker, a lawyer and contributor to conservative publications who wrote about it on his “Power Line” blog and put Pfeifer in touch with radio host Rush Limbaugh and other outlets. Some bit, others did not.

Hinderaker told The Huffington Post he tried to check the facts, and included caveats stating he couldn’t verify the report. But ultimately on April 3 he published Pfeifer’s story about being present at an Alcoholics Anonymous meeting in Henderson on New Year’s Eve when a bloodied and rumpled man named “Larry” arrived saying he had just been in a family fight. Reid’s brother’s name is Larry.

In reporting a seemingly fantastic story, Hinderaker argued that Reid had done essentially the same thing during the 2012 presidential campaign when he said Mitt Romney had not paid taxes for 10 years, attributing it to an unnamed source and reaping widespread coverage in the national media.

Reid recently acknowledged the Romney story was not true but said he would not apologize for it because he was trying to make a point about the Republican not releasing his tax returns.

Pfeifer has expressed regret at making up a story about Reid’s family that spread far and wide on the Internet. He called Reid’s office in Las Vegas on Tuesday saying he wanted to apologize, according to Reid aides.

But Reid said in an interview: “I don’t see why he should apologize. I’m glad at what he did. It shows how foolish journalism is as we know it. It’s evaporating and that’s too bad.”

“Look what he did to Rush Limbaugh,” Reid said. “This appeared in newspapers all over the country, in addition to the (story) where the gangsters beat me up.”

Reid said he does not consider Limbaugh and others who circulated the story to be journalists.

“If they were journalists they wouldn’t be playing around with this garbage,” he said.