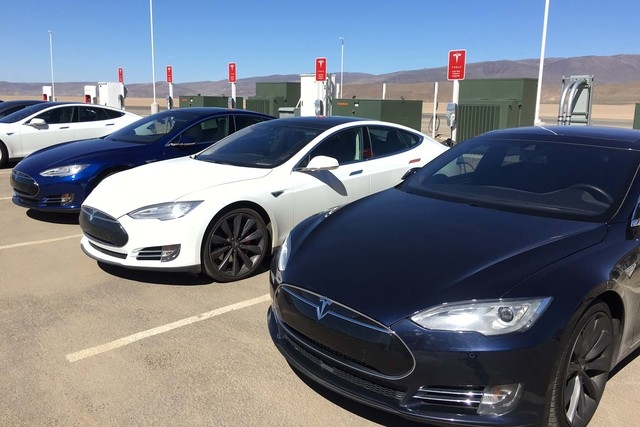 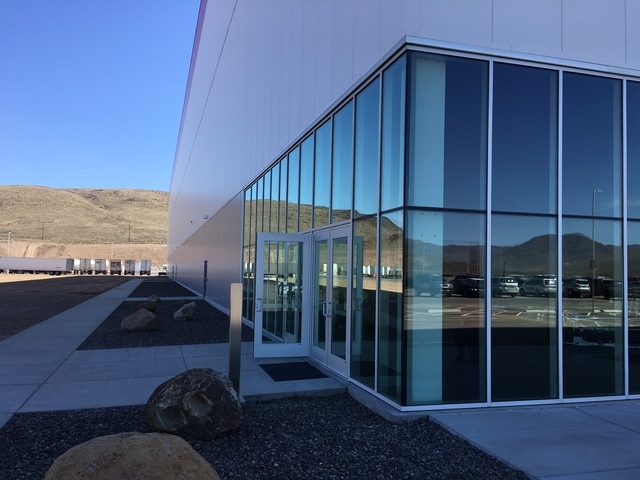 Tesla's Gigafactory east of Reno is already huge but only 14 percent of the final facility is built. Tesla gave a tour on Friday, March 18, 2016. (Sean Whaley/Las Vegas Review-Journal Capital Bureau) 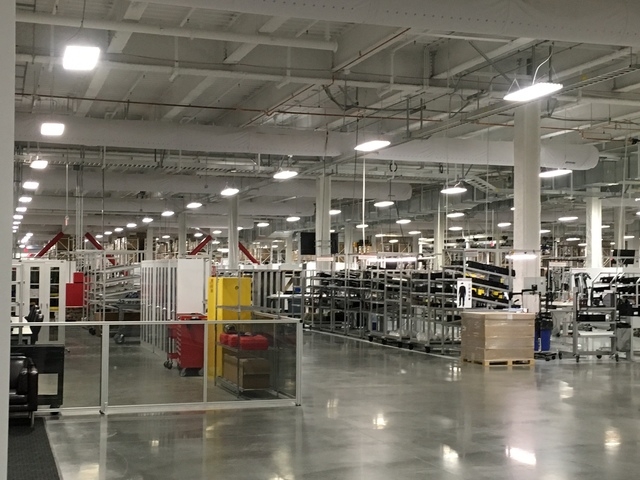 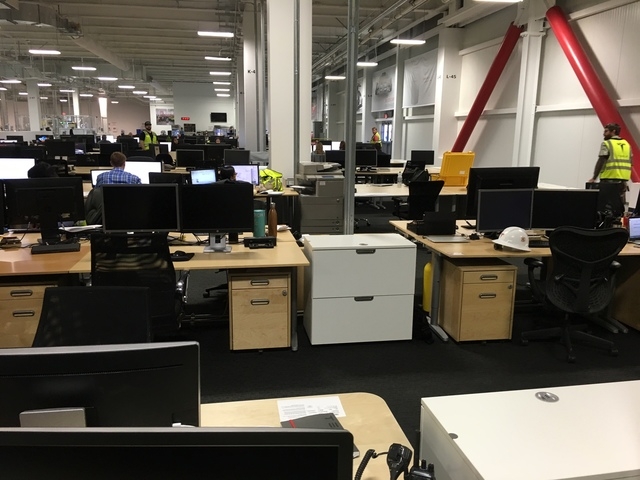 STOREY COUNTY — Tesla Motors officials pulled back the curtains Friday at its Gigafactory under construction east of Reno, offering some local media a chance to see the progress of what will become one of the largest factories in the world.

Tesla officials, who spoke freely but asked not to be quoted by name, wanted to show off the work underway to give the public some sense of what is going on at the massive structure just off Electric Avenue in the Tahoe-Reno Industrial Center.

Security is high at the facility, with a guard gate and cameras watching the entire site.

So far the footprint for the building is 800,000 square feet, with 1.9 million square feet of manufacturing space on as many as four floors. The factory will be expanded in modular units as demand grows for the lithium ion batteries that will be produced at the plant for its all-electric vehicles.

The current size is only about 14 percent of what is expected at full build-out as construction continues over the next several years.

With a planned production rate of 500,000 cars per year in the latter half of this decade, Tesla alone will require today’s entire worldwide production of lithium ion batteries. The Tesla Gigafactory was created to ensure an adequate supply of the batteries to support its projected demand.

The cost of a home unit Power Wall starts at $3,000, but the price is expected to come down as production ramps up.

It was a bit quiet Friday as the manufacturing portion of the facility was mostly shut down for the day. But workers and robotic arms still processed some of the battery storage products that went on sale in October.

Nearby, an open but temporary office area for other employees was active. Employees involved in the production process worked at open desks. A spokesman explained that at Tesla, there are no offices, not even for CEO Elon Musk, who was not present for the tour.

Tesla officials showed how the raw materials will come into the factory on the east side of the building, running through a production process that will result in a finished product for the company’s vehicles starting in early 2017.

Ten state lawmakers toured the plant Wednesday. The Legislature in September 2014 approved $1.3 billion in tax incentives to lure the factory to Nevada.

A spokesman said the site was selected for several reasons, including rail access that will move the batteries to Tesla’s car manufacturing facility in Fremont, California. But the opportunity to create a completely green factory using solar, as well as potentially wind and geothermal, was another selling point for the site.

There is no natural gas or other fossil fuel being used in the factory. An 80-megawatt electrical generating station powers the facility now. In the future, the vast roof of the plant will house rooftop solar.

The company’s goal is to reduce its carbon footprint, a spokesman said.

The spokesman said that SolarCity, a rooftop solar company founded by Musk’s cousins Lyndon and Peter Rive will have to compete for the solar construction work just like any other company.

Tesla broke ground on the Gigafactory in June 2014 outside Sparks. By 2020, it will reach full capacity and produce more lithium ion batteries annually than were produced worldwide in 2013.

The Gigafactory is expected to generate $100 billion for Nevada’s economy over the next two decades, creating 6,500 jobs and adding 4 percent to the state’s gross domestic product.

Musk said in 2014 that without the factory, “we cannot produce a mass-market car.”

But construction hasn’t progressed without some hiccups.

Some construction workers walked off the job in late February, claiming a contractor has been bringing in lower-paid workers from out of state. Todd Koch, president of the Building and Construction Trades Council of Northern Nevada, said the protest is against Brycon Corp., a Rio Rancho, New Mexico, company hired by Tesla.

An estimated 300 workers set up a picket line around dawn on Electric Avenue, a four-lane divided road that leads to the gated Tesla site.

Tesla characterized the discourse as a struggle between union and nonunion contractors.