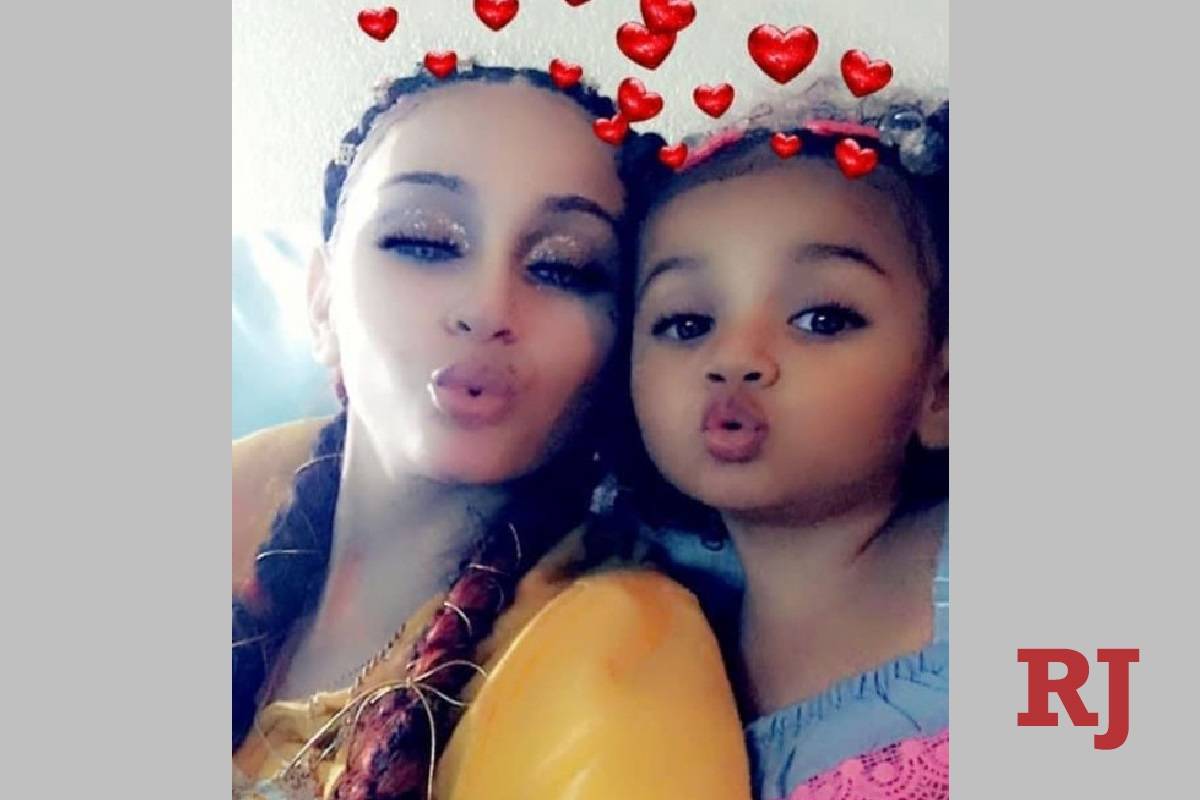 Karissa Armstrong, left, is seen with her 5-year-old daughter Maleyah Robinson, who is on life support after fire crews pulled her from a house fire in North Las Vegas on Saturday morning. (Courtesy)

A 5-year-old girl is on life support after North Las Vegas firefighters pulled her from her grandmother’s burning home Saturday morning.

The grandmother was watching the girl, Maleyah Robinson, and her two siblings when the two-story condo, located at 714 E. Nelson Avenue, caught on fire. The blaze started in an electrical box while the dryer was running, fire officials told Maleyah’s mother, Karissa Armstrong, who was at work at the time.

The North Las Vegas Fire Department is still investigating the cause of the fire, which caused an estimated $150,000 in damage to the home that Armstrong said she and her siblings grew up in.

Armstrong explained that her mother lost all sense of smell during a sinus surgery 15 years ago, so the grandmother didn’t notice anything wrong until her boyfriend ran downstairs and said he smelled something burning. The couple was able to get Maleyah’s 4-year-old brother out, but when they went back in for Maleyah and her older sister, they were met with a wall of flames.

“There were so many flames and so much smoke, so my mom kept telling them to follow her voice,” Armstrong said, adding that her 8-year-old daughter was able to make it out. But Maleyah was stuck in her grandmother’s room at the back of the condo.

Firefighters responded just before 8:30 a.m. and found Maleyah unconscious and not breathing, according to Nino Galloway, spokesman for the fire department. Crews were able to revive the girl before they took her to University Medical Center, where she remained on life support as of Monday evening, her mother said.

”There’s certain things that she does — like when I call her name, she’ll move her eyes or she’ll move — so the doctors said that’s a good sign that her brain is working,” Armstrong said. “Right now, we’re just waiting for her to wake up.”

The grandmother, Lynn Armstrong,was hospitalized with second-degree burns, but she was released from the hospital Sunday evening, according to Maleyah’s godmother Mariah Dukes. Maleyah’s brother and sister were both treated for smoke inhalation and released Sunday morning.

Dukes said Lynn Armstrong had a video chat with Maleyah on Monday, and Maleyah moved a bit as her grandmother spoke to her, which doctors said was a good sign.

Maleyah had a close relationship with her father, who was struck and killed by a car last April while he was riding his motorcycle, Karissa Armstrong said.

”I feel like her father was there with her when it happened,” Maleyah’s mother said of the fire, “because the room that they found her in was the only room that didn’t get touched by the fire. That wasn’t even the room that Maleyah was sleeping in, but by the grace of God she made it into a room that the fire didn’t touch.”

Karissa Armstrong’s aunt created a GoFundMe page Sunday to raise money for the family. People had donated about $6,000 as of Monday afternoon.

A previous version of the story said the GoFundMe was for medical expenses. It is to help replace the family’s belongings after the fire.