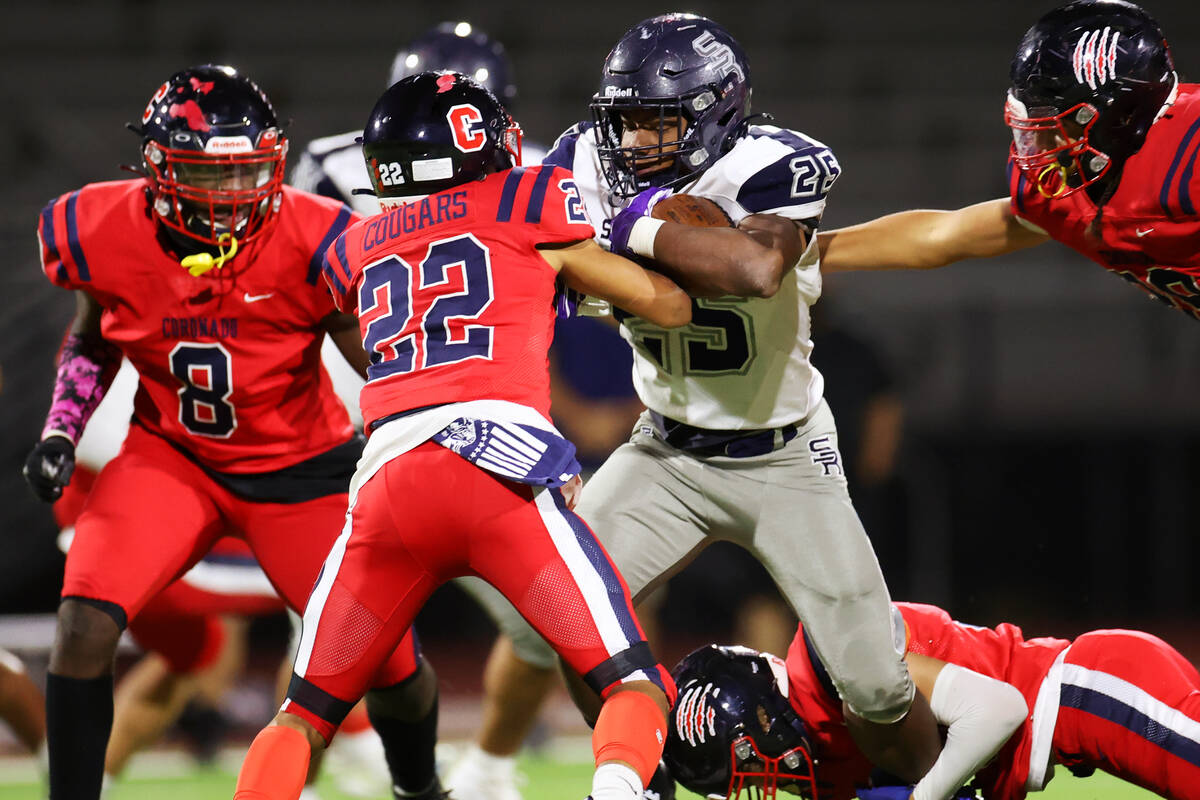 Shadow Ridge's Jaquieze Holland (25) runs the ball before getting tackled by Coronado's Jeremiah Kunitake (22) in the second half of a football game at Coronado High School in Henderson, Friday, Oct. 8, 2021. (Erik Verduzco/Las Vegas Review-Journal) @Erik_Verduzco

Shadow Ridge coach Travis Foster likely won’t have to remind his team of the opponent it faces Friday.

The Mustangs were rolling last season, similar to now, when they went to Coronado and lost 25-21.

Though the defeat didn’t ultimately cost the Mustangs as they still made the Class 4A state title game, that loss is still something the players remember as they prepare for the rematch at Shadow Ridge.

“It’s been a point of focus all offseason — all spring, all summer — hey, ‘This is a game we’ve got to win,’” Foster said.

Shadow Ridge (6-1, 2-0 Sky League) has a much more pragmatic reason to want to beat Coronado (5-1, 2-0) than just to achieve a measure of revenge. A victory would be important for playoff positioning, especially as Foster looks over to the Desert League standings and sees a Silverado team (6-0, 2-0) that continued to serve notice by pounding Cimarron-Memorial 72-0 on Friday night.

“Obviously, it’s a big deal because you know what’s waiting for you on the other side,” Foster said. “You try to put that game off as far as you can. It’s inevitable, but that’s pretty much the buzzsaw that we’re all looking at right now.”

There’s an old saying if a team has two quarterbacks, it really has none.

Some teams have proven to be the exception, and Liberty is one of them. One reason is because each quarterback brings a different skill set, so the Patriots will plug in the QB most needed for a particular situation in a game.

Tyrese Smith, a more traditional dropback quarterback, is the starter. Colin Gregorio, who played wide receiver and safety earlier in the season, is better able to make plays with his feet.

“He’s been a catalyst for what we’ve been able to do,” Patriots coach Rich Muraco said of Gregorio. “He’s kind of taken some of the pressure off Tyrese. Colin is one of the guys whose role probably has expanded the most as the season’s gone along. I think his athleticism at quarterback … has kind of opened up our offense.

“Tyrese hasn’t done anything necessarily bad to lose the starting spot. We just feel like adding Colin gives us another wrinkle that defenses have to prepare for.”

With each quarterback contributing, Liberty is playing like, well, Liberty. The Patriots (4-3, 2-0 Mountain League) have won three in a row, outscoring both league opponents a combined 97-20.

The area’s top Class 5A, 4A and 3A teams are blowing everyone else off the field, and that is happening at the 2A level as well.

The Meadows (6-0, 3-0 Southern League) is putting up ridiculous scores each week, outscoring its opponents by an average of 50-10. If there was any doubt whether the Mustangs were a title contender, those were taken care of with Friday’s 41-0 victory over previously undefeated Lincoln County.

The Meadows, which played eight-man football as recently as three years ago, nearly went all the way last season before losing 35-26 to Yerington in the state championship. With 12 seniors back from that team, The Meadows is showing it is ready to take that final step.

In addition to Coronado-Shadow Ridge, other games to keep an eye on Friday are Green Valley at Liberty, Legacy at Bishop Gorman and Cheyenne at Silverado.