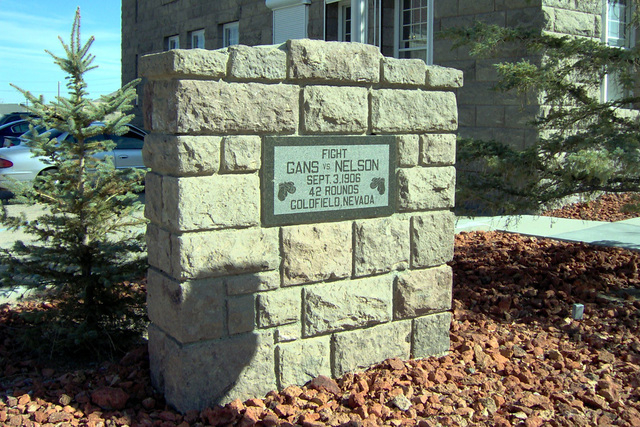 These days it’s just a junk-strewn lot off U.S. Highway 95 in the heart of Goldfield.

For true boxing fans, the site of the Sept. 3, 1906, lightweight championship fight between Joe Gans and Oscar “Battling” Nelson ought to be sacred ground. Not only was it where the longest fight in modern boxing history took place — 42 rounds! — it also helped propel outlaw Nevada into prominence as a haven for the “sweet science.”

Historians and scribes can justifiably point to other Nevada matches as holding importance in the history of the fight game in the state, but for many aficionados the answer is Gans-Nelson — the “Old Master” vs. the “Durable Dane.”

Rumors of a possible Gans-Nelson fight began more than a year before the Goldfield bout. The men may be largely lost to popular history, but they were well known to boxing fans in the feisty years following the turn of the last century. Boxing was still illegal in many areas of the country and notorious in most.

“Gans has been training faithfully of late in the hope of getting another crack at (Jimmy) Britt and his manager, Al Hertford, would rather see his brown protege take Britt on than the battling Dane,” the Los Angeles Examiner observed March 3, 1905. “Nelson also professes to wish for another chance to turn the tables upon Britt.”

Gans had beaten Britt on a disqualification a few months earlier in San Francisco, but as the days passed attention turned to a big promotion in Goldfield. The town’s promoters, Northern Saloon owner and future Madison Square Garden promoter George “Tex” Rickard chief among many. More than $30,000 was put up for a championship match, an arena was built of pitchy pine, and soon enough word went out far and wide that a lightweight championship bout pitting Gans against the bruising Nelson was on. Nevada political powerhouse George Wingfield and stock hustler George Graham Rice helped promote the event with an eye on increasing their list of investors in mines of undetermined worth. The image of the black man fighting the white man was irresistible to sports writers of the era and captured the public’s fascination.

Thousands flocked from all points of the map to Goldfield, then a center of mining discovery both real and imagined. Goldfield was too big for its britches from the start. Its promising ore deposits were lusty if eventually illusory, and promoters made as much of their fortunes from investors from the East who dreamed of the rush for gold and silver to be found in the West. The Gans-Nelson fight worked not only as a phenomenal feat of fisticuffs, but also as a great way to put the wonders of booming Goldfield in bold type in newspapers across the country.

The best sports writers made the trip to Nevada, and even the famous Jack London was at ringside to record the bout and collect material for future stories. (After watching Nelson and Gans, he was moved to write the short story “The Abysmal Brute” about a character very much like the Dane.)

The mostly white crowd started out in Nelson’s corner, but in short order came to admire Gans for his unflappable grace despite heaps of ridicule and race baiting. By fight day, newspapers that initially had portrayed him a cowardly caricature admitted he was game and showed admirable skill despite the weather that topped 100 degrees and a steady harangue from Nelson and his entourage.

These days, Esmeralda County Justice of the Peace Juanita Colvin occasionally is asked to answer questions about the fight’s history. She’s still amazed how the town accommodated an additional 15,000 boxing fans and national media, the local telegraph office chirping out round-by-round results.

“The amazing thing for me was how quickly the promoters put that together with limited communications,” Colvin says. “They had telegraph and some telephone service. And within about two months they had gold coins stacked up, the arena built, and the advertisements out. It drew a crowd of thousands of people.”

Joe Gans would do most of his talking in the ring.

On fight day, with the weather sweltering and President Teddy Roosevelt’s son Kermit, at ringside, referee George Siler brought the men together at center ring. Despite holding the world lightweight title, Gans was set to receive just $11,000 for the fight with Nelson grabbing the greater share of the purse at $22,500. Gans didn’t quibble much; a recent divorce had left him nearly penniless. He needed the money.

Former Washington Post reporter William Gildea wrote a book on Gans called “The Longest Fight,” in which he highlights the Goldfield experience. Gans was America’s first African-American champion, holding the lightweight title from 1902-08.

Gildea writes: “The sun beat down from a cloudless sky. Heat shimmered off the desert floor. The air was so hot it seemed as if it could turn reality inside out and make wide-open space seem claustrophobic. You almost had to concentrate to breathe.”

The Nelson fight in Goldfield would be the 31-year-old Gans’ 187th as a professional. Nelson, at 24, was in his tenacious prime.

And they were off. Nelson was indeed durable, and peppered his punches with the occasional low blow and errant elbow. Gans was by far the more skilled practitioner, but his sojourn was complicated when he broke his right hand in the 33rd round. He fought the rest of the fight almost one handed, still kept Nelson on his heels, and at one point even helped the Dane to his feet after a knockdown. Nelson returned the favor with another low blow, and by the 42nd round Siler had seen enough. Gans won on a disqualification.

Nelson, badly beaten, bruised almost beyond recognition, and yet bitter, barked for a return match. He would get two and win both at a time Gans, unbeknownst to many, was suffering from a terminal case of tuberculosis. By 1910 he’d be gone, dead in his hometown of Baltimore at age 35.

For his part, Nelson never seemed to quite get over his loss to Gans that day. Although he’d actually defeat the Old Master twice in the next couple years, revenge would not be sweet. When he penned his autobiography some years later, it was clear he was still stinging from his experience in the Nevada desert.

The Dane fought in Havana and Juarez late in his career and lived until 1954. He never again fought in the Silver State.

The 42-rounder in Goldfield would go down in boxing history not only as the longest fight and an early battle of the races — ironically, with the black man coming out as a crowd favorite — but it was also the first major bout captured on film.

Goldfield’s mineral fortunes have risen and fallen in the century since the Gans-Nelson fight, but the town’s golden place in boxing history is secure.