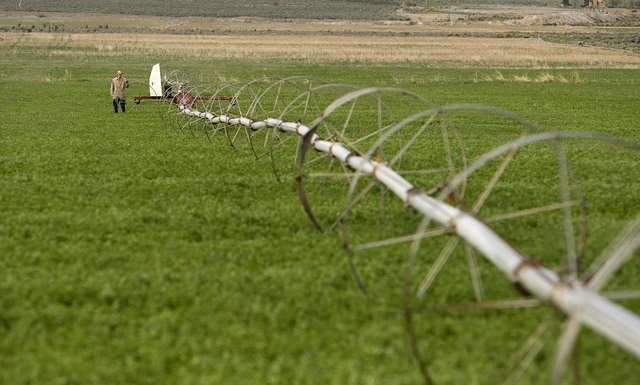 Matt Pickering stands next to an irrigation rig in a field on a Spring Valley ranch owned by the Southern Nevada Water Authority (SNWA) in White Pine County, Nev. (John Locker/Las Vegas Review-Journal)

CARSON CITY – Environmentalists, ranchers, farmers and rural residents lined up Tuesday to oppose a bill backed by the Southern Nevada Water Authority that they say would upend state law and make it easier for large water import projects.

But Andy Belanger, public service director for the water agency, tried to dispel that perception, saying concepts included in Assembly Bill 298 came out of recommendations by the Drought Forum empaneled by Gov. Brian Sandoval.

“One was the authority of the state engineer to do 3M plans,” Belanger said. Those plans involve monitoring, management and mitigation steps to address any conflicts new water applications may have on existing water rights holders or the environment.

“We believe that the water law needs to be clarified in these areas,” Belanger said, but conceded SNWA’s involvement in helping to draft the bill “is a deterrent to some people.”

In a hearing before the Senate Committee on Natural Resources, opponents argued the bill, which has been heavily amended over the past few months, would make it easier for SNWA to import billions of gallons of water from rural groundwater basins near the Nevada-Utah line.

That project involves a 300-mile pipeline and has been on the planning boards for decades, but has yet to be built. It’s also been in the courts for decades and remains in litigation.

“This is not about the water authority’s project,” Belanger said, adding while the pipeline is in the authority’s resource plan, it’s not on the immediate horizon.

Supporters of AB298 included representatives of Southern Nevada homebuilders, business groups, a mining outfit and labor groups. The pipeline is considered a long-range plan to ensure the Las Vegas region has enough water to sustain growth in the decades to come.

Among other things, AB298 seeks to define in law such terms as “perennial yield” and “environmentally sound.”

But the definitions, critics argue, are too broad and subjective, and would put the “little guys” at a serious disadvantage when trying to fight water grabs.

He said it would “open the door to groundwater mining and threaten the widespread destruction of Nevada’s rural communities as well as the state’s wildlife and plant communities.”

Opponents also argued that monitoring, management and mitigation plans are meaningless without specific triggers for when corrective actions are necessary to avoid environmental degradation or harm to other water rights.

The “AB298 moniker may be too tainted” to move forward, she said.