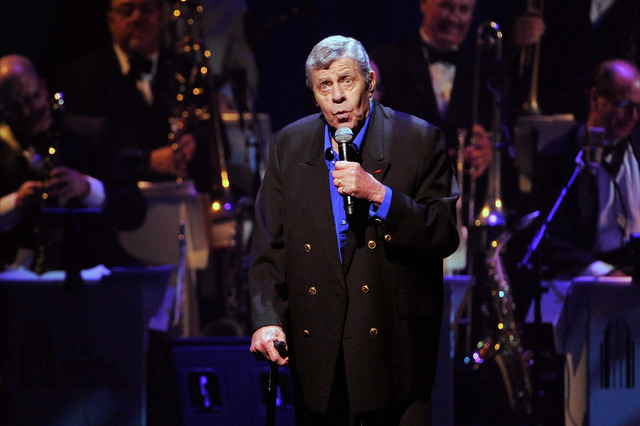 Call it a daydream from a fan, but there’s a show I’d like to see on the Boulevard: Jerry Lewis, Marty Allen and Don Rickles in a night of classic comedy.

Then add Strip legend Rickles, who turns 90 May 8, if he can take time out from his job writing insult material for various presidential candidates.

On second thought, Rickles may not be writing all those political putdowns. His stuff would actually be funny.

With all the promotional and marketing talent on the Strip, you’d think such a grand event comedy would draw a huge crowd.

Probably just wishful thinking, but it would also be a much-deserved tribute. We could use some laughs these days, don’t you agree?

And since it’s my daydream, I’ll let Lewis, Allen and Rickles fight for top billing. After their naps, of course.

DOWNTOWN DUSTUP: Downtown continues its evolution into a popular site for concerts, festivals and public art displays, and some longtime residents and property owners say their quality of life concerns are being drowned out by all the noise.

Their latest lament involves the upcoming Las Vegas 2016 Life Cube exhibit on Fremont Street between 9th and 10th streets. Their complaints are focused on the burning element of the exhibit, which is intended to inspire artistic endeavor and general creativity.

Vocal property owner Doug DiMasi, never afraid to challenge City Hall, writes, “No neighborhood should have to endure event after event to its own detriment. Try to permit this close to the Mayor (Carolyn) Goodman’s home and her neighborhood would be up in arms just as ours. The only difference is affluent neighborhoods have a voice at the council level and we are being denied adequate representation because of one wealthy developer treated with special attention with no regards to our plight.”

The Life Cube project is the creation of Scott Cohen, who is a big believer in writing down life goals and inspiring young people.

Cohen told the Reno Gazette-Journal earlier this year, “I have a belief in my heart that I have lived since I was a teenager, that if you write down your goals, dreams, wishes and aspirations, the probability of them coming true is much higher.”

Maybe DiMasi needs to start writing down his goals, too.

JUNIOR’S OVATION: There’s no question Frank Sinatra Jr., who died Wednesday at age 72, spent his life in his famous father’s shadow. Who wouldn’t have?

But it was heartening to see him appear to grow more comfortable with himself over the years. There was a time he seemed downright irascible with the press. And you have to respect his work ethic.

Sinatra Jr. did it his way, too.

ON THE BOULEVARD: Longtime Nevada legislator John Oceguera did the smart thing by ending his campaign for Congress. Others in the crowded CD4 race should follow his lead. … Nevada legislators are among the elected officials whose actions at a standoff at an Oregon wildlife refuge are again being scrutinized in the press. According to at least one account, some were advised to steer clear of the scene by FBI agents. It was a strong suggestion they ignored. … Everyone’s Irish on St. Patrick’s Day, but the ladies of Killian’s Angels are Irish every day. The energetic local band keeps rocking tonight and Saturday night at Brendan’s Irish Pub at The Orleans. … Natalie Young’s latest culinary creation downtown is Chow at 1020 Fremont Street next to the Writer’s Block bookstore. Nothing like Southern-fried chicken with Chinese dishes to remind you you’re not in Kansas anymore. Side by side, the two new businesses offer a clear sign downtown is changing for better.