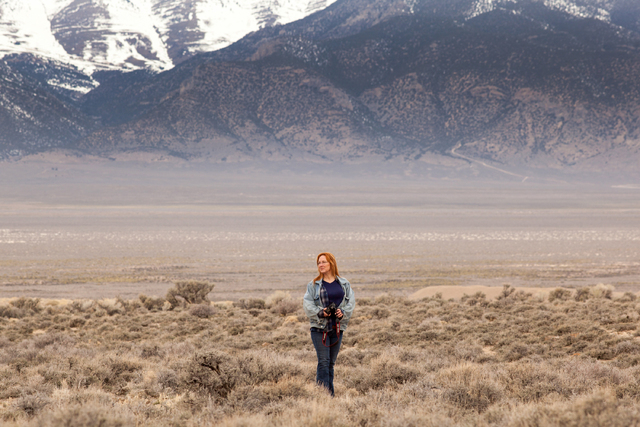 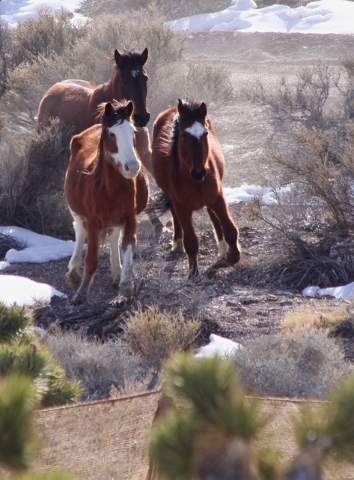 This picture was taken in Feb 2016 near Caliente, Nev. in which the BLM rounded up 120 wild mustangs. Due to an aggressive federal government policy, there are more wild horses in captivity than there are on the range. Leigh said the horses were treated well in this roundup, a fact she credits to her vigilance. Photo by Laura Leigh 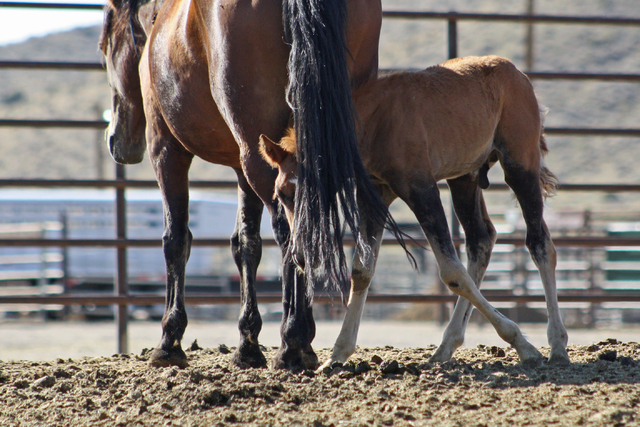 This picture was taken in 2012 at BLM holding facility for wild horses called the Palomino Valley Center, where horses are often crammed into small space. Litigation filed by Laura Leigh has helped open us such centers to public scrutiny. the colt in the picture was severely injured and later died. Photo by Laura Leigh 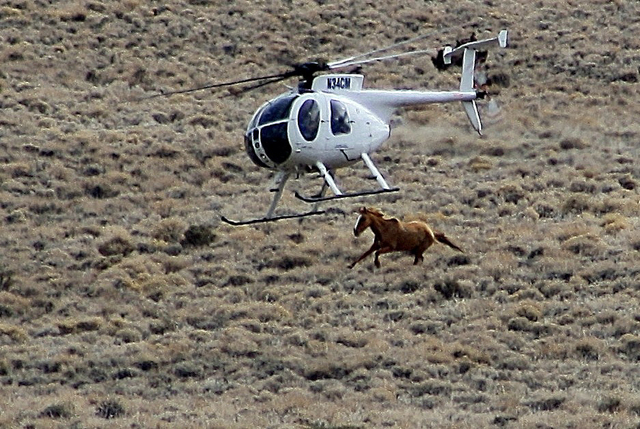 This picture was taken during a BLM roundup in 2011 in Antelope Valley, an hour north of Ely. Often, contractors hired by the BLM will use their helicopters like a battering ram to steer the willful mustangs toward a waiting trap. Because of litigation filed by Laura Leigh, they can no longer continue this practice. Photo by Laura Leigh 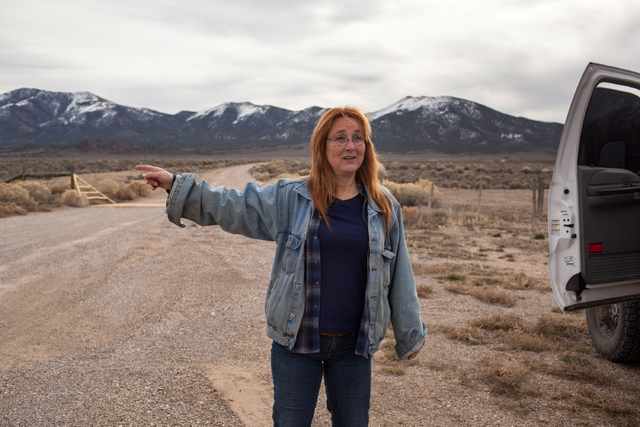 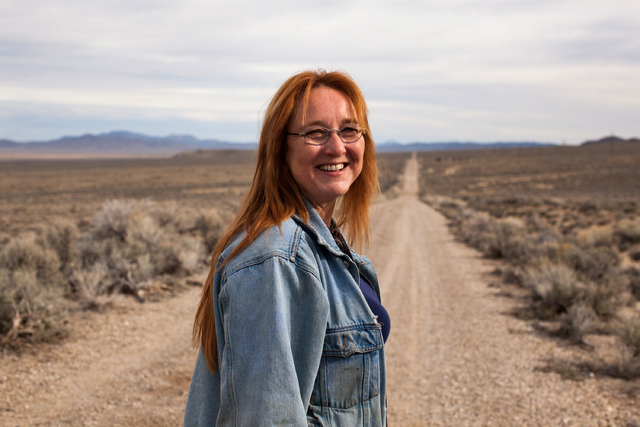 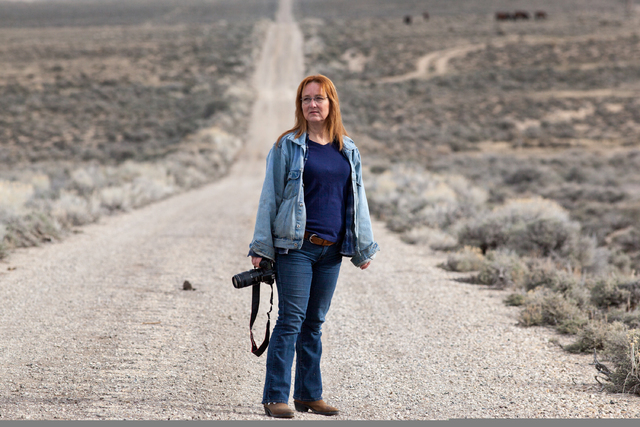 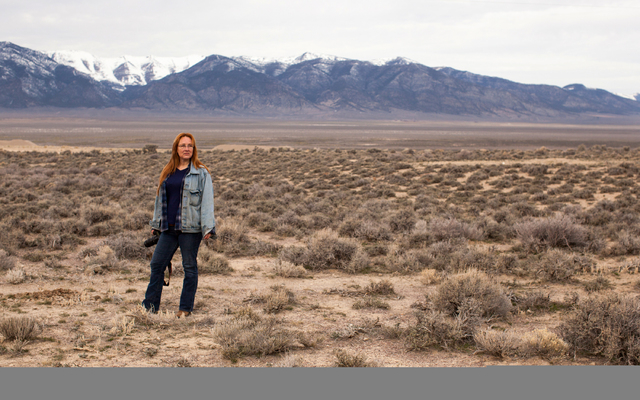 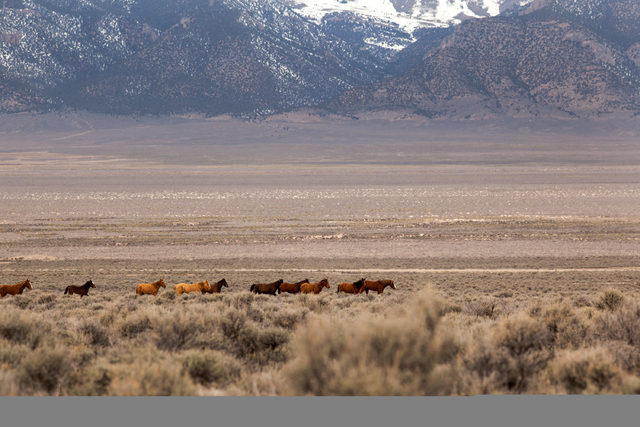 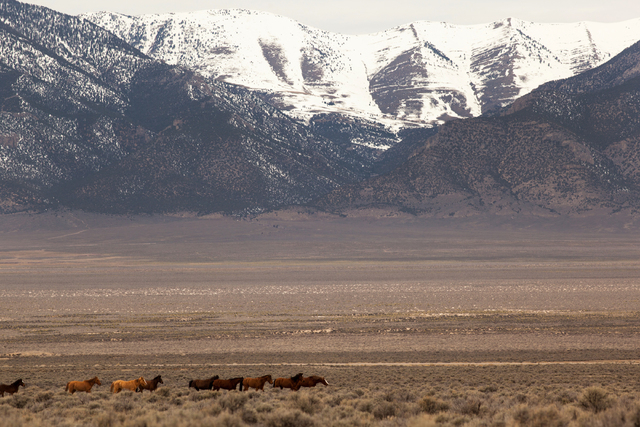 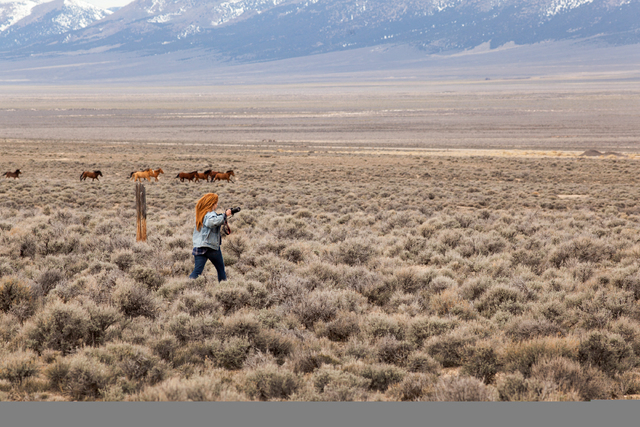 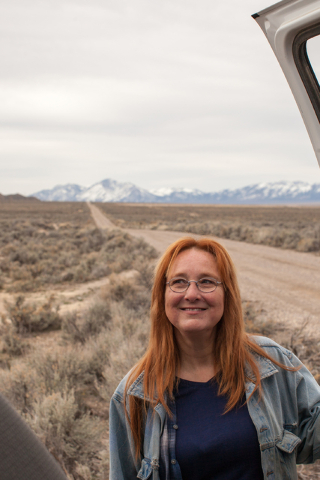 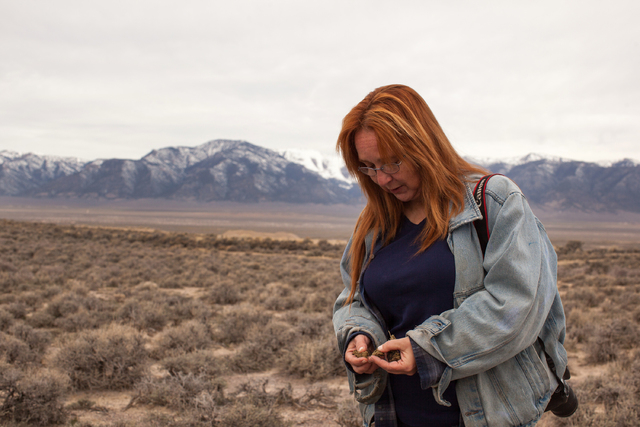 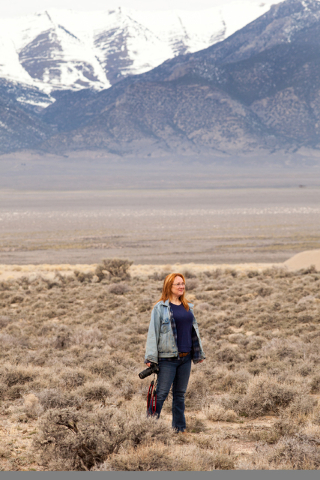 Horse activist Laura Leigh drives a monster-sized truck, an imposing Ford F-250 4-by-4 with its chassis jacked up so high she often must tumble down from the driver’s seat, the vehicle’s battered white finish filthy and mud-caked from all of her bumpy, teeth-loosening, off-road escapades.

It’s her fourth pickup truck in seven years — the cost of a controversial 100,000-mile annual journey across six western states and a nomadic lifestyle that often means sleeping inside her truck cab or in cheap motels, guzzling reheated gas-station coffee and downing peanut-butter sandwiches behind the wheel. She’s always red-eyed, always on the road.

She’s a tough-talking New Jersey native with long red hair, cowboy boots and a tattered denim Carhartt jacket, a woman who slides into a Sopranos-like accent when she talks about her blue-collar childhood riding and caring for horses, telling tales of the city girl who went to school smelling like horse manure, who quickly fell in love with the animals’ indomitable spirit.

In 2009, Leigh fled an abusive marriage in Washington state and moved to Nevada to become a high-desert loner. Four seasons a year, she documents the actions of conservative tight-lipped ranchers whose free-roaming cattle compete with mustangs for precious grass. And she challenges federal officials from the Bureau of Land Management, the government stewards of the public lands whose policy is often to remove the horses from the range.

Leigh chronicles the story of the mustangs, these symbols of the American West, watching intently as the wild-eyed, bucking and kicking animals are herded by helicopter into corrals and loaded onto tractor-trailers. Some have been adopted. Many have been sold later, only to end up in foreign slaughterhouses.

Her tools include the high-resolution cameras she uses to capture images of horses that are injured and killed during the frequent BLM roundups; her often-graphic photos and videos are posted on her website, www.wildhorseeducation.org, and used as evidence in court cases she files on behalf of the mustangs. Her lawsuits have helped to successfully open horse-gatherings and holding yards to public scrutiny and create safer conditions for the animals.

Rolling down the highway and off-roading among the sagebrush, her 9mm handgun tucked away for protection, blasting Metallica and the Boss on her truck stereo, she’s become a sassy Bruce Springsteen of the Nevada outback.

She has made enemies, using her camera to document ranchers who graze their cattle out of season. She’s been the subject of unflattering coverage in cowboy-centric publications such as Nevada Rancher and Range magazine, which pointed out that her last name rhymes with “pee,” a woman “Hollywood would have cast as a schoolmarm.”

Leigh, the magazine wrote in its most recent issue, “is a self-appointed wild-horse expert and, depending on the day, is either a venomous critic or a volunteer of and for the BLM. Her issue-driven-propaganda-producing fundraising website spins the ongoing plight of wild horses from an anti-ranching, anti-livestock point of view.”

Leigh also has received ominous telephone calls: “I know you have a daughter,” a male voice threatened, “and I know where she is.”

But Leigh carries on. With her camera and video recorder, she jokes, she’s like a hunter without a season.

In 2010, Doug Furtado, BLM’s Battle Mountain District manager, invited Leigh to a meeting at a Reno hotel after hearing about this one-woman wrecking crew.

“There wasn’t a lot of trust there at first,” he said. “She was upset with how the BLM was managing wild horses.”

He now views Leigh as a sensible and formidable voice on the mustang issue. Furtado keeps a white grease board in his office to track the BLM roundups Leigh’s advocacy has helped quash. He talks of her with a plain-spoken deference.

“Her favorite thing is having the conversation,” Furtado said. “And she’s willing to do that with anyone willing to open that door. You can’t say that about all horse advocates.”

When it comes to the mustangs, though, Leigh sticks to her guns: She insists wild horses are scapegoats for range damage done by domestic cattle and sheep, and disputes BLM claims that horses are dying of starvation and need to be removed for private adoption.

Leigh fumes at government officials she says believe anything said by someone in a cowboy hat. She dislikes patronizing men who believe the high desert is no place for a single woman.

“Any conversation that starts with ‘Laura, you need to understand …’ Well, we ain’t havin’ that conversation,” she said. “I just tell ‘em, ‘We’ll see ya in court.’”

The last years have tested her willpower and stamina. Since 2012, when Leigh was diagnosed with breast cancer, she has undergone eight surgeries and was severely injured as a passenger in a head-on car collision. Through it all, she has ignored the advice of friends and doctors, staying in bed just long enough to muster the energy to return to the range.

The battle for the wild horses sustains her, giving sharp focus to the life of a once-abused woman willing to fight for what she loves, she said.

“Horses have the largest eyes of any land mammal,” Leigh said. “They’re windows to the soul. In the eyes of those free-running mustangs, we can see ourselves.”

In 2010, Leigh’s advocacy began in earnest when she documented a roundup in which an 8-month-old colt was pushed so hard by preying-mantislike helicopters over frozen volcanic rock that the animal’s hooves literally began to fall off, she said.

In the ensuing years, she would take pictures and video of injured and dying horses. She filed numerous lawsuits, including one seeking access to BLM roundups closed off to the public. That suit was eventually upheld by the 9th U.S. Circuit Court of Appeals.

At first, she was timid, seeing her name listed against the U.S. government in legal papers. But she pressed on. She filed freedom-of-information requests and litigation that halted abusive tactics on the range. Horse gatherers contracted by the BLM can no longer gather mustangs if the weather is too hot or cold. They can’t use whips or electrical hotshots or ram the fleeing animals with helicopters.

“The contractors have accused me of trying to create a drama storm,” Leigh said. “The images I take aren’t about the drama; they’re about the continued welfare of wild horses.”

On down the road

Leigh’s pickup eases down a rutted dirt road in the middle of Antelope Valley north of Ely. She’s on the lookout for mustangs, making sure they aren’t underfed or blocked from water sources by ranchers. In the back lies a scattering of hay. The cab resembles a cluttered ancient tomb before an excavation, or the domain of a horse activist always on the road.

She points to a Canon camera with a long-range lens: “That one won all those court cases,” she said, motioning to another on the dashboard. “This one shoots 11 frames per second.”

She’s on the scent of a herd of mustangs she’s spotted on the horizon. She hops down from the truck, picking her way through the scrub brush. She bends to pick up a fistful of wild horse manure, breaking open one pod to show the animals’ diet.

That’s Leigh. In her Jersey voice, she vows to keep “riding across the West, looking for a fight.”

“I’ve listened to people talk about how the horses are doing all the destruction, and then I tell them, ‘Now, when can I slap the crap out of you?’”

She’s joined by Jeanne Nations, a local property owner who sits on a BLM advisory board. Nations is a blonde-haired woman who gets Leigh’s mission. The two stand near Leigh’s truck talking horses when Nations spots a band of mustangs on the run, coming their way.

The eight horses gallop across the landscape as though it were still 1870, their hair in the wind, the color of the lone colt matching Leigh’s red hair. She grabs a camera and hustles in for a better angle, the other woman behind her.

Then Nations stops and just watches the horse activist doing what she loves most.