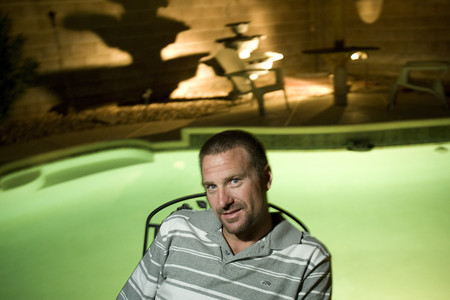 Byren Stuckey knew in June that he was going to get his revenge on Bank of America. He just didn’t know when, or how.

First he had to get home from San Diego after the bank froze his account.

You need to know a few things about Stuckey. First, he’s 33, a union ironworker out of work for six months.

Second, he has a girlfriend, 20-year-old Maggie Krause. “Nothing shocks me with him,” she says.

Stuckey wanted to exact his own brand of justice not because banks, including Bank of America, have been blamed for partly causing the deep recession we’re in, or that Bank of America was the fifth-largest recipient of government bailout money, at $45 billion.

No, his motivations were far more personal.

Shortly after arriving in San Diego, on vacation, with his boat and his girlfriend and expectations of a good time, Bank of America put a freeze on his account.

The $9,000 he deposited the week before? Inaccessible, a customer service representative told him. He found himself stranded in another state with no money.

“I had to beg, borrow and steal to get home,” he says.

But get back to his Henderson home he did, and he quickly started plotting how to “get them,” as he says.

Stuckey remembered the safe deposit box the bank gave him when he opened his account. He pulled out the contract and read through it.

He didn’t see anything telling him what he couldn’t put in the box. (He missed the part that prohibited perishable items.)

And that’s where he got his idea.

Stuckey, an avid fisherman, thought of the worst smells he has encountered. The anchovy bait he uses to catch stripers at Lake Mead was high on the list.

So he had a friend stop by a local Wal-Mart and pick up a package of them for him. The 10 gray fish come frozen, in a loose-fitting plastic bag about the size of a sandwich bag.

And they smell. Bad.

But the fish weren’t enough. He then proceeded to urinate into an empty plastic bottle.

Now, during this time in between his failed vacation and when he was going to launch his attack, he tried to receive an explanation from the bank about what went wrong.

All he was told was that his account had been flagged for “ChexSystems,” a sort of blacklist for problem accounts or customers that the banks use and share with each other.

Stuckey says he doesn’t know why it would be flagged, but he hasn’t been able to open accounts at other banks since.

The bank refunded his money, but he was allowed to keep his safe deposit box.

On Aug. 29, a Saturday, Stuckey stuffed the anchovies and the bottle of human waste into a zippered bank bag and drove to the Bank of America at the Galleria at Sunset mall.

The bag of anchovies, which had been sitting in the bed of his pickup for two days, was already leaking a foul-smelling ooze.

He went into the bank, past the burly security guard, and was given box 42231.

He went into a private room, unzipped the bank bag, placed the anchovies in the box, and removed the cap on the bottle before placing it in the box.

“I thought those things were airtight, but I guess not,” he says. “It was smelling right away.”

“I was at peace. I needed closure,” he says.

Stuckey thought that would be the last he would hear from the bank.

When the bank reopened Monday morning, employees noticed a “nauseous” odor coming from the bank vault where the safety deposit boxes were stored, according to Stuckey’s arrest report.

The smell was so powerful that employees and customers had trouble breathing.

By 10 a.m., the police were called, and they brought with them a slew of officers, the fire department, and an all-hazards task force that handles terrorist events and chemical and explosive attacks.

The bank was evacuated, closed and surrounded.

He says five officers, at gunpoint, showed up at his home. They asked if he had been to the bank lately.

Stuckey, incredulous, told them yes, that he was upset with the bank and that there were anchovies in the box.

He says some of the officers got a kick out of it.

Box 42231 was drilled into, and investigators found there was more than anchovies inside. The officer standing with Stuckey got on the radio and turned serious.

“What else is in the box?” the officer asked Stuckey.

That’s when Stuckey was told he was going to jail.

The Henderson municipal code includes a law that seems written specifically for Stuckey’s act: “It shall be unlawful to sell or use any stink bomb or other nauseous or ill smelling preparation, designed or intended to annoy persons within the limits of the city of Henderson.”

Box 42231 was ruined when it was drilled into, and so he was charged with “injury to other property,” a misdemeanor. Authorities also tacked on the charge of “stink bombs.” At the most, he’ll have to pay $150 to replace the box and face up to six months in jail and/or a fine of up to $1,000.

He spent the rest of the day in the Henderson Detention Center until his girlfriend paid $270 to bail him out.

People at the jail were laughing about the incident, he says.

He says the whole ordeal was worth every penny.

“Everybody’s pretty amused with it, I guess,” he says matter-of-factly. “The best part of all is they shut down the bank.”

He’s done with Bank of America now and is going to try his trip down to San Diego again soon.

Except he wants to make one more trip to that branch.

He wants the $25 deposit he put down for the key to the safety deposit box back.