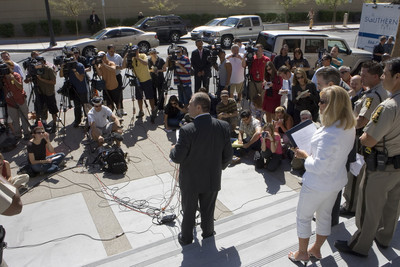 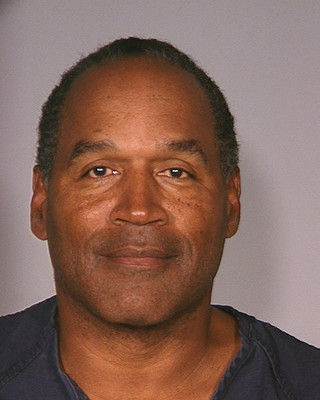 As O.J. Simpson was wrapping up his first full day behind bars in the county jail, a Las Vegas man who is alleged to have helped him steal about $75,000 worth of sports memorabilia was on his way to the same lockup.

Stewart brought with him a "substantial amount of the stolen memorabilia," which police photographed and booked into evidence, said Capt. James Dillon, head of the Metropolitan Police Department’s robbery and homicide bureau.

Police said another suspect who was wanted in connection with the sports memorabilia heist, 49-year-old Michael McClinton, contacted police and told them he would turn himself in.

But police said McClinton, of Las Vegas, was still at large at about 8:15 p.m. Monday. Police were searching for two unidentified men who allegedly took part in the armed robbery.

Dillon issued an ultimatum to the three suspects who remained on the run.

"We’re not playing games with any of these individuals," he said. "They are to turn themselves in immediately."

McClinton, Stewart and Simpson are accused of committing an armed robbery of two sports memorabilia dealers Thursday at Palace Station.

On Monday, police announced that they had cleared a man whom they had said Sunday was wanted in connection with the robbery.

Thomas Scotto of Miami, who had come to Las Vegas to renew his wedding vows, was not with Simpson and the handful of other men when they took the sports memorabilia from the Palace Station hotel room, said Lt. Clint Nichols of the Metropolitan Police Department’s robbery unit.

"There was no way he (Scotto) could have been involved," Nichols said.

Scotto was "incorrectly pointed out as one of the individuals" involved in the theft, Nichols said. He said police had interviewed several people who provided Scotto with an alibi, saying that he was at the Palms on Thursday night when the armed robbery occurred a little more than three miles away at Palace Station.

Simpson attended Scotto’s vow renewal ceremony Saturday at A Little White Chapel, on Las Vegas Boulevard near Charleston Boulevard, the night before police took the football legend into custody on multiple charges, including robbery with a deadly weapon and assault with a deadly weapon.

Simpson was all smiles in video of the ceremony that aired on KVBC-TV, Channel 3. He asked the news crews at the ceremony: "Why are you guys here? Some people are trying to get married!"

He moved about the crowd and posed for photos with guests and was seen chatting and laughing.

Simpson, who has refused interview requests since his arrest, responded to reporters’ pleas that he talk to them at the wedding chapel. But he did not say much about the Palace Station incident.

Simpson was the last guest to leave the ceremony as he was ushered through a side door surrounded by two other men. Whistling the "Wizard of Oz" tune "If I Only Had a Brain," Simpson ignored reporters’ questions. Once inside a white vehicle, Simpson finally gave reporters a response to their questions about what happened. "I got married," he teased with a grin.

The images of a smiling, jovial Simpson couldn’t be more different from the menacing voice heard on an audio recording posted on the celebrity news Web site TMZ.com.

The recording reportedly was made by Thomas Riccio, an ex-con turned celebrity memorabilia dealer who had set up the Palace Station meeting between Simpson and sports memorabilia dealers Alfred Beardsley and Bruce Fromong. Riccio reportedly had told the men that he had a wealthy prospective buyer who was interested in their merchandise.

Las Vegas police detectives had downloaded the audio clip from the TMZ.com Web site and were awaiting a full copy of the recording from Riccio’s lawyer, Dillon said.

The recording, if authenticated, could be valuable to the investigation because it would provide an unbiased and accurate account of what happened in the room, he said.

"This could be huge," Dillon said. "It could be a benefit or damaging to O.J. Simpson and his associates."

The 60-year-old Simpson spent Monday in a 7-foot by 14-foot cell at the Clark County Detention Center.

Simpson’s cell is one of several along the walls of a "pod" that includes an open area for free time. The pod holds 36 other inmates, but because of his celebrity status, Simpson is being kept locked in his cell while the other inmates are on free time, jail officials said. They said Simpson will get three to four hours of free time each day while his pod mates are locked in their cells.

Simpson asked for a pair of reading glasses and has been cooperative, officials said.

Simpson’s meals are basic fare and could include spaghetti for lunch and enchilada casserole for dinner.

A jailhouse minister gave him two pairs of glasses, a Bible and a book from the "Purpose Driven Life" series. The Heisman Trophy winner has been visited by five attorneys, two of whom are public defenders, officials said.

Guards on duty aren’t allowed to ask Simpson for his autograph. Those who have been around him said he has been amiable with the personnel, a corrections staffer said.

"We’re just treating him as we would as if he was anybody else. We’re being professional. We’re not acting as fans. We’re not going down that route," the staffer said.