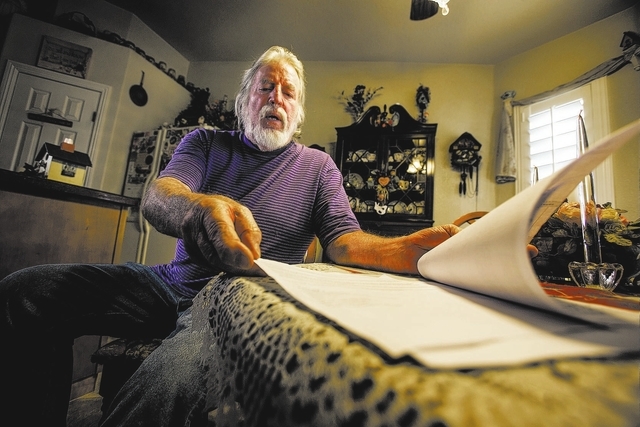 Vietnam combat veteran Kenneth Van Eaton views files from medical records in his northwest Las Vegas home on Monday, Jan. 6, 2014. Van Eaton, 69, waited 11 hours at the North Las Vegas VA Medical Center in September for pain relief and treatment for his foot that was swollen red with gout. He spent most of the time on a gurney in the hallway at the emergency room only to have a doctor go home on a shift change. (Jeff Scheid/Las Vegas Review-Journal) 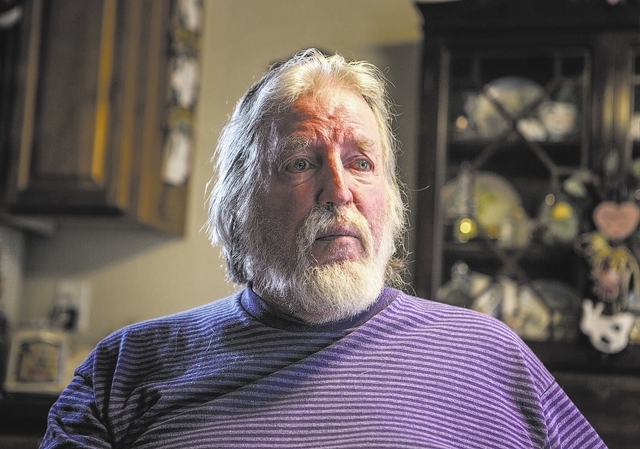 Vietnam combat veteran Kenneth Van Eaton views files from medical records in his northwest Las Vegas home on Monday, Jan. 6, 2014. Van Eaton, 69, waited 11 hours at the North Las Vegas VA Medical Center in September for pain relief and treatment for his foot that was swollen red with gout. He spent most of the time on a gurney in the hallway at the emergency room only to have a doctor go home on a shift change. (Jeff Scheid/Las Vegas Review-Journal)

As an infantry sergeant in the Vietnam War, he carried his radioman to the safety of a rescue helicopter after they were both wounded by a rocket-propelled grenade in 1968.

For his valiant efforts in combat during the war that claimed the lives of some 200 soldiers in his 1st Infantry Division units, he was awarded the Bronze Star and Purple Heart medals.

Flash forward 45 years. Now the 69-year-old Army draftee veteran is worried that the Department of Veterans Affairs Medical Center five minutes from his home in the north Las Vegas Valley won’t be able to save his life if he has a medical emergency, especially one involving his enlarged aorta artery.

From his observations, the emergency room is too busy and understaffed to handle the number of veterans seeking emergency care.

“If they take me there in an ambulance if I have a heart attack, they will send me to another hospital. If I die in transport, they will be liable,” he said about the VA Medical Center.

Van Eaton is one of dozens of veterans who have called or sent emails to the Review-Journal expressing concerns about long waits and mistreatment by staff at local VA facilities after a Nov. 27 story about blind, diabetic Navy veteran Sandi Niccum. She waited six hours Oct. 22 in pain at the VA Medical Center emergency room suffering from what private doctors at a Henderson hospital diagnosed three days later as a ruptured, abscessed colon and a large, unspecified mass on her abdomen. She died Nov. 15 at age 78.

Van Eaton’s concern stems from what VA paperwork shows was a nearly 11-hour experience at the center’s emergency room and pharmacy on Sept. 30 that Van Eaton says actually happened on Sept. 29 and 30 after his wife took him there for a non-life-threatening case of gout.

The flare-up caused his foot to swell and turn red. It was so painful, he couldn’t walk. “It was like someone was sticking a knife in my foot,” he said Monday.

After he checked in the emergency room at 1:30 that afternoon, he told a VA staff member that he had gout, based on a previous diagnosis by a private doctor.

“I thought it’s a simple thing. I’ve got gout. Give me some pills and I’ll go home,” he said.

Instead, he sat in the waiting room for two hours. Then he was put on a gurney and rolled to a hallway where he said he spent most of the next eight hours except for when he was given an ultrasound to check for blood clots and an X-ray for any broken bones. After the shift ended for the doctor who had ordered the tests, another doctor came out about 11 p.m. to tell him what he already knew: that he had gout.

A prescription was written for two medications — indomethacin and colchicine — and filled at the hospital pharmacy at 12:05 a.m. on Oct. 1, according to Van Eaton’s receipt from the pharmacy. His medical record shows he entered the emergency room at 1:30 p.m. with a discharge notation at 11:22 p.m. on Sept. 30.

On Tuesday, a VA spokesman said in an email that the emergency room discharge note “is not representative of when he was discharged.” The spokesman, Richard Beam, earlier had said he was told Van Eaton was discharged around 8 p.m., but he couldn’t immediately explain the four-hour gap that Van Eaton endured until his prescription was filled.

When asked about Van Eaton’s case on Friday, Beam wrote that he was triaged for the level of care he needed. “Any perceived delay in care was due to other patients needing more emergent attention.”

Van Eaton said the wait he experienced “was ridiculous.” He also found out this week that his regular appointments for health and psychiatric care — he’s rated 100 percent disabled for post-traumatic stress disorder — have been pushed back by months because of lack of staffing.

“I think they need a major overhaul,” he said.