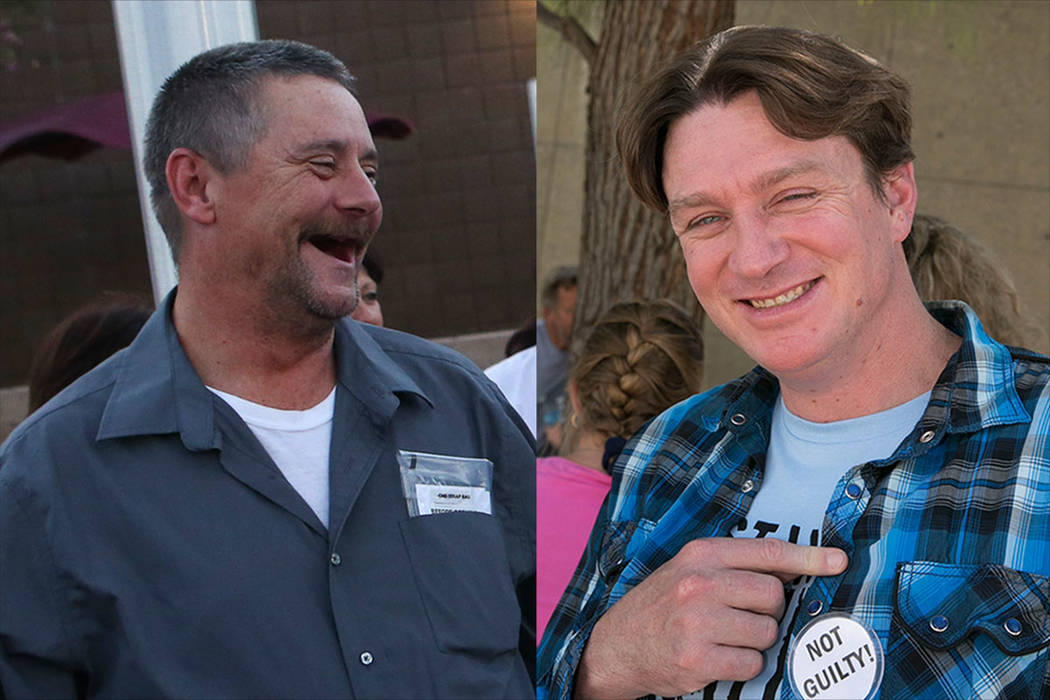 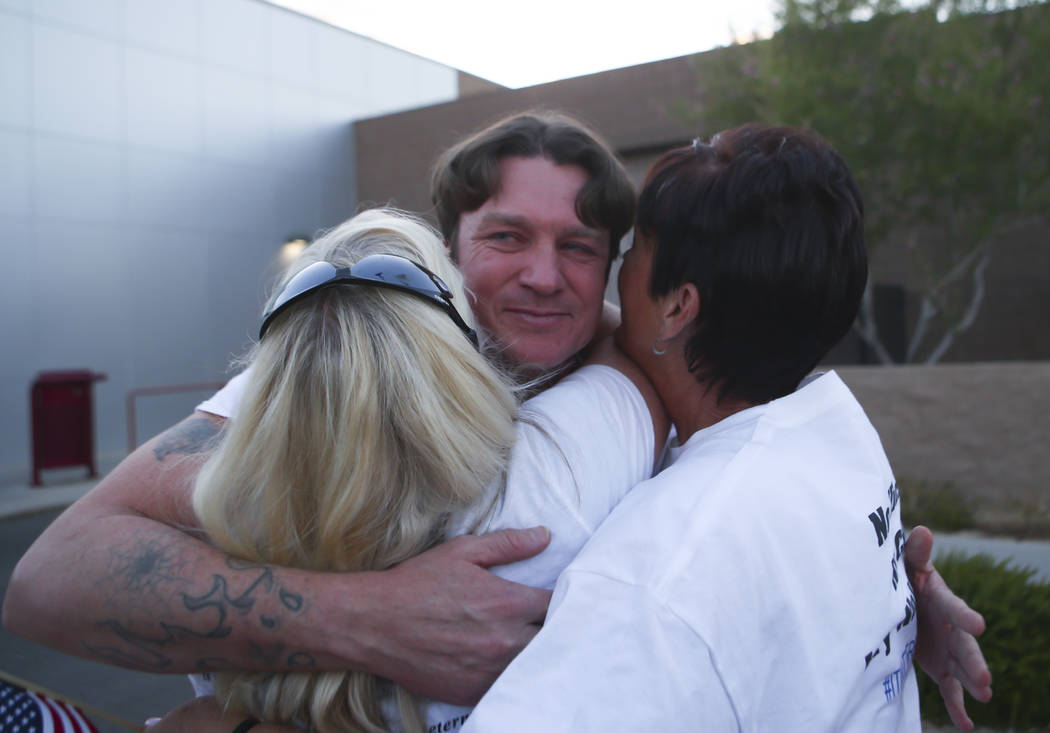 Steven Stewart is embraced after he and three other defendants in the Bunkerville standoff case were released at the Henderson Detention Center on Tuesday, Aug. 22, 2017. Chase Stevens Las Vegas Review-Journal @csstevensphoto 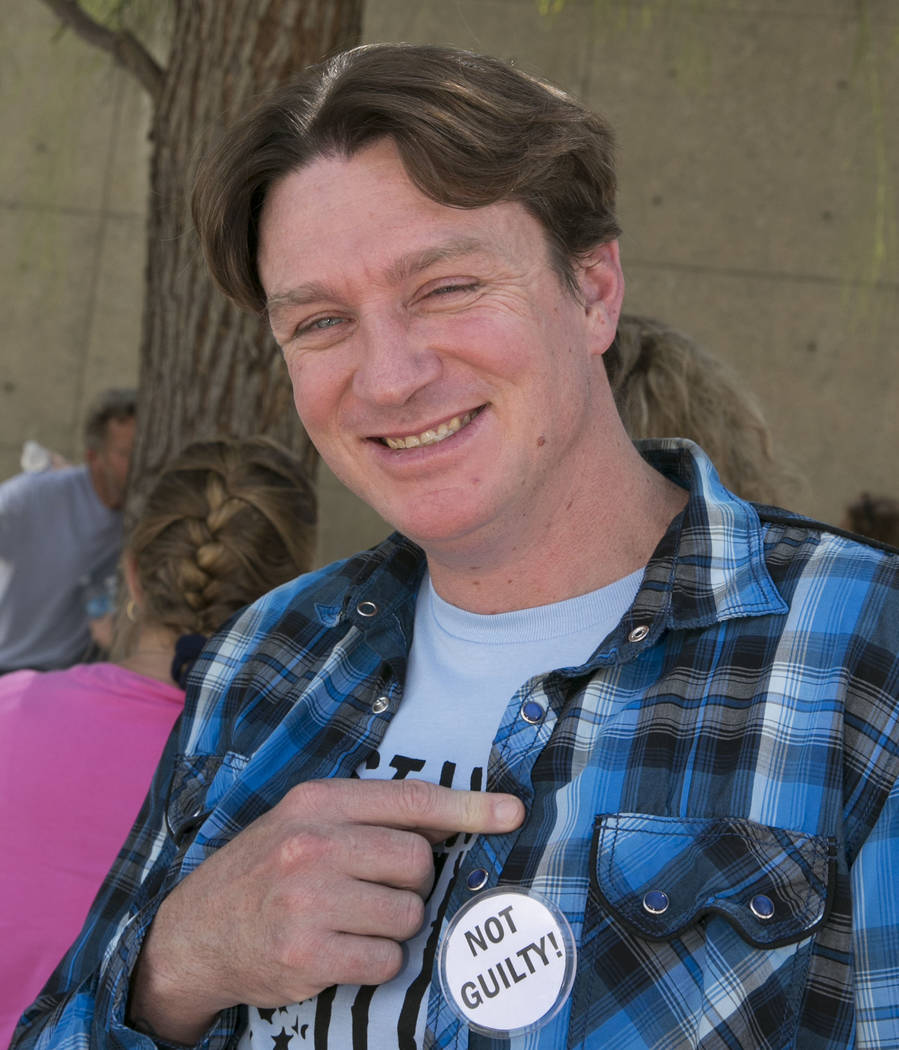 Steven Stewart shows off his 'Not Guilty' pin outside the Lloyd George U.S. Courthouse on Wednesday, Aug. 23, 2017, in Las Vegas. Stewart and three other defendants in the Bunkerville standoff case were released from the Henderson Detention Center on Tuesday. (Bizuayehu Tesfaye/Las Vegas Review-Journal) @bizutesfaye 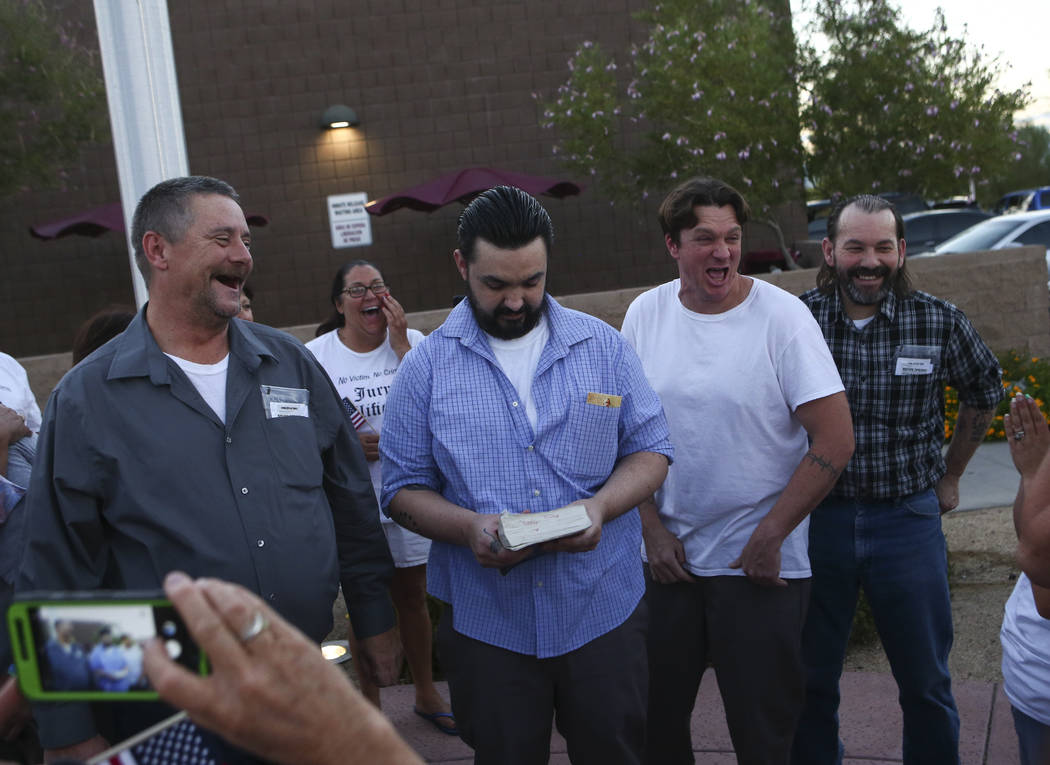 Defendants in the Bunkerville standoff, from left, Ricky Lovelien, Eric Parker, Steven Stewart and Scott Drexler after they were released at the Henderson Detention Center in Henderson on Tuesday, Aug. 22, 2017. Lovelien and Stewart were acquitted of all 10 counts they faced. Chase Stevens Las Vegas Review-Journal @csstevensphoto 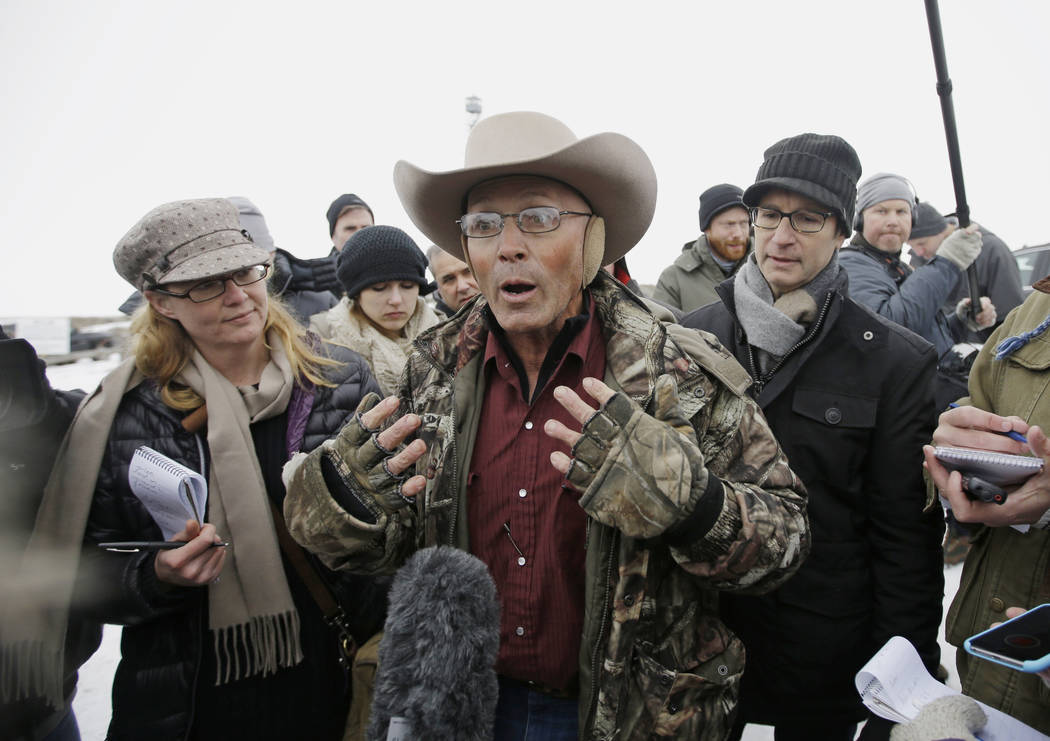 FILE - In this Jan. 5, 2016 file photo, Robert "LaVoy" Finicum, center, a rancher from Arizona, talks to reporters at the Malheur National Wildlife Refuge near Burns, Ore. A jury is deliberating whether an FBI agent lied about firing shots at Finicum, a militia leader who participated in the armed takeover of the Oregon wildlife refuge. The Oregonian/OregonLive reports prosecutors and defense lawyers for W. Joseph Astarita made closing arguments and that a jury of three women and nine men began deliberating Thursday afternoon, Aug. 9, 2018. (AP Photo/Rick Bowmer, File)

A pair of former defendants cleared of federal charges in the Bunkerville standoff have filed a lawsuit against the prosecutors who took them to trial, with other government authorities.

Rick Lovelien, of Montana, and Steven Stewart, of Idaho, are asking for $60 million in the lawsuit, which names Las Vegas prosecutors Steven Myhre, Daniel Schiess and Nadia Ahmed as defendants and includes former FBI Director James Comey, former Bureau of Land Management Director Neil Kornze and the agencies of the FBI and BLM. The lawsuit was filed in Washington, D.C., this week.

In August 2017, jurors acquitted the two men of 10 charges that could have sent them to federal prison for decades.

During that trial — the first of what would be three in the case — U.S. District Judge Gloria Navarro barred the defense from referencing constitutional rights to freely assemble and to bear arms. She also prohibited mention of alleged misconduct or excessive force by law enforcement.

A few months later, Navarro dismissed charges against Gold Butte rancher Cliven Bundy, two of his sons and another man in the April 2014 armed standoff, which occurred after federal agents tried to execute a court order to round up Bundy’s cattle. The attempt stemmed from a decades-long dispute over grazing fees.

Lovelien and Stewart’s lawsuit was filed by Washington lawyer Larry Klayman, who was blocked from joining Bundy’s criminal defense team by Navarro. Klayman also filed a civil complaint on Bundy’s behalf in January, but that lawsuit was dismissed five months later after the plaintiffs failed to take action, according to court records.

During the standoff, Lovelien’s rifle was harnessed over his shoulder, never pointed at anyone, while Stewart participated in the protest “and at no time injured or threatened to injure any federal or state agent,” their complaint said.

In a statement on his website, Klayman wrote that the government “entrapped, manufactured, and used false evidence to indict peaceful protesters.”

Department of Justice media representatives could not be reached for comment Friday.