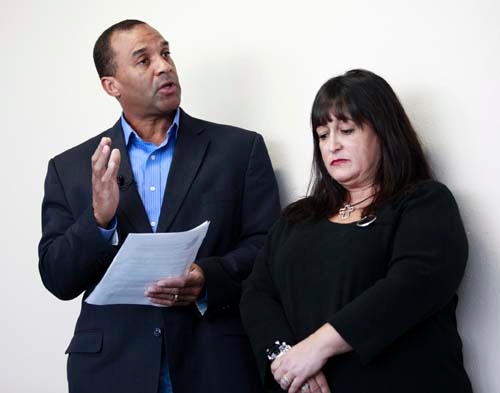 What happened at Victor and Annette Fuentes’ church camp west of Pahrump sounds downright biblical. First their baptismal pond dried up, then the desert camp was flooded with water and mud.

But as far as the Fuenteses are concerned, this wasn’t the wrath of God. They blame it all on a more earthly culprit: the U.S. Fish and Wildlife Service.

The conservative think tank’s Center for Justice and Constitutional Litigation announced this week that it will represent the Fuenteses as they seek to recover more than $85,000 in damages from the federal agency.

"Our goal is to help people when government gets in the way of their liberties," said Joe Becker, the center’s director and chief legal officer. "We’re delighted to come to the aid of this client."

Fish and Wildlife officials deny responsibility for the flood and insist they tried to warn the Fuenteses about what could happen to their property as far back as 2007.

The trouble began in August 2010, when the service rerouted the runoff from nearby springs as part of a habitat restoration effort at Ash Meadows National Wildlife Refuge, a 23,000-acre expanse of natural seeps and streams that harbor several species of protected fish and plants.

The habitat work diverted the flow of water away from the Bible camp, where members of Ministerio Roca Solida, the Fuenteses’ Las Vegas-based nondenominational church, would hold weekend retreats and baptisms.

When the streams stopped flowing and the pond dried up, visitation plummeted at the camp, which used to be busy just about every weekend, said Victor Fuentes, the church’s pastor and co-founder.

"By them taking the river from us, they took our life. It’s as simple as that," he said.

The final blow came on Dec. 23, 2010, less than a month after refuge workers finished their spring diversion project. That is when the camp was hit by a flood that damaged buildings, washed out roads and deposited mud over a wide area.

Becker blamed the damage on shoddy work on the refuge, which surrounds the 40-acre camp, known to church members as Patch of Heaven.

"Their baptismal waters were taken. Then they got back all their water in a way they didn’t want," he said. "It’s awfully coincidental that within three weeks of the work being done the property floods at the first significant rain."

But refuge officials insist that is exactly what it was: a coincidence.

He said the deluge that damaged the camp was a "huge flood event" that caused problems across the refuge 80 miles west of Las Vegas.

The area is prone to flooding, thanks to a shallow groundwater table and its position at the narrow bottom of a 370-square-mile drainage. A flood of that size probably would have washed through the Fuenteses’ property regardless of any work done on the refuge, Sanchez said.

Ash Meadows officials met with the Fuenteses in 2007, shortly after they bought the camp property, and explained the flooding risk to them, he said. Officials also warned church leaders that the federal government controlled the springs flowing across their property and probably would be diverting the water in the future, he said.

Sanchez added that the fish and wildlife service tried to buy the camp property in 2006 but was outbid by the church. As a government agency, the service is prohibited by law from buying land for more than its appraised value, he said.

Victor Fuentes said what has happened to him over the past 18 months reminds him of what he left behind when he fled his home country.

"It’s no different than the government that we have in Cuba. That is not the government I expect to find here in the United States of America," he said.

Fuentes escaped Cuba in 1991 by swimming seven miles from near his home in Santiago to the U.S. naval base at Guantanamo Bay.

He was granted political asylum and moved to Las Vegas, where he said he took up with a group of Cuban nationals who offered to help him get his ailing mother off the island if he helped them sell illegal drugs.

When the drug ring was busted less than a year later, Fuentes was locked up for three years on federal charges.

After his release from prison, he became an ordained minister. He and Annette Fuentes launched Ministerio Roca Solida in 2004.

Becker plans to file the Fuenteses’ damage claim this week. The service then will have six months to respond, he said.

The center also is considering litigation on several other fronts, including the decision to divert streams that Becker said have flowed across the camp property for well over 100 years.

"I think it’s always been Fish and Wildlife’s position that they could do whatever they want with the water, but that doesn’t mean the Fuenteses don’t have property rights," the attorney said.

This is the second case taken up by NPRI’s Center for Justice and Constitutional Litigation.

In November, the center filed a lawsuit challenging Democratic Sen. Mo Denis’ work as a computer technician with the Public Utilities Commission.

The lawsuit argued that having jobs in both the executive and legislative branches of government violates the separation of powers protections.

Denis has since resigned from his PUC job and gone to work for a private construction company in Southern Nevada.