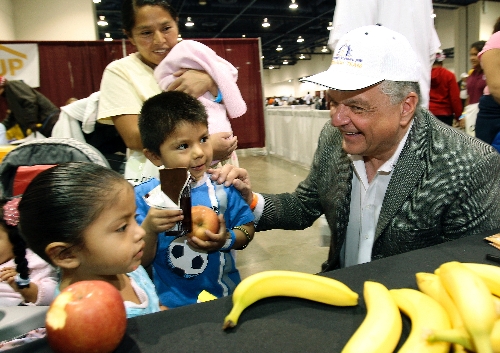 "Let’s get you a banana. You want a banana?"

Steve Sisolak asks that as he peers down at a man who brought two daughters to an annual event that aids the homeless.

Sisolak grabs some fruit and candy bars from the stand that he has volunteered to tend at Cashman Center. He smiles warmly and hands the treats to the man who is cleanly dressed in a T-shirt and jeans but has the tense squint of someone unsure of his family’s next meal.

He probably didn’t vote for Sisolak.

Chances are, he didn’t vote at all because he lacked a permanent address when Sisolak narrowly won a race for Clark County commissioner in 2008.

Those close to the wealthy commissioner say he goes about his charity work quietly because it has nothing to do with politics. No news releases. No casual mention of it in public forums.

But he is outspoken about most everything else.

After a little more than a year in office, Sisolak, 56, a former regent for the Nevada System of Higher Education, has become a spirited voice on the county board and possibly its most vigilant member.

When seated on the dais, he can be congenial and stern. He comes across like a gadfly in politician’s clothes, demanding accountability for every dollar spent and questioning policies he thinks make no sense.

And the self-described maverick is hard to pigeonhole. He has been accused of pro-union bias, yet has alienated the firefighters’ union so much that he received e-mail telling him not to expect red trucks if his house goes up in flames.

"If you look at my vote, I’m the least aligned," he says.

Sisolak thinks that too much is made of political labels. He was raised a Democrat, so he sticks with that party, even though he doesn’t fit the mold.

"Fiscally I’m a conservative, and socially I’m a liberal," he said. "I think people would agree I’m unpredictable."

His voting record bears that out.

He bashed county firefighters’ un­willingness to make what he considers a serious contract concession as the county faces an estimated $200 million shortfall. He also raised concerns over a proposal to allow them to receive bonus pay for transporting patients to the hospital under a new statute. And he slammed their cost-of-living raises, which have outpaced inflation by 32 percent in a 20-year span.

In challenging firefighters’ earnings, he said, "I’m out there by myself a little bit."

Sisolak hasn’t endeared himself to the county’s largest employees’ union either.

He dismissed the claim by the Service Employees International Union that a capital-improvement fund could be tapped for enough money to avoid layoffs. And he criticized workers’ supplemental pay — including overtime, longevity and clothing allowances — which reached $155 million last year if you include firefighters.

But Sisolak was accused of pro-union bias in 2009. He chose a union contractor that bid $4.6 million more on a Las Vegas Beltway project than a non-union shop. Then he tried to discredit the non-union company by citing violations it incurred in multiple states.

A federal judge later ordered him and County Commissioner Tom Collins to not participate in awarding the bid. The case is now tied up in federal appeals court.

Sisolak insists that union politics never influenced his decisions about the contract.

One of Sisolak’s most partisan moves stirred an uproar in Laughlin hours after he was sworn into office. He replaced three Republicans on a town advisory board with three Democrats in the hamlet that’s 94 miles south of Las Vegas.

The town needs that money to develop national parkland near the Davis Dam and draw much-needed visitors to the area’s ailing resorts and casinos, Ross said.

"As a Laughlin resident, I’m upset about how he’s treated our town. He’s clearly trying to accumulate as many political chips as possible."

But some on the left and right praise Sisolak’s scrutiny of dollars and cents, which occasionally tries the patience of fellow commissioners at meetings.

"His efforts to hold government accountable, especially the firefighters, and look closely at how tax money is being spent should be applauded," said Andy Matthews, spokesman for the Nevada Policy Research Institute, a conservative think tank based in Las Vegas.

Ross even gives grudging credit to Sisolak for standing up to firefighters, saying it’s something that no other commissioner will do.

"I like that he looks with a business-like approach at government," Rogich said. "He’s not anti-union. He’s anti-anybody who’s not trying to get fiscal sanity with our revenues."

A liberal activist lauded Sisolak for probing the $3 million in ratepayers’ subsidies that Wolfgang Puck has received for a cafe at the Springs Preserve, a 180-acre site with outdoor displays, botanical gardens and a wetland area off Alta Drive.

The Las Vegas Valley Water District has paid Wolfgang Puck an average of $1 million a year since 2007, said Launce Rake of the Progressive Leadership Alliance of Nevada.

"It takes a lot of guts to go up against the water authority," Rake said about Sisolak. "I think he’s approached the issues thoughtfully."

Five years ago, Sisolak won $23.5 million in a lawsuit against the county for height restrictions imposed on 10 acres he owned in a low-fly zone near Las Vegas Boulevard and Warm Springs Road. He claimed the height limits diminished the land’s value when he sold the parcel eight years ago, and that was an illegal taking of his property.

During the 2008 election, his opponent, Brian Scroggins, accused him of buying the commission seat.

But Sisolak said his wherewithal allows him to work as a commissioner full time.

Wealth also enables him to be more of a maverick because he doesn’t depend so much on his commission salary or campaign donations, said David Damore, a political science professor at the University of Nevada, Las Vegas.

"The plus side, he’s going to be less likely to grovel for money," Damore said.

The downside is that some will question whether he’s in touch with working families trying to survive the recession, Damore said.

He grew up in a working-class Czech family in Wauwatosa, Wis. His family wasn’t poor but struggled at times to get by. His father was a design engineer at a General Motors plant, and his mother worked full time at a convenience store while raising three children.

As the middle child, he wore hand-me-downs, but his mother always kept his clothes clean, he recalled.

In the early ’60s, when Sisolak was 10, his father was laid off for three years, straining the family budget even more.

That experience gave him a greater empathy for the impoverished, including local residents who lost their jobs and homes after the economy tanked, he said.

He credits his upbringing for teaching him the value of helping others.

"I believe in giving back," Sisolak said. "My parents taught me not only the joy of giving, but the responsibility of giving."

His blue-collar background left a permanent mark. An MBA, a quarter-century running a direct-marketing business and 10 years as a regent couldn’t erase it.

Sisolak also is a devout Catholic who goes to Mass every day. He said his faith keeps him grounded.

"It’s more for selfish reasons," he said. "It’s a quiet time to reflect. It helps me get through life. You leave it a little better than you got it."

But he’s quick to add that he’s not a saint. He let religion fade from his life for several years and then regained it after he flirted with death.

A 1979 snowstorm knocked out power while doctors were operating on his appendix. He learned later that he almost died on the table.

Sisolak said he loves being a commissioner because he can serve the public, partly by resolving conflicts that affect people.

He would like to stay in office for the three terms allowed by law, and beyond that he has no idea what he’ll do.

Sisolak married in the late ’80s and had two daughters with the wife he later divorced. His daughters both attend UNLV.

Their pairing raised concerns during Boutin’s council race because Sisolak’s district overlapped with Henderson, leading critics to question whether there was a potential conflict of interest. The controversy fizzled after Boutin was elected.

Boutin said he gave her a "promise ring" that makes them unofficially engaged. They plan to marry eventually, she said.

At the homeless charity event, Boutin smiles as she shares light-hearted details about Sisolak. For instance, he walks on a treadmill every morning. That’s a good thing, she says, because he keeps bowls of candy in his office to appease a hard-core sweet tooth.

Her face turns earnest as she talks of how he encountered a teenage boy at a storage shed. The teen owned little more than the clothes he was wearing.

Sisolak paid for his training as an emergency medical technician. The young man is pursuing a paramedic’s license with the goal of becoming a firefighter in Texas.

"He’s always thinking about the feelings of the underdog," she says.

Melissa Goodwin, 24, says she met Sisolak at the homeless youth agency. He paid for some of her college classes, says Goodwin, who is majoring in social work.

"I really don’t know if I could’ve done it without his help," Goodwin says.

Standing at the charity booth, Sisolak says he learned two things during his year in office.

First, he must always think about how his decisions will affect workers. Also, it takes a while to make an impact because government is slow and tedious.

A moment later, a Hispanic man approaches with three young children. Sisolak kneels to the floor and gives fruit and candy to the kids, a gesture that has an immediate impact.

They smile and thank him.