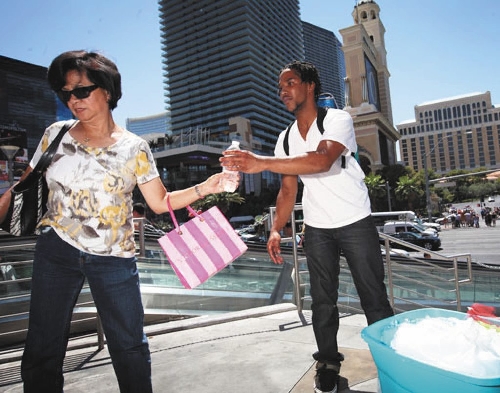 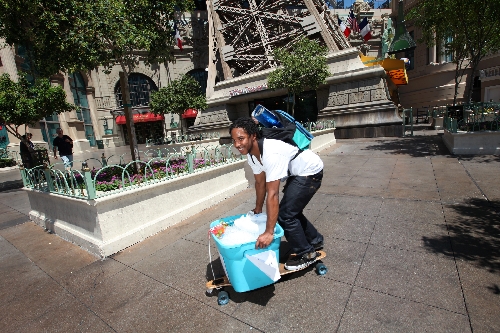 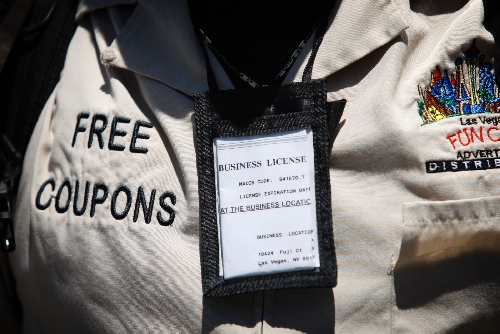 The man anxiously spies over the side of a pedestrian footbridge near Bally’s, searching for police officers patrolling the Strip on a blistering summer day.

He is a lookout for unlawful vendors selling bottles of water to hot and thirsty tourists. His cellphone rings constantly as his fellow street peddlers call for status updates on where police officers are. This time, it’s his jumpy business associate worried about police busting a nearby vendor.

He won’t give his name as he chats about his eight-year stint selling water bottles on Las Vegas Boulevard South and how he has been arrested three times in that period for doing business without a license. He said he can’t get a business license because Clark County government doesn’t view his operation as legitimate.

"We’re not selling drugs or ripping people off," the man said. "I do it for a living to get food for the family."

In an attempt to crack down on these types of illegal business practices on the Strip, county commissioners on Tuesday made it a misdemeanor for people to stand on sidewalks and sell bottled water, T-shirts and other items to passers-by. The punishment could be a $1,000 fine and up to six months in jail, versus a ticket and a small fine now.

But some street vendors say they’re not going away just because of a new ordinance. Others say it won’t do enough to curb violence among peddlers who use their fists to battle for turf where there are more customers. And, as with any new law, there could be unintended consequences from enforcing it.

The countywide law goes into effect in about two weeks after police have had a chance to warn and educate people about the change.

The ordinances won’t affect handbillers who distribute fliers for adult entertainment and escort services, people who earn tips by dressing in costumes and posing for photos with tourists or street performers.

"You’re not allowed to sell anywhere in the county or the city without a business license; it is not permitted," Commissioner Chris Giunchigliani said. "This will help folks not get citations and help our (officers) not be arbitrarily perceived as singling anybody out. We have to protect our public right of way."

The ordinance came from a set of recommendations made by the Resort Corridor Workgroup, which proposed Strip improvements at the commission’s request. The goal is to "clean up the Strip" and make it a more inviting place for tourists.

The recommendations have included enforcing a curfew for animals and an ongoing $581,000 pedestrian study to identify areas where pedestrian movement is congested on the world-famous stretch of real estate between Russell Road and Sahara Avenue. Funding for that study comes from room tax proceeds restricted for transportation improvements in the resort corridor.

The public right-of-way change, targeted at vendors, is the second ordinance to come from those discussions.

Some street vendors say the law won’t stop them from continuing to sell items illegally and will affect only the livelihood of people trying to make a modest living.

A casino security guard warned a few people Monday that they’re breaking the law by selling water out of a cooler in front of Planet Hollywood.

Part of that group, Delores Smith, 20, acknowledges that the water she and her cousins are selling for $1 is unfair to licensed businesses that overcharge. But she also said they’re providing what could be a lifesaving public service.

"We’ve seen people pass out from the heat and drinking too much," Smith said. "If we couldn’t do this, we’d go stand by our house in the street and do the same thing. We’re just trying to make a little extra money."

The group warns tourists of dehydration as they haul coolers on a skateboard. Smith said they plan to get a business license if they sell enough water.

Metropolitan Police Department Capt. Todd Fasulo, whose Convention Center Area Command includes the Strip, said enforcement won’t be an issue. Police will respond when called, and officers will address vendors as they see them. Most of the focus will be on the Strip, though the ordinance is countywide.

"If they think a lookout will help, that will only help with a uniform cop," Fasulo said. "It won’t do anything for the security guard with a camera or a plainclothes cop."

Fasulo said he has received some complaints of vendors pursuing business too aggressively, stopping people in their tracks.

"We want to create an atmosphere of safety up on the Strip. We don’t want people to think they’ll be harassed or haggled."

The ordinance isn’t expected to stop the violence, though, as turf battles happen over which areas, such as Planet Hollywood, Bally’s and the Bellagio, are more lucrative.

On the other end of the Strip, the lookout said he will find a creative way to continue his business.

"I’ll figure it out," the man said. "It’s going to stop some people who don’t want to go to jail or be deported."

The man – who is from Mexico, is living on a visa in the United States and working to become a citizen – has a work permit pending. He said he has known people, many from Mexico, who have been deported after being arrested for selling water.

Virginia Kice, a U.S. Immigration and Customs Enforcement spokeswoman, said generally speaking, anyone booked by local law enforcement has fingerprints matched against federal databases that can screen for criminal history and determine whether a person has been previously deported.

"We’re not engaged in enforcement of local code," Kice said. "If someone is convicted of a crime, that could be an underlying basis for deportation."

James, another Strip vendor who refused to give his last name, works for Sightseeing Tours Unlimited, a licensed tour business. He said illegal street vendors are unfair to businesses that pay for overhead such as licenses, rent and employee costs. He will face police scrutiny, though, as it is illegal for anyone, licensed or not, to operate in the public right-of-way.

He added he has seen peddlers resort to violence in the push for more customers – even breaking his friend’s jaw.