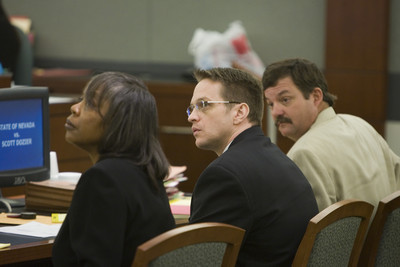 Years spent working in the trash business prompted Edward Miller, the maintenance man at the Copper Sands, to peek inside the trash bin on the south end of the apartment complex.

“You get in the habit, you always look in Dumpsters,” he said.

When he noticed a suitcase taking up an inordinate amount of space April 25, 2002, Miller said he tried to move it, but it was too heavy and he called for a colleague to help.

“I unzipped it till I saw that bloody towel. Then I said, ‘We’d better call Metro,'” Miller said.

What the Clark County coroner discovered inside launched an investigation that solved a missing person’s report for 22-year-old Jeremiah Miller, of Phoenix, and an additional homicide in Arizona.

“This is not a movie. It seems as though it could not be possible, but it is,” prosecutor Giancarlo Pesci said during opening statements to a jury Friday in District Judge Jennifer Togliatti’s courtroom.

Prosecutors will try to prove to jurors over the next few weeks that Scott Dozier, who is facing the death penalty, lured Miller to Las Vegas on April 18, 2002, with the promise of providing a dealer from whom Miller could purchase Ephedrine, an ingredient used to make methamphetamine.

This was Miller’s second trip to Las Vegas that month, after the first attempt to purchase the substance failed.

Las Vegas police said Dozier shot Miller, who had borrowed $12,000 from a 60-year-old Arizona drug dealer to buy the Ephedrine, in the head and robbed him at the La Concha hotel.

He then bled him out in a bathtub and systematically cut him into pieces to avoid anyone identifying him, police said.

Authorities are still missing Miller’s head, arms, calves and feet, but Pesci surmised the head might have been placed in a bucket of concrete that Dozier had asked for from a fellow maintenance worker at the hotel.

Dozier used to do maintenance at the hotel and was staying there for free with Miller.

“This case and aspects of it are almost surreal,” defense attorney Alzora Jackson said.

She and Deputy Special Public Defender Clark Patrick will try to prove that Dozier, 36, was not the killer. They indicated to the jury that the “gangster” who gave Miller the $12,000 and who has never been found might be responsible for the gruesome death.

A key piece of evidence Jackson touted was Southwest Airline records that show Dozier was at the airport waiting for a flight back to Arizona the evening of April 24, at the time the suitcase was likely put into the apartment complex’s trash bin.

Edward Miller said he looked into the bin before leaving work that day around 4 p.m. and it was not there.

A resident of the complex told police she heard the sound of something heavy bang against the bin between 10:30 p.m. and midnight, while Dozier was at the airport.

Jackson also said a friend of Miller’s will testify he saw Miller and his girlfriend, Brandy Douglas, cooking methamphetamine and making a mess of it after they returned from their first trip to Las Vegas, suggesting Miller could have successfully purchased the Ephedrine after the first trip and was unable to sell the finished product.

Jackson also noted a number of the witnesses expected to testify were on meth at the time, including Douglas, whose dates of her and Miller’s first trip to Vegas do not match the airline records.

After police found the suitcase, which included the waist-to-knees and torso sections of Miller, including two shoulder tattoos which police used to identify him, they were able to match him to the missing person’s report his parents filed on April 20, 2002.

Pesci said Dozier’s’ friends began coming forward with information, including one who told police he saw a body holding its own head in Dozier’s hotel bathroom at the La Concha. According to the police report, Gary Powell, who was incarcerated at the time, also provided information. Powell took Las Vegas police to Carefree, Ariz., to the middle of the desert, where investigators dug and found the dismembered body of 26-year-old Jasen Greene.

Powell said he had helped Dozier bury Greene in 2001, after Dozier killed him because Greene had threatened to expose Dozier’s drug operations.

Dozier was convicted of second-degree murder in Arizona and sentenced to 22 years in prison in 2005, before he was brought to Nevada to face murder charges in Miller’s death.