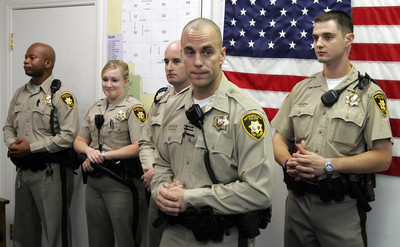 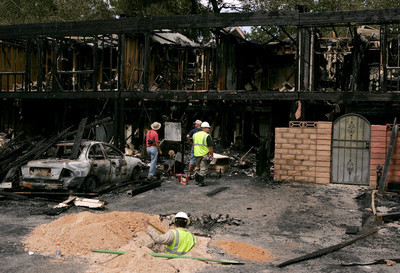 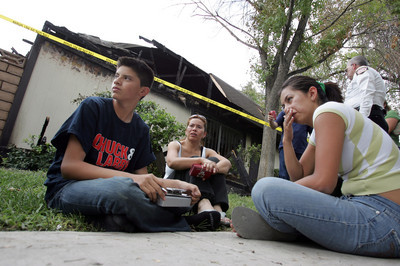 Jackson and officer Jesse Hiddema, who also is in training, were the first to respond to a two-alarm fire Thursday that destroyed six units at Meadow View Apartments, near Spring Mountain Road and Jones Boulevard, and left at least 16 people homeless.

Moving to the back of the complex, Jackson saw Mary Morris, who is in her 70s, trying to put flames out with a garden hose. Her significant other was asleep inside.

"She was standing there fighting the fire for him," Jackson said. "I figured I might as well stand by her."

Jackson told Morris to get out of the apartment as he entered to search for the man, who is in his 80s.

Jackson found him in an upstairs bedroom, hoisted him over his back and rushed downstairs only to find the apartment’s back door, which he had entered, engulfed in flames.

With the man still on his back, Jackson began kicking and pounding at the apartment’s front door, a steel security door. Concerned that the ceiling was going to give, Jackson wasn’t sure if they would make it out.

Morris, who had gone inside when Jackson went upstairs, found a key, and they were able to exit the front door, the man still on Jackson’s back.

Within two or three minutes of their getting out, "every single unit was completely engulfed in flames," Hiddema said.

Jackson, who graduated from the police academy in April, said he worked off instinct as he responded to the flames.

"All you think is, ‘There’s a problem; I have to help solve it,’" he said. "That’s what we get paid to do. I honestly don’t think of myself as a hero."

The Clark County Fire Department was summoned to the apartment building at 6182 Meadow View Lane around 12:14 a.m.

"When crews arrived … it was burning from one end to the next," said spokesman Scott Allison.

Three gas mains broke and were shooting flames into the air, Allison said.

The fire spread easily from one unit to the next because of the building’s common attic space and wooden walls, he said.

The cause of the fire, which left $1 million in damage, was unknown Thursday.

Melted plastic chairs and a soot-covered child’s bicycle stood Thursday in the yard behind the charred building.

Kris Darnall, spokeswoman for the Southern Nevada Chapter of the American Red Cross, said the agency has helped find temporary housing for seven adults and four children who lived in the apartments.

Resident Norman Lavin was one of them. He said his two daughters, Shelby, 10, and Rachel, 5, had awoken him. He grabbed his daughters and got out of the burning building, leaving their dog behind.

"They saved my life, and then I saved theirs," Lavin said of his daughters. "I sleep like a log. The only thing I hear ever is kids’ screaming. I wouldn’t have woken up if it wasn’t for them"

Lavin’s wife, Marlene, raced home from work after hearing of the fire.

"I couldn’t believe it was happening," she said. "This is the kind of thing that happens to other people. This is the type of thing you see on the news."

Nelson Villalta, 12, warned his family of the fire after seeing his alarmed dog at the patio window. At first, his mother, Elba, didn’t believe him. Then she looked outside.

"The flames from my neighbor’s patio were coming into mine," she said. "I couldn’t see my patio at all, the smoke was so thick. I was scared. I didn’t believe it was happening."

Eight to 10 Las Vegas police officers joined firefighters at the scene. Officer Jose Montoya, a spokesman for Las Vegas police, said Jackson wasn’t the only officer to save a life.

The children, 8 and 7 years old, were left at home without supervision.

Walker, the father of three boys, said he saw a child’s head in the window and knew he had to go inside the burning building.

"They (the children) were the first thing on my mind," he said.

He found them in an upstairs closet. He thinks the children got scared and hid when officers banged on the door.

Las Vegas police’s abuse and neglect unit is investigating why the children were left home alone. The unit will turn the results of the investigation over to Child Protective Services, Montoya said.