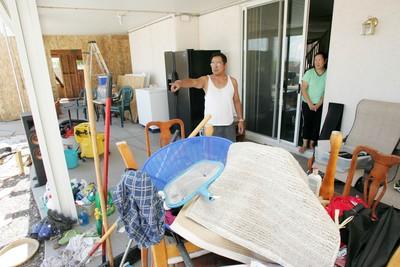 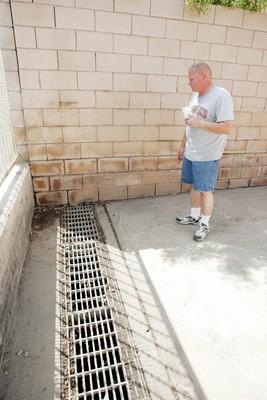 Benjamin Lublin and several of his neighbors took the day off Tuesday. But it wasn’t for a holiday, and there definitely wasn’t a block party.

In fact it was the opposite of a block party. Lublin and more than a dozen fellow residents of the Monaco Isle development, near Desert Inn and Cimarron roads, had spent the last 24 hours trying to clean up after Monday’s storms flooded their neighborhood.

Residents said clogged storm drains and the neighborhood’s outer wall caused rainfall to accumulate and sent nearly a foot of water into more than a dozen homes Monday morning.

“I just don’t know where to start,” Lynn Olschlager said with a sigh of exasperation.

The 6 to 8 inches of water that filled the bottom floor of her two-story home at 8237 Lancia Ave. ruined her living room, family room and kitchen, she said.

The Olschlagers and many neighbors think the county and KB Homes, builder of the community, should take some responsibility for the damage.

A KB Homes spokeswoman wouldn’t comment on the impact the wall might have had on the flooding.

Many residents feel the county, which is responsible for the maintenance of the storm drain system, didn’t do enough to keep the drains clear.

“This is not an act of God,” Lynn Olschlager said. “If the drainage would have been maintained properly, this never would have happened.”

The six-inch drain and standard one-foot-wide storm drain in the area have been working properly for four years, he said. It was the heavy rainfall that caused the streets to fill with water, Shelton said.

“People are not understanding that they had more than two inches of rainfall in a very short period of time; that is more water than what the flood facility was designed for,” he said.

The drains in the neighborhood are designed for a maximum of 2.77 inches of rainfall over a six-hour period, Shelton said. Two to three inches of rain fell in three hours or less Monday morning, he said.

Gale Fraser, general manager of the Regional Flood Control District, said Monday’s storm was one of the worst he has seen in his 20-year career. The nearby Lakes Detention Basin at Desert Breeze Park had 3.31 inches of rain. Two inches fell in 30 minutes, he said.

The neighborhood drains were clogged, mostly by garbage cans and bags left out Sunday night for pickup on Monday, said Shelton.

But Jim Olschlager said the garbage was floating in the street, not blocking the drain.

Shelton didn’t know when the flooded neighborhood’s drains were last cleaned by county crews. The county has thousands of mile of roadways to maintain, he said.

Public Works officials hadn’t received any calls about problems in that area since 2000, Shelton said.

“People need to understand these things are only designed to handle so much water at a time. There wasn’t anything for us to learn from, people just need to learn to keep debris off the streets.”

Gutting their homes wasn’t the only thing on residents’ minds as they recouped from Monday’s storm. Most residents don’t have flood insurance, because their neighborhood isn’t in a federally designated flood zone.

Insurance will, however, cover the damages to Jim Olschlager’s 2003 Mustang Mach 1.

Dani Denton, spokeswoman for the Nevada Insurance Council, said just because you don’t live in a flood zone doesn’t mean you don’t need to be insured. “Flood insurance can be expensive, but not having it can cost more,” she said.

“One of things consumers don’t realize is that flood maps change and developments can alter whether or not a piece of particular property is or is not a flood zone.”

All flood insurance is offered through FEMA’s National Flood Insurance Program, said Denton. The only way flood insurance can be purchased is through private companies who underwrite coverage for the government.

Flood insurance is available to anyone who lives in a county that participates in the National Flood Insurance Program, which Clark County does, she said.

Lublin, who doesn’t have flood insurance, said he still doesn’t know if his insurance will cover any of the damage to his home, which he estimated at $50,000.

He said many neighbors are in the same boat. After the flooding Monday, people came pouring out of their houses, he said. Everyone was looking around, and no one had any idea what to do. They figured they’d call their insurance companies and start from there.

“The water went away but we still need help,” said Lublin. “How does this happen to people? We pay our taxes, we go to our jobs, and our houses are destroyed and no one is helping us.”