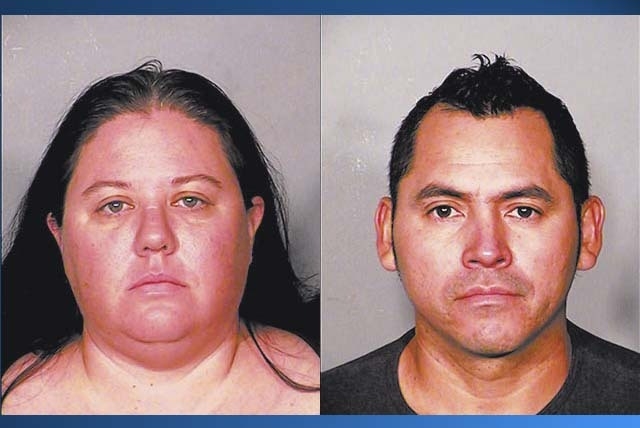 On Sept. 23, two Clark County Department of Family Services employees traveled down a gravel road in Sandy Valley and parked along a fence near a travel trailer on a two-acre dirt lot.

Twenty minutes after the foster parent licensing staff members honked the horn, Andrea Hernandez, a licensed foster parent since 2008, emerged from the trailer, according to a Las Vegas police report.

She had two foster children in her care — a 2-month-old boy and a 17-month-old boy — and was angry with the Family Services employees, who were there because the children were being kept at an unapproved location in the remote desert community 50 miles southwest of Las Vegas, according to the report.

“You can just take the kids,” said Hernandez, according to the report. After Family Services’ staff secured the children in their vehicle, Hernandez said: “I hope you can sleep well tonight.”

Both children showed signs of neglect, not all of it recent. The 17-month-old boy had burn scars; the younger one had a widespread, severe skin infection.

Hernandez, 38, and her husband, Waldo O. Hernandez, 40, are no longer foster parents and face criminal charges of child abuse, neglect or endangerment in connection with the case. They declined a request to be interviewed while jailed at the Clark County Detention Center.

The Department of Family Services says its policy on monitoring children in foster care was followed, and it handled the case correctly.

“In fact it was the DFS licensing staff that discovered the injuries, removed the children, and got the police investigation started,” Kristi Jourdan, Family Services spokeswoman, wrote in an email.

But the slow response described in police reports raises questions about the department’s actions.

The Department of Family Services reclaimed the children almost three weeks after receiving its first report alleging neglect, according to the police report, which is based on statements from county employees who handled the case. And it’s unclear why problems went unnoticed by Family Services workers who reportedly saw the older boy weeks earlier, and who might have acted much sooner to protect him.

How things happened in this case raises red flags, said Donna Coleman, a longtime child advocate and co-founder of the Children’s Advocacy Alliance.

“It could have been a lot worse, and it has been a lot of times,” Coleman said. “If they had a neglect report and they’re not able to get a hold of (the foster parents), they needed to move on that and figure it out ASAP.”

On Sept. 19, Family Services licensing staffer Anita Moody was trying to locate the children and their foster parents at their Las Vegas address on file with the agency.

Moody later told police she was assigned to investigate an “allegation of neglect” involving the children, which had been reported to Child Protective Services on Sept. 4 and again on Sept. 17.

Unable to make contact, she put her business card in the door and left.

That was 15 days after the first neglect report and four days before the children were located.

In a statement, the Department of Family Services spokeswoman disputed the Metropolitan Police Department’s description of Moody’s assignment.

“The employees were not assigned to investigate an allegation of abuse or neglect,” Jourdan said when asked about the response time. “Rather, they were assigned to respond to a licensing issue.”

She added: “The department has many different units, and law enforcement and others do not always understand the nuances of the work that is done by DFS. At times, language in police reports is used interchangeably, and often workers are inaccurately referred to as one and the same. I understand how this could confuse someone reading this report, in particular.”

Jourdan, communicating by email, didn’t identify the licensing issue. A county employee told the Review-Journal that it involved a reported rash on one of the children.

The Metropolitan Police Department was unavailable for comment late Friday afternoon, after Jourdan responded to questions from the newspaper. The police report in question was written by an abuse and neglect specialist who is a seven-year department veteran.

“In short, in this case the information received on September 4 and September 17 did not rise to the level of an abuse or neglect report,” Jourdan said. “The issues were assigned to licensing staff, not CPS staff. And, licensing staff followed its standard practice of making outreach to caregivers to ensure licensing standards are met and children are receiving quality care.”

Yet county policy requires permanency case managers for foster children to immediately call the county’s child abuse and neglect hotline to report allegations involving children under their professional watch. They must follow up by the next day and respond along with Child Protective Services, which is part of Family Services.

The hotline has three levels for coding calls, depending on the severity of the report. Those levels require a response within three hours, 24 hours or 72 hours. But those response requirements didn’t apply in this case, Jourdan said. She said no calls were placed to the hotline on Sept. 4 or on Sept. 17.

The children weren’t picked up by Family Services for another four days after Moody’s attempt to find them in Las Vegas. Their removal came after Andrea Hernandez emailed Family Services to say her phones were being turned off, and that she would be in Sandy Valley for four days and could only be contacted by email, according to the police report.

Family Services tracked down the Sandy Valley address by contacting the Clark County School District, where the Hernandez’s biological son was enrolled.

The police report doesn’t say when the two boys were placed with the Hernandez family, but it recounts injuries in the first week of June, when the foster provider’s 13-year-old son tried to change the older foster child’s diaper while at the Sandy Valley property.

Lacking a clean diaper, the boy tried to substitute a plastic bag and used a black mini-fridge left out in the sun as a changing table, according a statement in the police report. The hot metal of the appliance burned the undressed toddler.

Waldo Hernandez, who was a cook at Mandalay Bay, told police he arrived in Sandy Valley after work and found the baby had been injured. The Hernandezes tried to treat the burns on their own, using peroxide, Neosporin and a bandage.

Hernandez told police the burns weren’t blistered and he applied cream from a first aid kit. He admitted it was a mistake not to take the baby to a doctor, saying, “which, you know what I mean, is required.”

A doctor who assisted police said treating the child’s burns with peroxide would have caused “horrific amounts of pain,” given the large area of exposed nerve endings, officers wrote in their report. The burns were second-degree, possibly even third-degree, according to the doctor’s assessment.

The doctor also reported finding a 3-inch burn scar on the boy’s inner arm between his wrist and elbow, and a large scar on his buttocks. He had a rash on his abdomen and had missed vaccinations.

The medical exam of the 2-month-old, recounted in the police report, found a severe rash with skin breakdown and infections in every skin fold, including his neck, armpits and legs.

Yet more than two months lapsed between the toddler’s burn injury and the boy’s removal from the Sandy Valley trailer.

Bill Grimm, a senior attorney with the California-based National Center for Youth Law, said younger children are among the most vulnerable and merit a thorough response when there are allegations of neglect.

Given their age and the fact the parents couldn’t be found immediately, the agency shouldn’t have taken so much time to address the allegations, said Grimm, also an attorney in a class action lawsuit against the county involving foster child welfare.

The county wouldn’t say if any county employees were disciplined in connection with the case, saying personnel matters are confidential.

Review-Journal writer Yesenia Amaro contributed to this report. Reporter Ben Botkin can be reached at 702-387-2904, or bbotkin@reviewjournal.com. Follow him on Twitter @BenBotkin1.