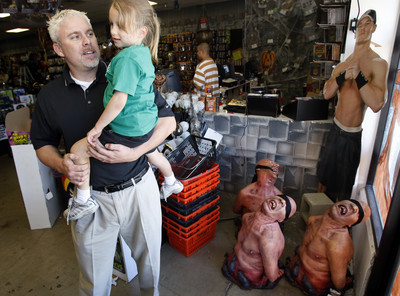 “You just feel less and less safe every year. There are fewer people turning on their porch lights, fewer people trick-or-treating,” said Floyd, who Wednesday night will be taking his 5-year-old daughter, Savannah, to a school party or other closely supervised event.

“You never know who lives on the next block,” he said last week as he shopped for a fairy princess costume for Savannah.

Law enforcement agencies know parents fear that their children could encounter dangerous people on Halloween, when the time-honored warnings about not talking to strangers and never taking candy from them are set aside. They encourage parents to use online tracking systems to determine whose doorbells their children will be allowed to ring.

Meanwhile, parole and probation officers will be ringing the doorbells of registered sex offenders on Halloween as part of the Nevada Department of Public Safety’s Parole and Probation Division’s third annual “Operation Scarecrow.” The operation is aimed at preventing high-level sex offenders from using Halloween as a way to have contact with children.

The division has set forth specific Halloween rules for Tier 2 and Tier 3 sex offenders under their watch. The offenders are prohibited from answering their doors to trick-or-treaters. They can’t be at a home where candy is being handed out, and they can’t attend any festivities where children are present, even if they have permission from a judge or the parole board to do so.

They are even banned from transporting or accompanying their own children to any Halloween event or trick-or-treat activity.

The rules are for everyone’s benefit, said Lt. Adam Page with the Nevada Department of Public Safety. They keep children out of harm’s way and sex offenders from being in a situation where they might regress.

The American Civil Liberties Union of Nevada, however, sees the Halloween rules as another example of how sex offenders have been turned into the witches of the 21st century.

The Nevada ACLU is questioning parole and probation’s authority to impose its Halloween rules, which civil rights advocates say violate not only the rights of the sex offenders but also affect the lives of their children.

If the court or parole board has given a sex offender permission to be around or transport their own children, “we don’t think they (parole and probation officers) should be interfering with those established orders,” said staff attorney Maggie McLetchie.

There is no legitimate reason why sex offenders shouldn’t be able to have a backyard barbecue or Halloween party with their own children, she said.

Under the rules, a supervised sex offender can’t even be “locked up in a room upstairs while a kid is downstairs handing out the candy,” McLetchie said.

“While we understand the need to put reasonable restrictions on sex offenders, we think it should be done in a rational way,” she said.

The Halloween rules don’t specifically target child molesters. They are applied to all Tier 2 and Tier 3 registered sex offenders under parole and probation’s supervision.

Tier 2 offenders usually have one child molestation or sexual assault offense and a minimal criminal history for related crimes.

Tier 3 sex offenders usually have either been convicted of multiple sexual crimes or are likely to offend again, Page said.

Page estimates that half of the sex offenders the division supervises were convicted of crimes against children.

The law that allows parole and probation to put the Halloween rules in place does not differentiate between crimes against children or crimes against adults.

The Parole and Probation Division would have liked stricter laws. The division initially tried to prohibit sex offenders from decorating their homes for Halloween.

But, he added, “we realized we don’t have any real legal authority to prohibit that.”

That realization set in after the ACLU of Nevada sent a letter of complaint to Nevada’s attorney general.

As for the rest of the rules, however, deputy attorney general Binu Palal said parole and probation is acting within its legal authority.

A clause in Nevada law states that supervised sex offenders must not “have contact with a person less than 18 years of age in a secluded environment unless another adult … is present and permission has been obtained from the parole and probation officer.”

Parole and probation has simply chosen to impose a blanket denial of that permission for Halloween night, Palal said.

Tier 2 and Tier 3 offenders pose the greatest risk of recidivism and the greatest threat to public safety, Page said.

“There are laws keeping sex offenders away from children, but when the children come to them it doesn’t benefit their treatment,” Page said.

“We don’t want to have children in costume come to an offender’s door and cause him to start having fantasies or inappropriate thoughts. Sex offenders are all in treatment, and we try to make their terms of supervision as strict as possible in order to make sure their treatment is as successful as possible,” Page said.

Sex offenders will often use the same communication techniques with their parole and probation officers that they use to lure their victims into unsafe situations, he said.

“They show they are compliant and then they fall off our radar. We can’t have this happen.”

As of Sept. 21, some 700 sex offenders, 30 labeled Tier 3, were under the supervision of parole and probation in Southern Nevada. Once released from prison, sex offenders deserve the right to get on with their lives, McLetchie said.

Bill, a Tier 3 sex offender who didn’t want to give his last name, agrees. He pleaded guilty to attempted lewdness with a minor in 2001 on the advice of his lawyer. He claims his ex-wife made false allegations during a custody battle.

“I’m not trying to make people feel sorry for me. I just want them to understand the law is not always right,” he said. “I feel like I was wronged.”

Bill had been labeled a Tier 1 offender. After a change in the law, Bill was moved to a higher tier, which he says has made it nearly impossible for him to move on.

Bill has remarried and adopted a 21-year-old daughter and now has a 5-year-old son. He has a 14-year-old son from his previous marriage. But, he said, the law is keeping him from being the type of father he wants to be.

“I’m missing out on a lot,” he said of his 5-year-old’s plan to dress as a Transformer to trick-or-treat. “I’m missing out on my son having a great time. He wants to show me his classroom and he can’t. Both my children, they’re heartbroken. They know daddy is not the person he’s portrayed as.”

McLetchie said Bill’s situation is all too familiar. Despite a former offender completing his court-appointed programs and punishments, no matter how long he has stayed out of trouble, his life — family, job, home — “all in one swoop is thrown into utter chaos.”

“Like it or not, these people are living in society, and it is in everyone’s interest to reintegrate them safely,” she said.

The unpleasant truth is that “most sex crimes against children happen at the hands of somebody they know. It’s usually not strangers lurking in the park. It’s not the registered sex offender whose address is down the street. It’s someone close,” she said.

North Las Vegas police spokesman Sean Walker said children aren’t in more danger today. The perception might exist because there’s more information available to the community about people living nearby, and residents are taking a more active role in finding out about their neighbors.

Likewise, Page said, there have been no child abductions by sex-offenders under the supervision of parole and probation on Halloween in the last three years. Statistics for previous years weren’t available.

“As long as you are at the door with them and know where you’re at, I don’t think it’s a bad thing,” he said.