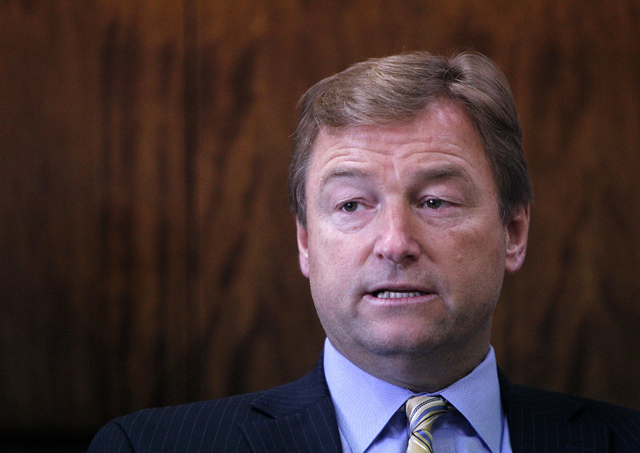 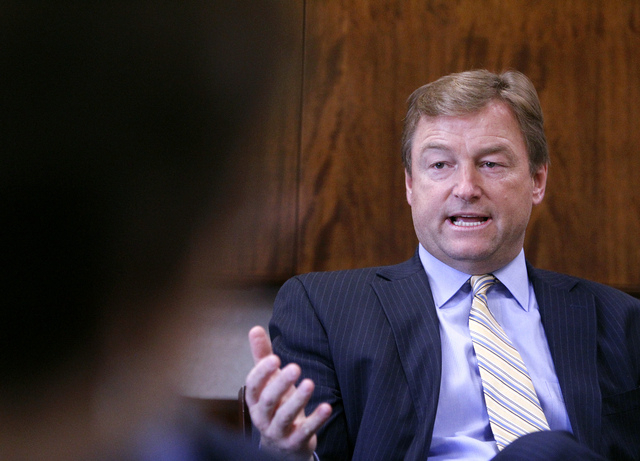 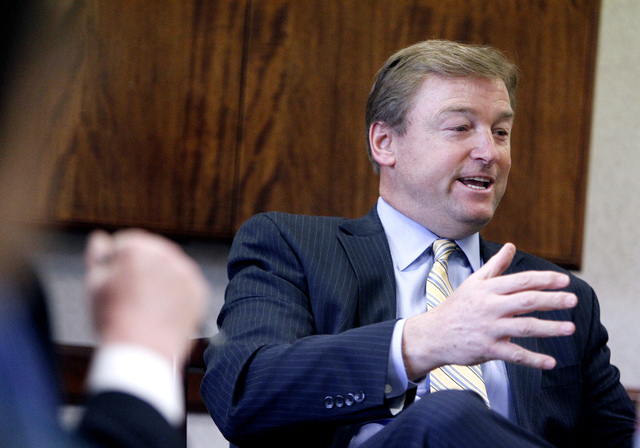 U.S. Sen. Dean Heller said Thursday he expects legislation to be introduced in the next month or so to outlaw all Internet gaming except online poker, putting a stop to what he called “the wild wild West” of gambling if every state were allowed to operate online games of chance that compete with Nevada casinos.

Heller, R-Nev., also said he believes Las Vegas Sands Corp. Chairman Sheldon Adelson, who is waging an all-out campaign to stop Internet gaming, makes some good points, including how widespread online gambling could cause social ills and how online competition could devastate the Silver State’s gaming and tourist industry.

“I think Adelson brings up some reasonable concerns,” Heller said in an interview with the Las Vegas Review-Journal editorial board. “And to have the wild wild West as an empire of gambling for the country would have some serious social implications. And I think that’s what he’s concerned with.”

Heller said he has talked to Adelson and met with the other side, or the vast majority of gaming leaders who favor unchecked Internet gambling. Steve Wynn recently joined Adelson in opposing Internet gaming, but otherwise the two giants of the industry stand alone against the American Gaming Association.

“I think the devastation for bricks and mortar (casinos) in this state … would just be a final nail, I think, in keeping these businesses healthy,” Heller said.

Asked why he thinks most gaming properties favor Internet gambling, Heller said they think they can make money.

Heller and U.S. Sen. Harry Reid, D-Nev., have been working together to come up with a bill to restore the Wire Act, which used to prohibit Internet gambling until the Obama administration several years ago loosened the law to allow Illinois to offer lottery tickets online. The two Nevada senators also want to carve out an exception for online poker.

“There is no daylight between where Senator Reid and and myself are on this particular issue,” Heller said.

Now, 16 states are considering online gambling, including California, Heller said, adding there would be no incentive for Southern and Northern Californians to visit Las Vegas or Reno if they can gamble at home.

He said a carve-out for online poker makes sense because it’s a game of skill, not chance.

“Games like poker, I think, it takes a little more skill,” he said.

Heller said he expects legislation in the next month or so. He said he and Reid are working with their Republican and Democratic colleagues to come up with a bill that could have broad support.

“We’re trying to keep it from being just a Nevada issue,” Heller said. “So Harry and I are trying to look for help from members in each of our conferences to come forward with legislation that, hopefully, long term provides a solution for us.”

Any bill could face strong opposition from powerful gaming leaders who are fighting Adelson on the issue.

“Right now there’s a majority probably around here that want nothing done,” Heller acknowledged. “You know, they want it wild wild West when it comes to Internet gambling. And I don’t think that’s good.”

Heller said he and Reid are “trying to do what’s best for the state of Nevada.”

Adelson has said he’ll spend whatever it takes to kill Internet gaming proposals on Capitol Hill and in individual states. The Coalition to Stop Internet Gambling, a grass-roots advocacy group funded by Adelson, launched in November.

Meanwhile, Caesars Entertainment Corp. and Station Casinos have invested millions of dollars in legal online wagering efforts in Nevada and New Jersey and hope to expand the businesses into other states that allow it. And the American Gaming Association has contracted with several big consulting companies to promote Internet gambling bills.

“You have members of the AGA taking one position then you have members taking a different position,” Heller said. “So it’s kind of tough trying to keep on the straight and narrow … when this is an issue that changes every day — who’s for it and who’s against it.”

Heller addressed many other hot topics during the wide-ranging interview:

— On gay marriage, he said he is still against it. “I think marriage is between a man and a woman,” he said.

— On immigration, he voted for a comprehensive reform bill in the Senate and said he believes the House is ready to approve legislation, too, although not the exact version of the Senate bill. In Reno, the day before, he said he “made some pretty bold comments,” but tempered them a bit on Thursday.,

“I do believe that if you took a comprehensive immigration reform bill — maybe not what the Senate passed, but something that’s worthy of discussion — and you brought that down to the House today, I believe it would pass,” he said. “I also believe that most, if not all, of the members of our (Nevada) delegation would vote for it in the House.”

Heller said a 40 percent increase would cost 500,000 jobs, according to the Congressional Budget Office. He added that in Nevada only 1 percent to 2 percent of those employed make minimum wage and most are teenagers in entry-level jobs.

“I think it’s wrong when the city of New York has the same minimum wage as Elko does, or for that matter Los Angeles or somewhere else,” Heller said.

— On medical marijuana, he said “as long as the public supports it, that’s fine,” but he opposes social use of pot.

— On Obamacare, he said it should be replaced and include tort reform as the best way to cut health care costs 15 percent to 20 percent. He said he would preserve provisions such as allowing young adults to stay on their parents’ insurance plans until age 26 and the ban on denying coverage based on pre-existing conditions.

Personally, Heller joined the health insurance exchange in the District of Columbia and said it would have cost him more money to keep his two sons, ages 25 and 22, on his plan because he sought a higher level of coverage. His sons each got their own plans with limited coverage to keep costs down and because they’re young and healthy, he said.

“We had to remove both of our boys on our health care plan because it was so expensive,” he said.

Heller also sped up his plans to have surgery on his right Achilles tendon, having the procedure in December before Obamacare changes kicked in because he wanted to make sure he could use the same doctor and hospital.

Heller said any GOP health care plan should include tort reform and changes to make coverage more competitive to cut costs. Now he said doctors conduct too many “defensive” tests, fearing lawsuits. His father, for example, once had to go through $6,000 worth of tests before he was diagnosed as being dehydrated, Heller said.

“I’m not saying it shouldn’t be regulated,” he said. “We do not have true competition in this country and that’s why our health care costs were going up.”

— On requiring a voter ID to cast a ballot, the former secretary of state said he’s for it.

— On the Nevada Republican Party’s plan to endorse candidates during the primary season, Heller said he doesn’t approve and if he were running for re-election this year he would not go through the process, including filling out a questionnaire. He said he would do as GOP Gov. Brian Sandoval did, saying voters can judge him based on his record.

“I don’t really agree with the endorsement process,” Heller said.

— On the Republican Party infighting and disarray in Nevada, Heller quipped, “I don’t think anybody would argue there’s room for improvement.” He said he sees Sandoval as the leader of the party, which he says accommodates all types.

“We always talk about a big tent,” Heller said. “There’s a lot of different points of view in the Republican Party today. We have conservatives. We have moderates. And we have liberals. And I think that’s healthy. I think short term maybe it’s not working for us, but in the long term it’s a good thing.”

As a result, he said GOP primaries often are very competitive while Democrats often put up one anointed candidate.

He said, however, he would do whatever Sandoval asked to help GOP candidates win election this year.

— On Sandoval’s future plans after governor, Heller said he has not talked to the him about whether he might challenge Reid for the Senate in 2016. He added he thinks Sandoval is interested in returning to the federal bench.

“Maybe going to the (U.S.) Supreme Court or back to the bench would be an option,” Heller said.

— On his relationship with Reid, he said it’s “good enough.” Reid once said he missed former U.S. Sen. John Ensign, R-Nev., who resigned in scandal, opening his seat for Heller’s initial appointment.

“I’ve talked to Harry about this,” Heller laughed. “I just throw it out as a Joe Biden moment.”