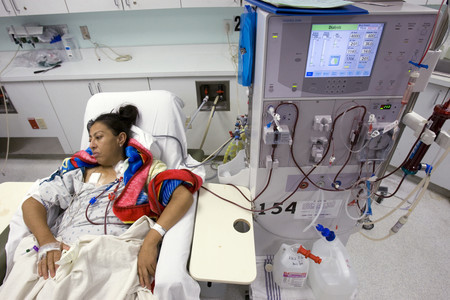 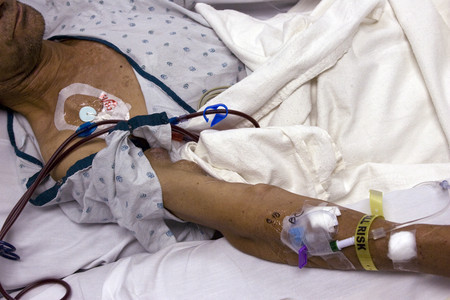 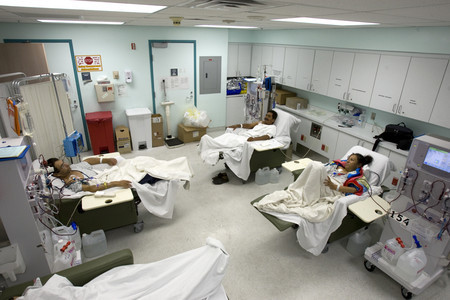 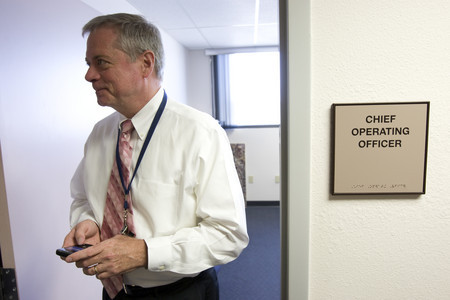 Tethered to the dialysis machine behind her reclining chair by two tubes attached to a catheter in her chest, Marta Berrera wearily stares at nothing in particular as blood flows out of, and then back into, her body.

Every four or five days, she shows up at University Medical Center’s emergency room, her failing kidneys requiring that her waste be filtered and excess fluid be removed through artificial means.

"I am so thankful to this hospital for doing this for someone who is not a citizen," she said Thursday, an interpreter translating her Spanish as she choked back tears. "Without this help, I would die and my four children would be without a mother."

Wrapped up in Berrera’s expression of gratitude is a dilemma that confounds the health care professionals at the only publicly supported hospital in Las Vegas.

"Our people are really torn," said Brian Brannman, UMC’s chief operating officer. "We want to take care of people who are ill. We’re proud that we can save lives. But our employees are also worried about the survival of UMC. They know that the appetite of taxpayers for helping undocumented immigrants is limited."

Since April, UMC has been spending about $2 million per month providing emergency dialysis services to 80 illegal immigrants, Brannman said.

He projects that these services at UMC could run more than $24 million in the current fiscal year.

In each of the five prior years, the hospital provided the same emergency services to half as many illegal immigrants for a little more than $1 million per month.

Brannman said the hospital receives no reimbursement from federal, state or local sources to provide this life-saving treatment for people who have entered the country illegally.

But under federal law, any patient who shows up at an emergency department requesting an examination or treatment for a medical condition must be given an appropriate medical screening to determine whether there is an emergency. If there is, treatment must be provided.

"When we’re projecting a budget deficit of $70 million for fiscal year 2010, you can see that $24 million in dialysis treatment that’s not reimbursed is an awfully big chunk," Brannman said.

UMC health care professionals say discussion of how to reform the nation’s health care system must include how to shore up taxpayer-supported hospitals, strained to the breaking point by following the law to care for those who are breaking it.

Health care costs for illegal immigrants, a hot-button issue in the current debate, vary widely because of the difficulty in obtaining accurate information on illegal immigrants. But all estimates run into the billions of dollars.

UMC staffers contend more efforts also must be made to persuade foreign nationals to head home for care.

And, they say, unless there is meaningful immigration reform, taxpayers can expect to pay more to wait longer for their own emergency services.

Carrison said the four dialysis chairs on the fifth floor of UMC were designed for hospital patients who suddenly become ill, and not for those in need of chronic care.

Illegal immigrants are not eligible for Medicare, however.

As a result, patients who have neither insurance nor Medicare to pay for dialysis are almost exclusively illegal immigrants, a distinction that allows hospital officials to estimate costs for their care.

"What they figured out is that if they come to emergency rooms, we’ll dialyze them if they’re in bad enough shape," Carrison said of illegal immigrants.

Using emergency rooms this way is costly and dangerous, he said, adding that a full screening with lab tests is done each time an individual comes to the emergency room.

"Unless it’s a real emergency, we don’t do dialysis on them, so their body is in bad shape," Carrison said.

Brannman said it isn’t unusual for an illegal immigrant to wait for eight hours for treatment, only to be told their condition isn’t bad enough for treatment that day.

"Then they’ll come back a day or two later really sick," he said.

Carrison said dialysis patients covered by Medicare have their own doctors who are aware of their conditions, so expensive tests need not be done repeatedly.

The high costs reflect these tests and that the patients’ health might have worsened to the point that they need more than just dialysis to stabilize their condition.

The June issue of the American Journal of Kidney Diseases reported on a Texas study that found that the cost of dialysis care was 3.7 times greater when done through the emergency room than through the usual doctor-guided treatment program at a dialysis center.

"The federal government kicked the can down the road on the immigration issue and gave the bill to us," Brannman said. "This is a federal policy failure that is driving huge health care costs to our citizens."

The contract was terminated because of a budget shortfall, and the $2 million was shifted to other services, including upgrading the hospital’s neonatal unit.

"We had to make some hard choices, and we didn’t think the county should be renewing a contract to help a small number of undocumented, anyway," Brannman said. "We didn’t think we should be in the business of making contracts for illegal immigrants. And you also have to remember these undocumented people don’t have to just come to UMC for emergency dialysis care. Remember under federal law, any emergency department has to take them."

Attempts Friday to find out what other hospitals in the Las Vegas Valley handle emergency dialysis for illegal immigrants were unsuccessful.

Carrison said he has found illegal immigrants discharged from other hospitals who were told to come to UMC for their emergency dialysis care.

Brannman said a UMC social worker told him that one of the illegal immigrants reported that at another hospital he was threatened with being turned over to immigration authorities if he didn’t go to UMC for treatment.

Repeated attempts to get Medicaid payments from the state to pay for emergency dialysis for illegal immigrants have been unsuccessful, Brannman said.

Yet Ben Kieckhefer, a spokesman for the state Department of Health and Human Services, said Friday the state will pay for "true emergencies."

"It appears that it comes down to what the definition of an emergency is," Brannman said. "Our doctors obviously believe that these people would die without dialysis."

Brannman said he has also asked for help from Mexican authorities.

Mariano Leuma Gas, the consul for Mexico in Las Vegas, said he has been working with UMC to try to send some illegal immigrants back to their home country for care.

Brannman said Gas has helped UMC on other health care issues, finding funding to send Mexican patients from Las Vegas to Mexican hospitals. But he said they have been unsuccessful in persuading dialysis patients to go home for care.

"You have to remember that I can’t make them go back, but families often want them to," Gas said. "The problem is the economy is so bad in Mexico now, too, and there often is a long wait for dialysis. But I think we can work out this problem. We need to talk more."

All three individuals in the UMC dialysis section interviewed Thursday admitted they were without insurance and in the country illegally.

The 34-year-old Barrera, who came to the United States 16 years ago, said she has been receiving dialysis treatment through UMC since December 2007.

Her condition worsened so dramatically recently that she had to spend a costly eight days in the hospital.

Another patient in the dialysis room Thursday, 47-year-old Felipe De Arcos Rodriguez, said he once had to be hospitalized for two months when he waited too long to get dialysis.

The cost of care over that period would be at least in the tens of thousands of dollars, with the final cost dependent on the lifesaving measures that had to be undertaken.

Rodriguez said he has been receiving dialysis for six years and seven months. His arms are full of bumps where tubes were inserted for the procedures and scar tissues formed.

Because he is not an American citizen, he is not eligible for a transplant.

"I’ve been in a coma four times and UMC saved me," the Mexican immigrant said. "I am very grateful to UMC. It is a great place. I try to pay the hospital $50 a month."

Emergency dialysis patient Ricardo Valladares, who came to the United States from El Salvador, said the fact that UMC gives treatment to non-citizens shows that the hospital has a big heart.

"They are special people," he said.

Berrera prays that UMC will never stop giving dialysis help to everybody.

"My husband is in jail now," she said, stressing that other family members were watching her children while she was in the hospital.

"I need to keep fighting to get better. With God and UMC, I will. And then I will be able to help my children."