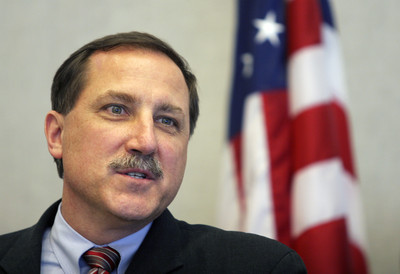 Officers stationed in Nevada by the Bureau of Alcohol, Tobacco, Firearms and Explosives refer suspects for criminal prosecution at one of the highest rates among the 90 federal districts of the United States.

But the percentage of such cases accepted for prosecution by the U.S. attorney has been among the lowest in the nation for years and was dead last in 2007, according to the Transactional Records Access Clearinghouse, an organization that analyzes the data of federal agencies and evaluates their effectiveness.

U.S. Attorney Gregory Brower offered no explanation for the statistics, which are based on 2003-2007, before he took office early this year. But former U.S. Attorney Dan Bogden, who was in charge four of those five years, said that TRAC must have misinterpreted statistics from Nevada and that correct interpretation would have shown exemplary teamwork between the two agencies, particularly in Project Safe Neighborhoods, a national program that involves ATF, U.S. district attorneys and local law enforcement agencies.

“It enabled us to take some very nasty, violent people who were carrying guns and put them in prison a long time,” Bogden said.

And a low prosecution ratio appeared to be a trend. In all five years evaluated by TRAC, 2003-2007, Nevada was one of the five highest in rate of criminal referrals by ATF, taking into account Nevada’s population. Yet it was also among the bottom six in percentage of cases accepted for prosecution in each of those years.

The ATF’s resident agent in charge at the Las Vegas office, Don York, agreed with Bogden that the high number of criminal referrals reflects the success of Project Safe Neighborhoods. And the low prosecution rate? “You’ll have to ask the U.S. attorney,” York said.

But the current U.S. attorney, Brower, could not explain the low prosecution rate. He said on Sept. 4 he had not seen the TRAC numbers, released a week earlier, and would not comment on them even if he had seen them.

“It’s not a numbers game in my opinion,” he said. “We try to take the best of the best cases, or the worst of the worst, depending on your perspective. And I certainly don’t mean to knock the ATF, which does a great job, but as with any investigative agency, they’re going to bring you a certain number of cases that you just can’t take to trial.”

In Nevada, that “certain number” the U.S. attorney decided not to take to trial last year was 88 percent of all ATF referred for prosecution. The next-highest rejection rate came from Washington, D.C., where prosecutors rejected 21 out of 29 cases presented, 72 percent. Nationally, 30 percent were declined.

Steve Myhre was acting U.S. attorney in Nevada during 2007, and he is still with the U.S. attorney’s office here. He redirected a phone message requesting comment to the office’s publicist, Natalie Collins.

She attributed the statement to Carolyn Nelson, senior adviser in the Office of Public Affairs of the U.S. Department of Justice, and was unable to cite any example of the misleading “pattern” she attributed to TRAC.

In a May 2003 announcement about Project Safe Neighborhoods, the Justice Department said that “gun crime reduction is the top domestic criminal justice initiative of President Bush.”

Bogden left office in February 2007, one of eight U.S. attorneys forced from office by the Bush administration in a house-cleaning that was portrayed as politically motivated. He is now in private practice in Reno.

Bogden was admired in Southern Nevada for his office’s successful prosecution of public corruption cases. But the TRAC figures, which Bogden disputes, said he consistently declined most prosecution opportunities in a program that was the centerpiece of the Bush administration’s crime-fighting programs.

But despite the high percentage of ATF cases refused for prosecution, the number of federal convictions for gun crimes in the Nevada district increased remarkably during Bogden’s years in office, peaking at 140 in 2003. There had been 11 in 1999.

In 2004, the Southern Nevada PSN Task Force received an honorable mention award for its work at a national Project Safe Neighborhoods conference.

“It was the most productive use of our time and resources,” Bogden said. “And the crime rate reached new lows by the time of the 2004 election.”

York explained the basic principles of Project Safe Neighborhoods as local authorities tailor it to the needs of Southern Nevada.

“The idea is to take the worst of the worst off the street,” York said. “If this person has multiple felony convictions and is caught with a firearm, he is considered for federal prosecution.”

And such is the case if a felon is caught in federally subsidized housing with a firearm.

In June, Brower’s office announced that the program in Clark County would target suspects who commit crimes on or near school property and especially those 18 to 24 years old.

“The idea being that if we can interrupt and prosecute early, maybe we can prevent his embarking on a long career in crime,” Brower said.

Every two weeks, a committee representing the participating agencies reviews the cases and decides which to refer for prosecution, York said.

Any person convicted of even one felony, who later possesses a firearm, has committed a new felony subject to ATF jurisdiction, York said.

But the winnowing process and prioritization criteria such as schools, multiple felonies and federal housing make sure prosecutions are aimed where they are expected to do the most good.

“Any that go forward tend to involve bad previous convictions,” he said. “Usually crimes of violence or serious drug convictions.”

Bogden said all those rejected for federal prosecution, when he was in office, were prosecuted in state courts.

But telephone calls seeking confirmation, made to the Frank Coumou, the Clark County chief deputy district attorney in charge of gun crime prosecutions, were not returned. Nor did Undersheriff Ron Jett of the Metropolitan Police Department or Capt. James Ketsaa, who were Project Safe Neighborhoods spokesmen in the June news conference announcing the school-violence initiative, return calls seeking explanation.

The national Project Safe Neighborhoods program was supported by the National Rifle Association because it relied upon enforcing existing gun laws against serious criminals rather than creating new laws.

“We’re undergoing a huge budget crunch in Nevada, and they’re talking about closing (at least one Nevada prison),” Smith said. “If we prosecute more under state jurisdiction, we’re going to have to house them.”

The Department of Justice has poured more than $2 million into Nevada to fund Project Safe Neighborhoods since it started in 2002, according to figures provided by Collins, the U.S. attorney’s publicist.

The same data show 1,065 people have been charged with federal firearms crimes through the program. She did not provide the number of those who were convicted.

But some were brought down by ATF’s undercover programs, which target “armed career criminals,” defined as those who already have three or more violent crimes or serious drug offenses and nevertheless possess firearms.

Thomas L. Chittum, a resident agent in charge of the agency’s Violent Crime Impact Team in Nevada, said the agency is criticized sometimes for the high proportion of gun cases it pursues against relatively low-level retail drug dealers. But he defends those choices.

“Wherever there are drugs, there’s guns,” he said. “But it’s at the retail level those guns are most likely to shoot somebody.”

Some of the TRAC analyses showed more positive results for ATF programs both nationally and in Nevada. When convictions were balanced against population, Nevada ranked a respectable 28th in number of convictions.

And nationally, TRAC calculated that the percentage of cases ATF referred for prosecution, which resulted in convictions, increased to 62 percent in 2007, up from 46 percent five years ago.

In Nevada, among the cases the U.S. attorney accepted from the ATF for prosecution, the conviction rate last year was 71 percent.

Most ATF convictions last year — 76 percent nationally and 83 percent in the Nevada district — were for firearm offenses. From 2003 through 2006, during Bogden’s administration, more than 90 percent in Nevada were gun-related

The agency also has jurisdiction over such crimes as cigarette smuggling, moonshine running, illegal resales of legally bottled alcohol and crimes involving explosives.

But the second-largest category of ATF convictions in this district last year, 7.5 percent, involved drug charges, generally spinoffs from cases in its core jurisdiction.

Only 10 percent of Nevada convictions were “others,” such as alcohol and tobacco cases.

TRAC, based at Syracuse University’s School of Management, states that its “core purpose is to make information about the federal government’s staffing, expenditures and enforcement efforts more accessible to the public.”

It frequently invokes the Freedom of Information Act and has sued in federal court to force federal agencies to disclose public records.