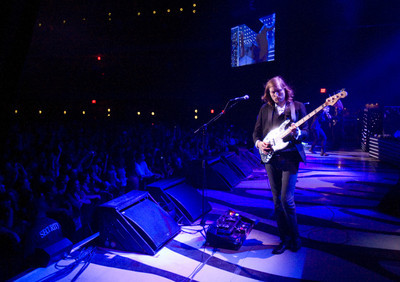 Some bands merely hail from a city; others distill its properties like strands of DNA.

Disentangle the double helix of artifice and artistry that forms the genetic make-up of Las Vegas, and you get four dudes who strive to embody both the glitzier-than-thou sheen of Sin City as well as its dust-coated conscience.

It’s a fairly nifty balancing act, one that The Killers increasingly seem to have down cold.

Seriously, they’re more reflective of Las Vegas these days than all-you-can-eat buffets and the empty pockets of homeward-bound tourists.

And so what better band to open the shiny new Joint at the Hard Rock on Friday night than a group of native sons equally enamored with the inclusiveness of the working class and the exclusiveness of the jet set.

They dress like the rock stars that they are in glittery sport coats and designer tiger-print threads, but pen tunes about the kind of blue-collar dreamers whose weekly paychecks probably couldn’t cover one of singer Brandon Flowers’ crystal encrusted shirts.

It’s not a contradiction, it’s the stuff that this city is made of.

Like their hometown, The Killers are populist and elitist in the very same breath, and the masses love them for it.

This was apparent at the christening of the Joint, a much larger, 4,000 capacity room with the kind of crystalline sound that the old space lacked.

The venue’s large open floor was packed with a smitten throng of revelers who bounced up and down for much of the show as if they had bedsprings for legs.

And for their part, The Killers earned their adoration.

Clearly, the band was happy to be here.

"Is it too early to say how awesome it is that we get to open this place?" Flowers asked but six numbers into the band’s 18-song set.

And with that, the band surged into "Bling (Confessions of a King)," a road-hardened rocker that Flowers sang, in part, from atop the monitors at the lip of the stage, stomping his foot up and down like he was trying to put out a fire.

Perhaps the most overlooked aspect of this band is just how formidable their rhythm section is, though it was hard not to notice on this night, with bassist Mark Stoermer and drummer Ronnie Vannucci conjuring up a kind of rolling thunder that’s normally accompanied by bolts of lightning shooting across the sky.

Throw in a guitarist, Dave Keuning, whose greatest asset is his versatility, be it conjuring up a slinky, near-ska shuffle ("Joyride") or muscular, hard-nosed funk ("Jenny Was a Friend of Mine") and then top it off with a Roman candle of a frontman, and you’ve got the blueprint for a band whose sound is even bigger than their wardrobe budget.

Still, The Killers are skilled at balancing force with finesse. To wit, one of the best songs of the night was the wistful shuffle of "I Can’t Stay," a whimsical little number peppered with spiritual overtones and honkin’ sax.

The crowd dug it, but they mostly went ecstatic for singles like "Human," "All These Things I’ve Done," "Mr. Brightside" and a show ending, pyro fueled "When You Were Young," chanting along loudly and clapping their hands over their heads as the hit parade whizzed by.

"Heaven ain’t close to a place like this," Flowers sang on fan favorite "Somebody Told Me," but judging from the tenor the room — think of the jubilance of 4,000 teens who’ve just lost their virginity — for many, it was at least a few more inches within arm’s reach on this night.

Contact Jason Bracelin at 383-0476 or e-mail him at jbracelin@reviewjournal.com.