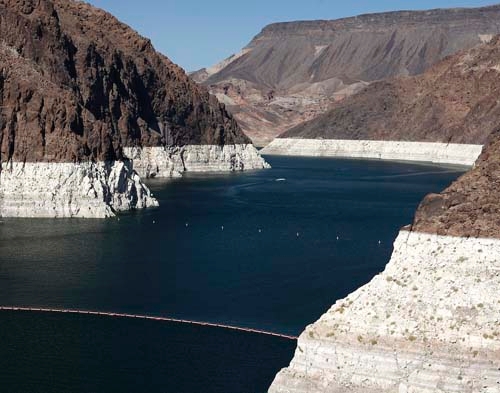 The bleached ring around the canyon just above Hoover Dam shows the water levels of Lake Mead in September, 2008. According to the latest projections from federal forecasters, the reservoir east of Las Vegas could drop by more than 13 feet over the next year.

Lake Mead is set to shrink some more.

According to the latest projections from federal forecasters, the reservoir east of Las Vegas could drop by more than 13 feet over the next year, as dry conditions and disappointing snowfall reduce the Colorado River to a little more than half its normal flow.

That would mark the second bad year on the river, which flowed at about 50 percent of average in 2012, resulting in roughly a 10-foot decline in Lake Mead.

The Las Vegas Valley draws 90 percent of its water from behind Hoover Dam. The man-made lake is about half full right now, but it still ranks as the nation’s largest reservoir.

Lake Powell, Mead’s upstream neighbor on the Utah-Arizona border, has dropped to about 50 percent of capacity.

“We’re essentially down to one reservoir worth of water on the Colorado River system,” said John Entsminger, deputy general manager for the Southern Nevada Water Authority.

Last year was also unusually dry, but Lake Mead was shielded from the effects somewhat because Lake Powell was still swollen with runoff from massive snowfall the year before.

The amount of water in Powell determines how much water Mead receives in a given year.

The two reservoirs are governed by complex federal guidelines that regulate releases and seek to keep the two bodies of water in balance.

In a monthly report to her board of directors on Thursday, Southern Nevada Water Authority general manager Pat Mulroy said Lake Mead is in better shape than it should be right now, thanks to a series of recent agreements that allow downstream water users to treat the reservoir as a long-term savings account.

Nevada, California and Mexico have all banked a portion of their Colorado River water in the lake for future use, raising the surface of the massive reservoir by roughly 10 feet, Mulroy said.

Projections from the U.S. Bureau of Reclamation call for Lake Mead to drop from its elevation of 1,122 feet above sea level to less than 1,110 by February 2014.

Three months after that, forecasters expect the lake to slip below 1,100 feet for the first time since the reservoir emerged from a historic plunge in the spring of 2011.

If — or perhaps when — the lake falls to 1,075 feet, it will trigger a federal shortage declaration and force Nevada, Arizona and Mexico to cut their river use. It will also prompt a final vote by the water authority on whether to build a controversial, multibillion-dollar pipeline to tap groundwater across eastern Nevada.

There is still time for a turnaround in the river’s fortunes. The mountains that feed the Colorado regularly receive snow into May and later.

The forecast for the next few days calls for flakes to fall across the western slope of the Rocky Mountains. In two key parts of Utah and Colorado, the National Weather Service warns that heavy snow is possible.