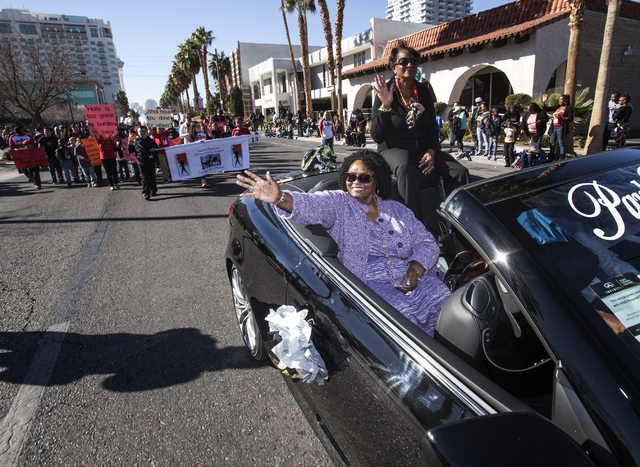 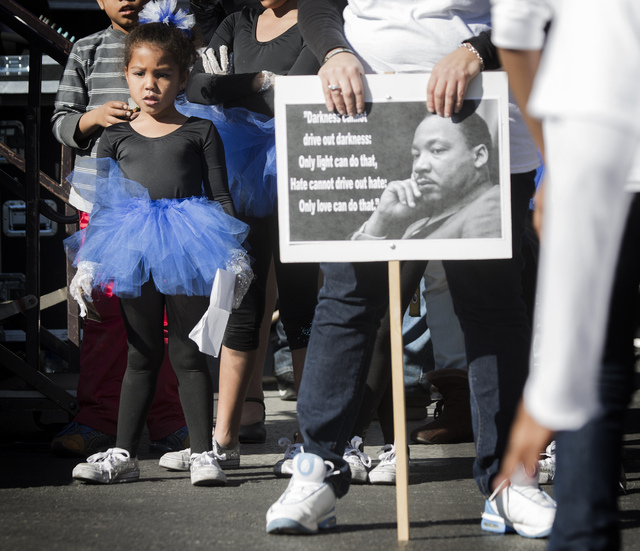 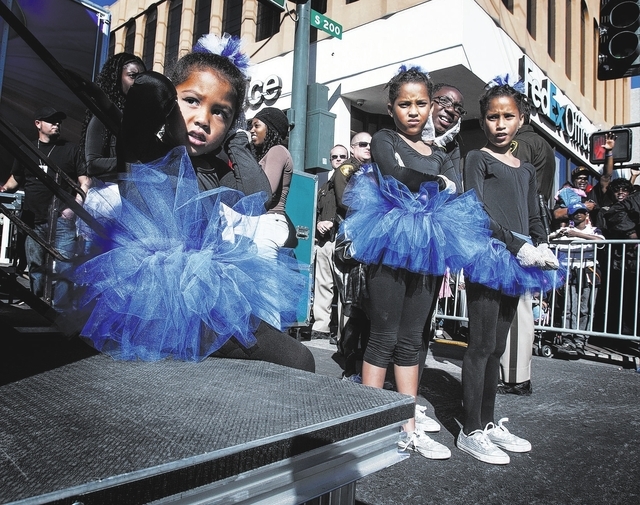 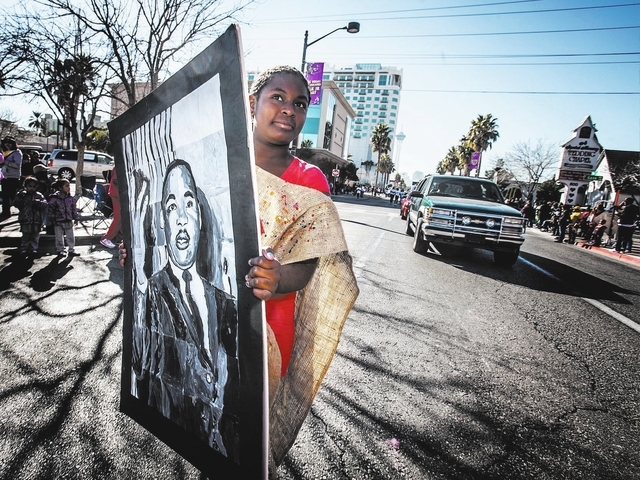 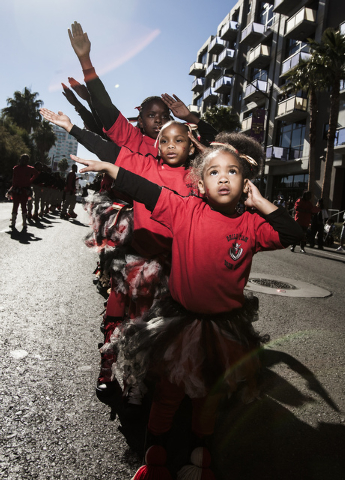 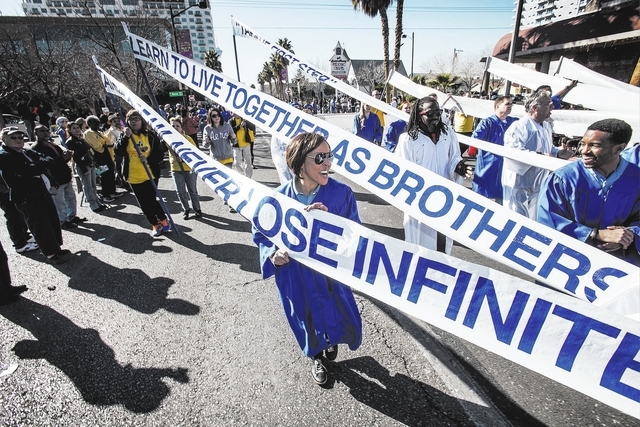 Bette Gaines Snyder marches with the MGM Resorts International during the Martin Luther King parade on 4th Street in downtown Las Vegas, Monday, Jan. 20, 2014. She served as one of the grand marshals.(Jeff Scheid/Las Vegas Review-Journal) 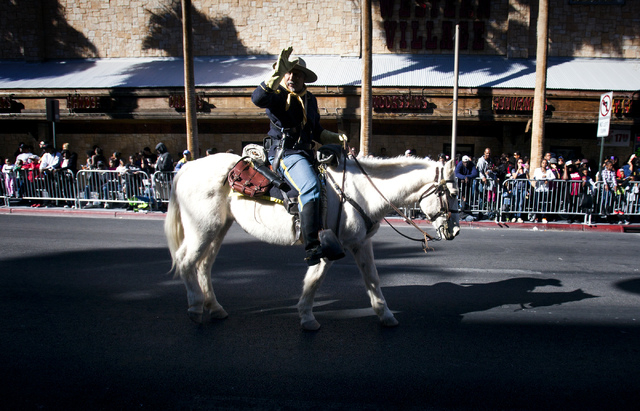 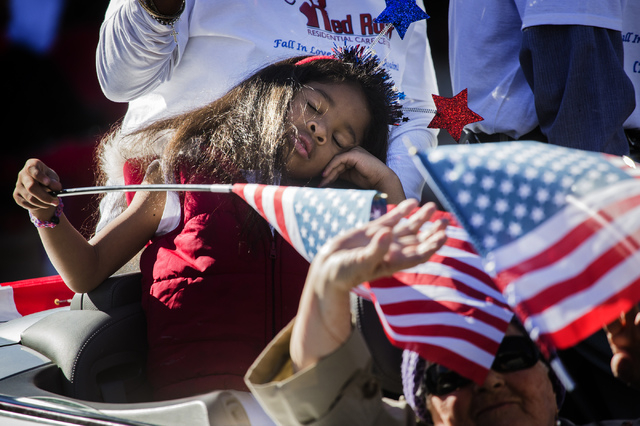 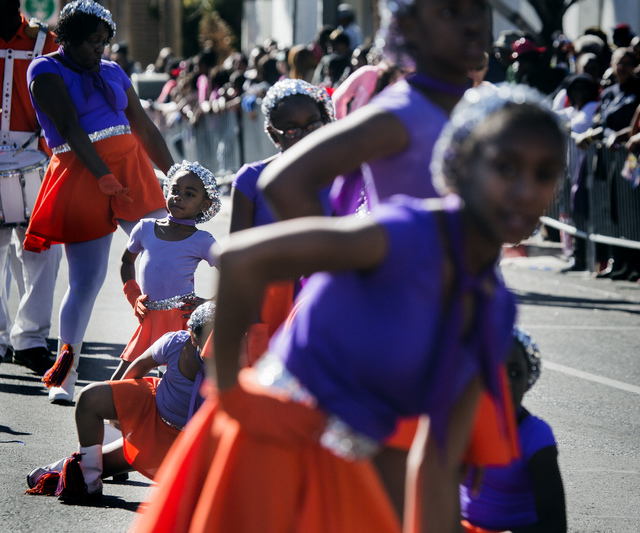 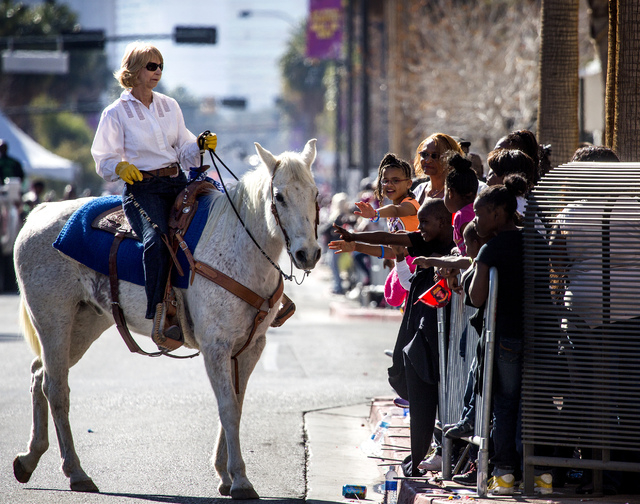 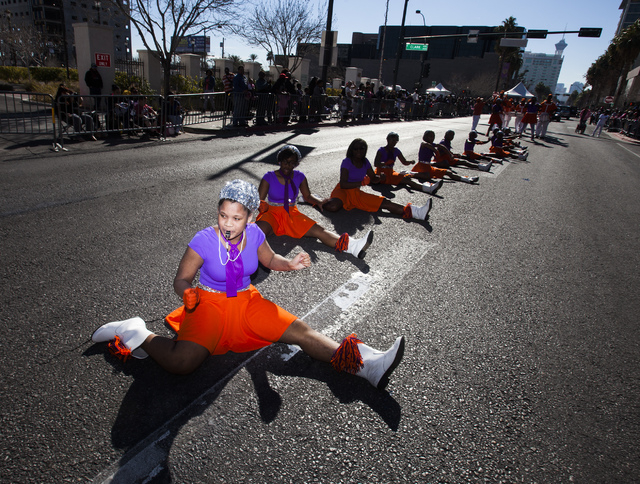 Sitting in the back of a black convertible with the top down, Ruby Duncan waited Monday for the parade to start as drummers and drill teams practiced around her.

As a civil rights activist and the former president of the Clark County Welfare Rights Organization, being the head of a rally isn’t new to her. In 1971, she marched arm and arm with other mothers down Las Vegas Boulevard seeking reform for welfare rights.

But this day, the 32nd annual Martin Luther King Jr. Day Parade, was more about celebrating a man and a dream than it was about fighting.

“I remember sitting on my couch watching TV as I heard the news of his death,” Duncan, 81, said. “It was sad. But this day is about his life and legacy. We have to still keep vigilant of that fight.”

King would have been 85 on Jan. 15. But instead of focusing on loss on the third Monday in January, a tribute to his birthday, the community joined to honor what he fought for.

“The dream is still alive,” said Patricia Brown as she watched the parade.

Hundreds lined the sidewalks of Fourth Street singing, cheering, chanting and dancing as about 100 floats passed by.

With signs that said “Protect Martin Luther King’s Dream” and “We are still dreaming” and float participants who led in the chorus of “Lift Every Voice and Sing” — known as the black national anthem — people used the holiday to contribute to the legacy.

“Free at last, free at last. Thank God Almighty we are free at last,” read one sign paying homage to the final line of King’s speech.

While people captured the spirit of King, many of the floats also paid tribute to other black icons such as Ray Charles, a singer, songwriter and musician; Frederick Douglass, who became an abolitionist after escaping slavery; and Nelson Mandela, a former South African president known for ending the racial caste system called apartheid. Mandela died in December.

Duncan, with another grand marshal, Ida Gaines, a former activist with the NAACP, have been pushing for equality since the 1970s and ’80s.

Both have been active in the African-American community, and now, the community honored their hard work as they led the parade.

Students from Duncan Elementary School, named for the local activist, marched behind the car — another moment for her that felt surreal, she said.

Gaines had marched in the parade with other organizations, but this was her first time as grand marshal.

“It’s such an honor,” she said. “It feels good to be acknowledged for the work I’ve done in the community.”

She said it’s important for people to come out and celebrate.

“This day has a special meaning,” Gaines added. “We need to honor the impact he had on the community. It helps builds us up.”

Standing with her two children, Crystal Washington said she hopes to use the holiday to start teaching her children about civil rights.

“My kids are old enough that they can start to learn who Martin Luther King was,” Washington said. “My daughter is 4, so I’m able to start to explain the significance of this day to her on her level.”

When she spoke to her children, she told them how King fought for equal rights and dreamed of a better world.

“We’ve made progress,” Washington said. “We aren’t fully at his dream. That’s why the parade is important. It reminds us to take steps toward the dream.”

Wearing a T-shirt with a photo of President Barack Obama on the cover of Time magazine, Kenneth Brown, Patricia Brown’s husband, took photos as floats passed along the street.

“This is our fifth year coming,” Kenneth Brown said. “It gets bigger and better each year. It’s great to see so many people come out and how multicultural the event has become.”

Brown said it’s important to remember how the dream has slowly advanced throughout the years.

“We’ve come a long way,” Patricia Brown said. “We aren’t completely there yet, but we are slowly advancing.”

Kenneth Brown said there was proof of how far the African-American community has come as he pointed to the photo on his shirt.

“The proof is our 44th president,” he said. “The dream is still alive. Today is more important than ever. We can’t let the dream die.”