If you are having problems accessing today’s e-Edition, please click on this link VIEW E-EDITION
By HENRY BREAN LAS VEGAS REVIEW-JOURNAL
November 14, 2013 - 9:36 pm 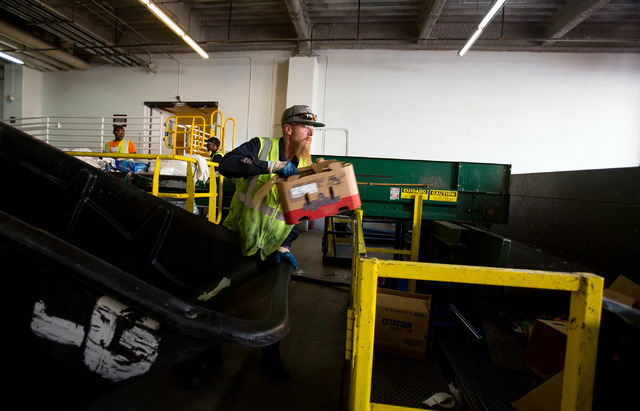 Glen Cooper of Republic Services recycles cardboard at Mandalay Bay Resort and Casino on Thursday. Traditional items like glass, paper and plastic are recycled from the hotel waste bins, while grease and linens are collected too. Last year, 42,000 gallons of grease were recycled in animal feed and biodiesel while 120,000 pounds of linen were donated to animal shelters. (Samantha Clemens/Las Vegas Review-Journal)

As resorts fight for customers on the Strip in the flashiest ways imaginable, a different sort of competition quietly unfolds on loading docks at the back of the house.

There, workers sift through bags of trash from the rooms, restaurants and casinos, culling and sorting reusable items from a shrinking stream of landfill waste.

A recycling arms race has broken out among the city’s gaming giants, and the battle for green supremacy continues to grow.

MGM Resorts International, Caesars Entertainment and Las Vegas Sands Corp. all have company-wide sustainability efforts and dedicated staff members who get paid to look for new ways to trim waste, cut water and power use and save money. Much of the focus lately has been on boosting recycling, and it goes far beyond the usual bins of paper, glass and aluminum.

Thousands of tons of leftover food is fed to pigs at a valley farm or turned into compost. Used shampoo bottles and bars of soap are sent to impoverished countries. Old plastic room keys and loyalty club cards are turned into picture frames or siding. Wine corks are reprocessed into sandals. Empty beer and liquor bottles are crushed and reconstituted as decorative blocks. Partial rolls of toilet paper are recycled into new rolls of toilet paper.

Caesars Entertainment is even launching a small pilot program to send cigarette butts to a recycler that wants the leftover tobacco and the plastic in the filters.

MGM’s chief sustainability officer, Cindy Ortega, said the company has more than tripled its recycling rate since 2007 through a concerted effort that has touched every department and each of the company’s 62,000 employees worldwide.

“It’s not easy being green. Kermit has it right,” she said.

All three gaming companies will be rolling out new programs and touting their eco-friendly advances Friday as part of America Recycles Day, a nationwide event founded in 1997 to promote and celebrate recycling.

A decade ago or so, recycling on the Strip “just wasn’t happening,” said Len Christopher, who heads up the recycling division of Republic Services of Southern Nevada, the valley’s trash company. “Now I have trouble coming up with a property that isn’t recycling.”

The gaming companies aren’t doing these things out of the goodness of their hearts. There is real money in recycling.

“Everything ties back to the bottom line,” said Lindsay Garcia, sustainability and public affairs manager for Caesars Entertainment. “We’re seeing astronomical savings with every program we roll out.”

The resorts are also under increasing pressure from their customers to cut down on waste, especially on the convention side of the business. Companies searching for a place to hold their annual meetings now use the sustainability of the venue as one their selection criteria.

Jeffrey Ruskowitz, a utility engineer for Caesars Entertainment, said the company’s sustainability program has sparked internal competition as individual properties try to out-recycle and out-conserve each other. As a result, the company as a whole reduced the total amount of waste it sent to landfills by roughly 25 percent last year and is on pace to push that so-called diversion rate even higher this year.

Caesars’ long-term goal is to send at least half of all its waste to someplace other than a landfill by 2020.

MGM Resorts expects to hit that number by next year and is at almost 44 percent now.

Sands has already surpassed that with an average diversion rate of over 55 percent at The Venetian and Palazzo and almost 80 percent at the Sands Expo and Convention Center.

And no one seems content to stop there. “I think 70 percent (company wide) is achievable,” Ortega said.

Local environmental advocates are encouraged but said there is more to be done.

“I think what the hotels are doing is good,” said Tara Pike-Nordstrom, recycling manager and sustainability coordinator for UNLV. “They need to bump up our image. I would like to go somewhere and tell people where I’m from and not have them say, ‘You’re from Las Vegas? You guys waste a lot.’”

Jane Feldman is conservation chairwoman for the Sierra Club in Southern Nevada. As a next step, she would like to see more recycled materials stay in the valley instead of being shipped out of state or overseas. To make that happen, state and local leaders must find a way to attract what she called “remanufacturing companies” to set up shop here and start making products out of what we throw away.

As it is now, the majority of the recyclable material collected on the Strip — and everywhere else for that matter — ends up on ships bound for China. “The joke we like to make is that we send it over there, and Wal-Mart is kind enough to make it into toys and send it back,” Christopher said. 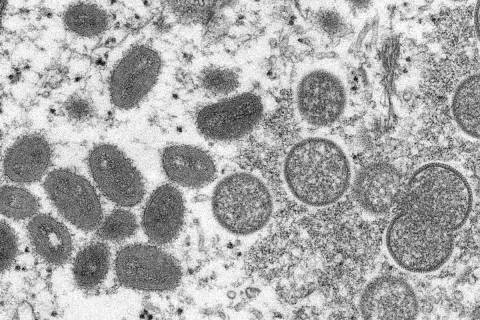 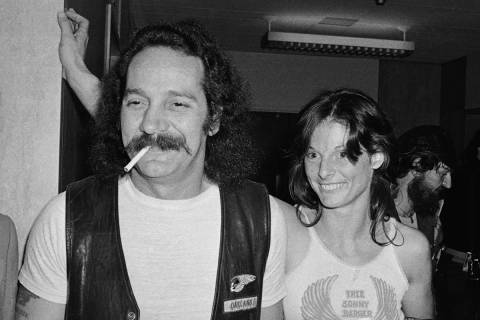