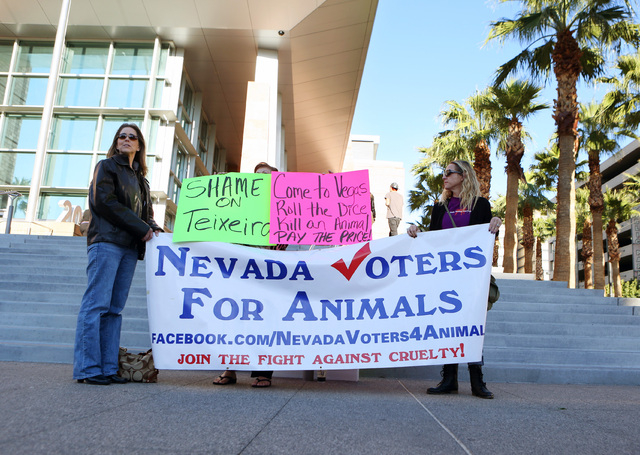 Donielle Hall, left, and Terri Cornell, with Nevada Voters for Animals, gather in front of the Regional Justice Center Wednesday. The group was protesting against Justin Teixeira, a University of Berkeley law student who was sentenced Wednesday for beheading a 14-year-old helmeted guinea fowl on Oct. 12, 2012, at the Flamingo Wildlife Habitat. (Ronda Churchill/Las Vegas Review-Journal) 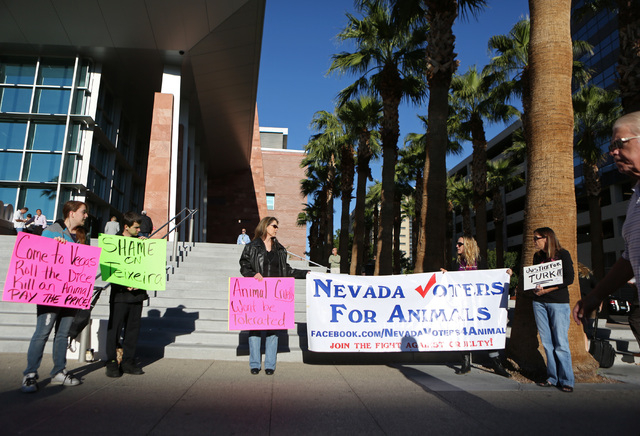 Members of Nevada Voters for Animals gather in front of the Regional Justice Center on Wednesday. The group was protesting against Justin Teixeira, a University of Berkeley law student who was sentenced Wednesday for killing an exotic bird on Oct. 12, 2012, at the Flamingo Wildlife Habitat. (Ronda Churchill/Las Vegas Review-Journal)

A University of California, Berkeley law school graduate who beheaded an exotic bird at a Strip hotel last year was sent to a prison boot camp on Wednesday as part of a plea deal he hopes will eventually reduce his felony conviction to a misdemeanor.

But first, Justin Teixeira must serve 190 days in “regimental discipline” in the Nevada Department of Corrections, which will include counseling, educational and physical training programs.

If he successfully completes the boot camp program and three years of probation, the felony charge of killing of another person’s animal would be reduced to a misdemeanor, said prosecutor Frank Coumou.

If Teixeira, 25, fails the program, he could be face one to four years in prison.

Following the hearing, Teixeira’s lawyer, Michael Pariente, said in a statement that his client was “extremely remorseful for his actions he committed while heavily intoxicated here in Las Vegas.”

Pariente added that Teixeira voluntarily entered an alcohol counseling program following his arrest and began volunteering for a California chapter of the Society for the Prevention of Cruelty to Animals.

“He is grateful for this opportunity to avoid a permanent felony conviction under his plea agreement,” Pariente said.

Teixeira pleaded guilty to the charge in June for decapitating Turk, a 14-year-old helmeted guinea fowl at the Flamingo’s Wildlife Habitat on Oct. 12, 2012.

Teixeira will be back before Judge Stefany Miley April 14 to determine if he successfully completed boot camp.

Prior to the sentencing, about six people picketed outside the downtown courthouse. One protester carried a sign that read, “Justice for Turk.” The protestors then attended the court hearing.

Meanwhile, Teixeira is awaiting the results of the California bar exam he took in July, Coumou said.

If he passes, the bar will have to review Teixeira’s case to determine whether he will be allowed to practice law. The state bar requires a background check to determine positive moral character, according to its website.

“It is the policy of The State Bar of California that persons who have been convicted of violent felonies, felonies involving moral turpitude and crimes involving a breach of fiduciary duty are presumed not to be of good moral character in the absence of a pardon or a showing of overwhelming reform and rehabilitation,” the website said.

As part of his deal with prosecutors, two other charges were dropped against Teixeira.

Two other law students took plea deals in the case.

Hazhir Kargaran in May pleaded no contest to three misdemeanors.

And Eric Cuellar earlier this year pleaded guilty to the misdemeanor charge of instigating an act of cruelty to an animal.

Both men served two days in jail and were fined.