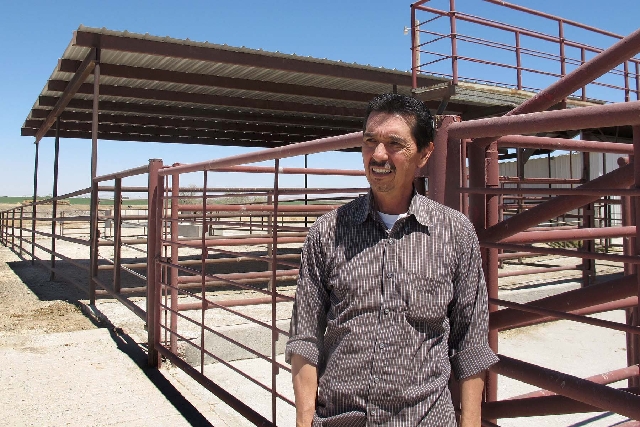 Valley Meat Co. owner Rick De Los Santos stands in a corral area outside the former cattle slaughterhouse he has converted to a horse slaughter facility in Roswell, N.M., on April 15. The plant - which has been waiting more than a year for federal approval of its operations - has become ground zero for an emotional, national debate over a return to domestic horse slaughter.

ROSWELL, N.M. — About 5 miles from this southeastern New Mexico town’s famed UFO museum, tucked between dairy farms, is a nondescript metal building that could be home to any number of small agricultural businesses.

But Valley Meat Co. is no longer just another agricultural business. It’s a former cattle slaughterhouse whose kill floor has been redesigned for horses to be led in one at a time, secured in a huge metal chute, shot in the head, then processed into meat for shipment overseas.

It’s also ground zero for an emotional, national debate over a return to domestic horse slaughter that has divided horse rescue and animal humane groups, ranchers, politicians and Indian tribes.

And Tuesday, it moved one step closer to becoming the first plant in the country in more than six years to slaughter horses, with a successful inspection by the U.S. Department of Agriculture.

At issue is whether the majestic symbols of Western culture are livestock or pets, and whether it is more humane to slaughter them domestically than to ship tens of thousands of neglected, unwanted and wild horses thousands of miles to be slaughtered in Mexico or Canada.

Front and center in the debate is Rick De Los Santos, who along with his wife, Sarah, has for more than two decades worked this small slaughterhouse, taking in mostly cows that were too old or sick to travel with larger herds to the bigger slaughterhouses for production.

Now, with cattle herds shrinking amid an ongoing drought, De Los Santos says he and his wife are just trying to transform their business and make enough money to retire. They’re seeking to slaughter domestically some of the thousands of horses that De Los Santos says travel through the state every month on their way to what are oftentimes less humane and less regulated plants south of the border.

“They are being slaughtered anyway. We thought, well, we will slaughter them here and provide jobs for the economy,” De Los Santos said.

Instead, Valley Meat has been ensnarled in a yearlong political drama that has left the plant idle and its owners the target of vandalism and death threats — warnings that increased after humane groups found a video a former plant worker posted of himself cursing at animal activists, then shooting one of his own horses to eat.

“People are saying, ‘We will slit your throat in your sleep. We hope you die. We hope your kids die,’” De Los Santos said. “Sometimes it’s scary. … And it’s all for a horse.”

Indeed, voicemails left on the company’s answering machine spew hate and wishes for violence upon the family.

“I hope you burn in hell,” said one irate woman who called repeatedly, saying, “You better pack your (expletive) bags (expletive) and get out of there because that place is finished.”

The couple have hired security and turned over phone records to federal authorities. They are, nevertheless, surprisingly candid about their plans, offering media access to the 7,200-square-foot slaughterhouse with one kill floor and two processing rooms that De Los Santos says can process 50 to 100 horses a day.

“It’s complicated, this industry of feeding the world,” Sarah De Los Santos says matter-of-factly. The meat would be processed for human consumption and exported to countries in eastern Europe and Asia.

Attorney Blair Dunn says agriculture officials found no issues at Valley Meat Co. during Tuesday’s inspection and told the owners they are recommending a grant of inspection be issued immediately.

The plant passed a similar inspection last year but then was told it couldn’t begin operations until the USDA developed an acceptable test to measure the horse meat for drug residue.

It wasn’t until the plant sued the USDA for blocking its application that the agency earlier this year agreed to move forward with the inspections necessary to allow Valley Meat Co. and about a half-dozen other plants around the country to slaughter horses.

But the Obama administration wants to prohibit such slaughters. The administration’s 2014 budget request excludes money for inspectors for horse slaughter plants, which would effectively keep them from operating.

The USDA did not respond to an email from The Associated Press asking about the inspection process and whether a drug test has been developed.

But Dunn said Department of Justice lawyers repeatedly have assured him that there are no impediments to the plant opening. Dunn says he expects final approval for the plant to come in a matter of days.

Humane groups and politicians including Gov. Susana Martinez and New Mexico Attorney General Gary King strongly oppose the plant. They argue that horses are iconic animals in the West, and that other solutions and more funding for horse rescue and birth control programs should be explored over slaughter.

Fueling opposition is a recent uproar in Europe over horse meat being found in products labeled as beef.

Still others are pushing for a return to domestic slaughter. Proponents include several Native American tribes, the American Quarter Horse Association, some livestock associations and even a few horse rescue groups that believe domestic slaughter would be more humane than shipping the animals elsewhere.

They point to a 2011 report from the U.S. Government Accountability Office that found horse abuse and abandonment increasing since Congress effectively banned horse slaughter by cutting funding for federal inspection programs in 2006. Because rescue groups can’t take care of all of the horses in need, tens of thousands have been shipped to slaughterhouses in Mexico.

In this mostly agricultural town, touted on its welcome sign as the Dairy Capital of the Southwest, there is surprisingly little uproar over the plant.

“I was against it,” said Larry Connolly, a retiree having coffee at Starbucks last week. “Then I started talking to some ranchers. They said they were for it. So I’m neutral.”

Local horse trader and former rancher Dave McIntosh said opening the plant would be the “best thing for the welfare of horses.”

But Sheriff Rob Coon said he believes most people in town oppose the plant. His office was inundated with calls and emails from irate people after the horse-killing video was discovered online last month. The former Valley Meat worker posted the video more than a year ago in response to animal activists opposed to horse slaughter.

“A lot of the ranchers are for it, simply because they want a place to take a horse rather than starve it out,” he said. “But it’s not our society. We don’t eat horses.”

Coon said his department has met with other local agencies in preparation for protests and potential trouble should the plant get the green light to open. But he clearly longs for the day when Roswell — whose main street is populated with statues of green extraterrestrials — was known for a rumored 1947 UFO landing, and little else.

“I was just telling our county manager: ‘What happened to our aliens?’” Coon said.