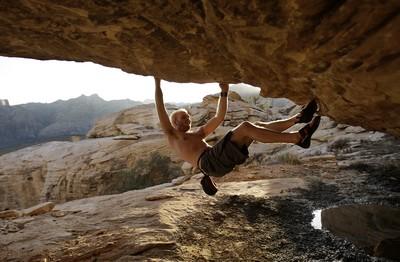 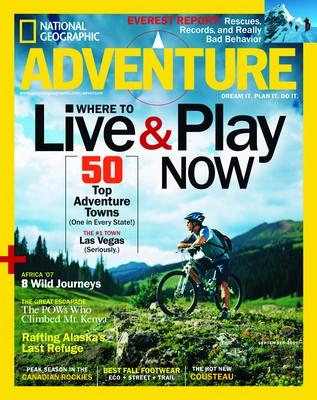 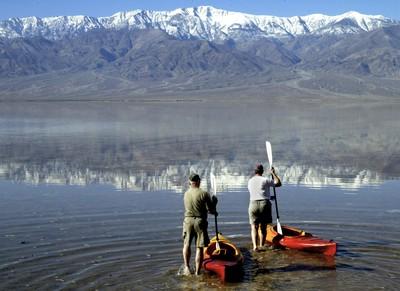 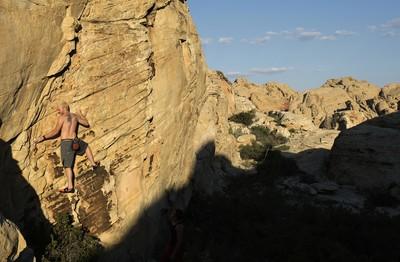 Top-flight entertainment, carousing until dawn and the chance at a life-changing jackpot aren’t the only things drawing visitors and new residents to Las Vegas.

For some people who come to this desert oasis, the rapidly developing high-rise hotels and casinos are less important than the area’s high-rising boulders and mountains.

As author Dan Koeppel writes, the city’s best-kept secret has been exposed.

National Geographic Adventure, in its September issue, names Las Vegas the nation’s No. 1 adventure town in which to live and play.

It might seem like an odd choice, considering the tantalizing reputation of Las Vegas. But Koeppel notes that the three-hour perimeter around Las Vegas contains six national parks, notably the Grand Canyon, Zion and Bryce Canyon, two national recreation areas, 13 state parks and millions of acres of national forest.

Not to mention Utah’s snowy slopes, Yosemite National Park’s pristine forests and the shores of the Pacific Ocean that are each a half-day’s drive away.

“We are the hub,” said David Bert, adventure activities manager at the Red Rock Resort, praising Las Vegas’ location in the Southwest, a region he described as “one of the most remarkable places on Earth.”

Each year the magazine puts together a “live and play” package where editors identify top cities in every state, featuring one. Asheville, N.C., and Boise, Idaho, have been recognized in the past.

This year, a National Geographic Adventure editorial board wanted to find a city that was affordable and close to outdoor activities. Koeppel said the editors picked Las Vegas for the cover story after a brainstorming session.

The freelance travel and adventure writer has written about Las Vegas a lot in his career and said it is the one city he never gets bored covering.

Radiating out from Las Vegas is some the world’s best mountain biking, rock climbing and canyoneering, said Travis Graves, co-owner and manger of Desert Rock Sports.

A Vermont native, Graves decided to make Las Vegas his permanent home after coming through the area during a college road trip.

Blown away by his surroundings, the then-backpacker, biker and hiker was awakened to the possibilities in the Southwest. He’s now a climber, too.

“There’s no way I could live in this town going on seven years if it weren’t for any of this,” he said.

“When you drive there you drive into the canyon itself,” he said. “All the sandstone walls rise from the valley. It’s a really immense feeling, because they are rising up on both sides of you. It’s like Red Rock magnified.”

Graves said that even during the summer months the blistering heat can’t stop outdoor enthusiasts.

Local hikers find reprieve from the sun at the top of Mount Charleston. People can be found biking, hiking and playing at the region’s multiple recreational areas year-round, he said.

In a lot of other cities such as Salt Lake City and Denver, outdoor sports fanatics are relegated to snow activities some months of the year, Graves said.

In the winter here, people can ski on Mount Charleston one day and climb in the sun at Red Rock the next, he said.

A visitor profile study by the Las Vegas Convention and Visitors Bureau showed that 48 percent of visitors from foreign countries in 2006 explored the area’s recreational and scenic attractions, including Lake Mead, Hoover Dam, Mount Charleston and Red Rock Canyon.

The Lake Mead National Recreation Area sees 8 million visitors a year, twice as many as the Grand Canyon, Lake Mead park spokeswoman Roxanne Dey said. It is the fifth most visited unit in the national park system, she said.

Even though outdoor recreation has grown in popularity nationwide, Las Vegas hotels traditionally have been more interested in keeping guests inside casino walls, Bert said.

The visitors bureau is trying to change that as it markets the city’s natural landscape and activities to meet changing demands, said Terry Jicinsky, the agency’s senior vice president of marketing.

Last year, some 38.9 million people visited Las Vegas, and an increasing number were in their late teens and 20s, he said.

“While they are certainly here to experience the Vegas night life, these are the people who, during the day, are looking for more adventure,” Jicinsky said.

Baby boomers are also catching wind of the area’s recreational fun, he said, adding that more than other generations, they want to remain active.

Graves said Las Vegas is not only one of the best places to visit, but it is also the best place to live. He said his friends in Vermont, a state known for outdoor adventure, are jealous of his lifestyle. They would need to take a two-week vacation from work to do what he can do in two days.

Because of Las Vegas’ employment opportunities, many adventure seekers are coming here to live. The city’s Department of Leisure Services is receiving more requests from residents for outdoor activities.

The city has increased the number of walking and jogging trails and is exploring a proposal to build mountain bike trails on some of the 680 acres it acquired near Floyd Lamb State Park.

“I am an outdoor freak and I’m a Las Vegan now,” Bert said.

He initially was hesitant to move to Las Vegas from Las Angeles. After all, what hiker wants to live in the desert?

It turns out many of them do.