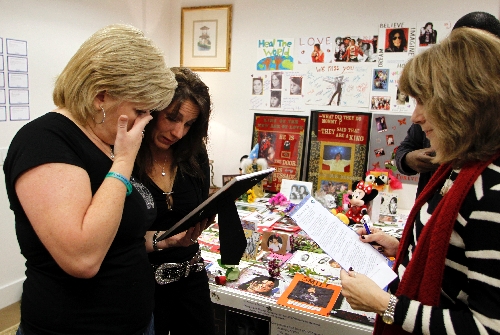 BEVERLY HILLS, Calif. — The contents of the house where Michael Jackson lived with his three children just before his death have sold for nearly
$1 million at auction.

Darren Julien, president of Julien’s Auctions, was unable to provide a more specific figure as he continued to tally the totals Saturday after the daylong auction, which brought in nearly triple the company’s pre-auction estimate of $200,000 to $400,000.

Among the highlights: a kitchen chalkboard where Jackson’s children wrote “I love daddy,” which sold for $5,000, and an armoire upon which Jackson wrote a message to himself on the mirror that fetched $25,750.

The auction also included furniture, artwork and other items from the rented mansion at 100 North Carolwood Drive, where Jackson lived as he prepared for comeback concerts in London before his death in June 2009.

The headboard from the bed where Jackson died at age 50 was removed from the auction at the family’s request, but the rug that was beneath the bed sold for $15,360. The estimate had been $400 to $600.

Julien’s Auctions re-created the mansion inside its Beverly Hills showroom and invited fans to fill the space where the bed would have been with a tribute to the late King of Pop. Julien promised to deliver all of the tribute items to Jackson’s children and family matriarch Katherine Jackson.