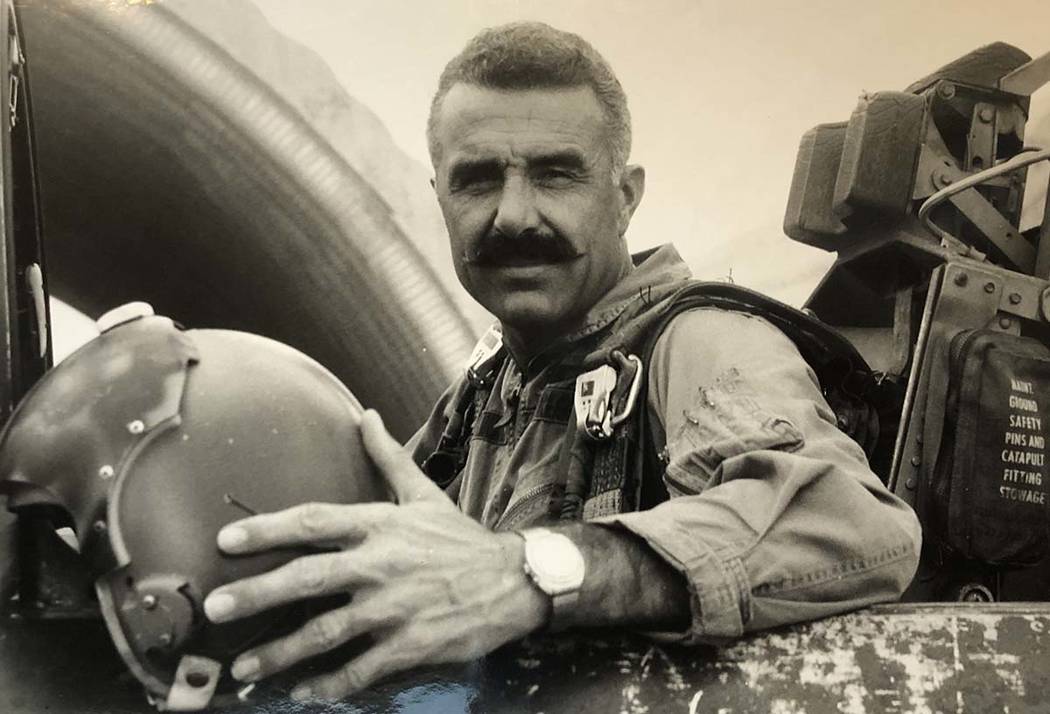 In a 1969 photo, a young Henry Buttelmann poses in his F-100 Super Sabre while serving in the Vietnam War. He was the youngest ace in the Korean War. Buttelmann, a longtime Las Vegas resident, died on Sept. 16, 2019. (Photos courtesy of Kent Buttelmann) 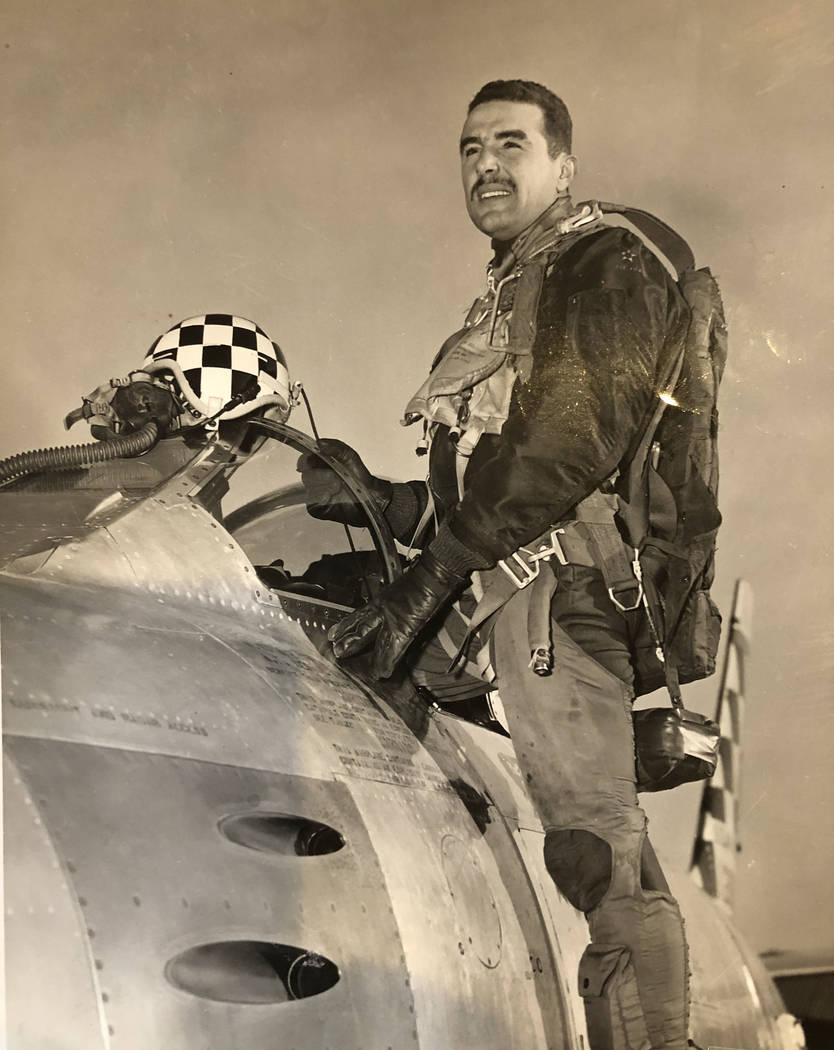 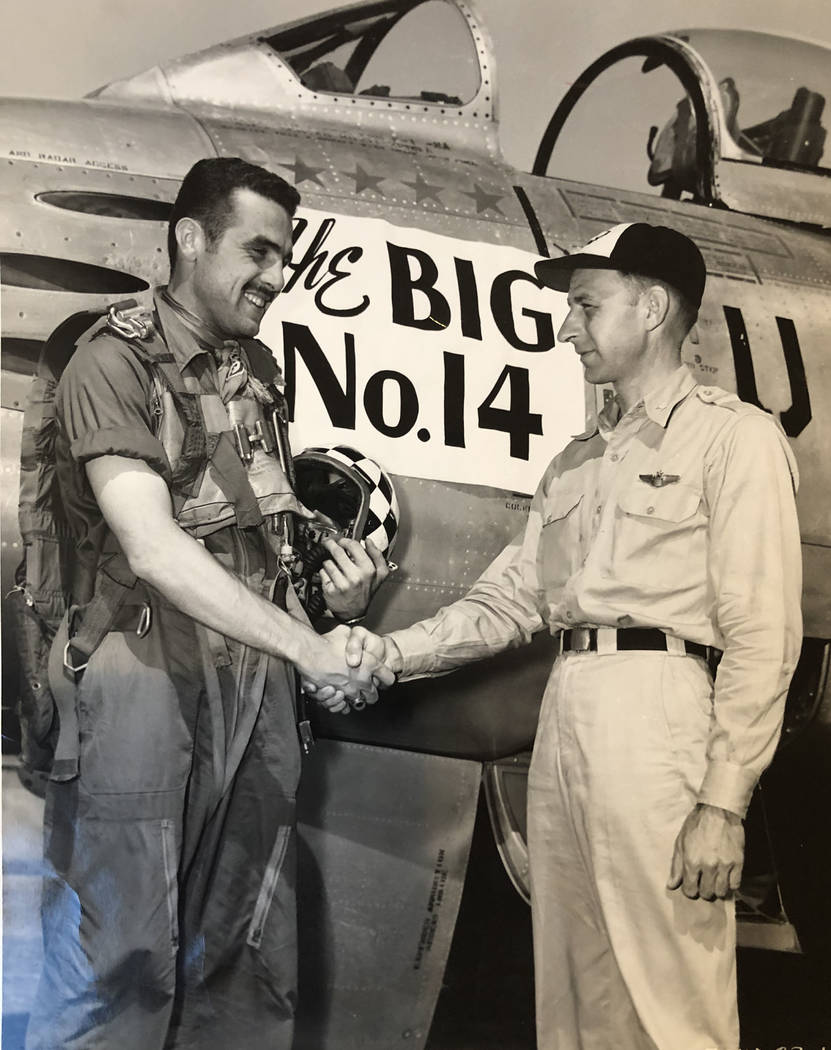 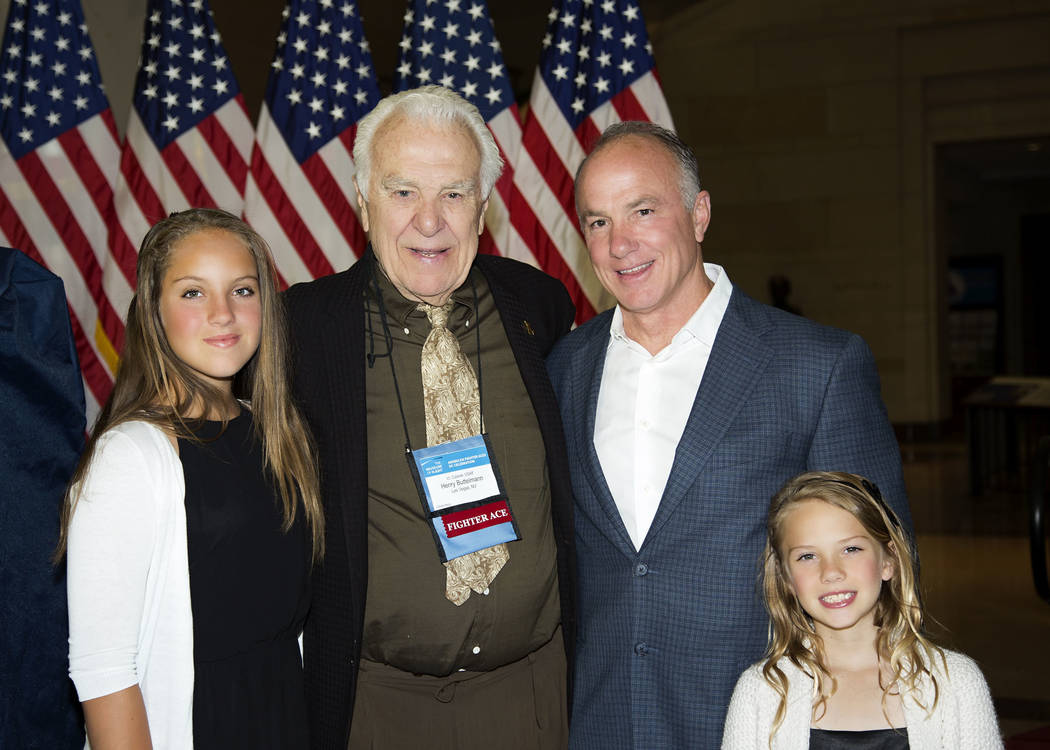 This May 2015 photo shows Lt. Col. Henry Buttelmann at the Congressional Gold Medal Ceremony in Washington with his son Kent and granddaughters Chloe and Eva. Buttelmann, a longtime Las Vegas resident, died, Sept. 16, 2019. He was the youngest ace in the Korean War. (Photos courtesy of Kent Buttelmann)

Lt. Col. Henry “Hank” Buttelmann earned a Congressional Gold Medal and was the youngest “ace” in the Korean War, but he couldn’t stand being saluted by the airmen at Nellis Air Force Base after his retirement from the service.

“He was a great person, very humble,” his wife, Audrey, told the Review-Journal on Tuesday. “He would salute back, but he didn’t like it. He would say, ‘I don’t want them to salute me now.’ ”

Audrey Buttelmann said her husband of 17 years died peacefully. He had battled dementia in recent years, she said.

Before his death, Buttelmann, a Silver Star recipient, was one of two living American aces from the Korean War. The last is Lt. Gen. Chic Cleveland of Montgomery, Alabama.

Buttelmann earned the title of youngest Korean War ace — a pilot who shoots down five enemy planes — at age 24.

In an interview with Airport Journals in 2009, Buttelmann said he flew 50 missions before encountering a MiG-15 enemy aircraft and decided that he “would do anything to get a MiG.”

It took him until near the end of the war to achieve his goal. On his 55th combat mission on June 19, 1953, he shot down a MiG-15, according to his biography at the Smithsonian Wall of Honor.

Eleven days later, he became the youngest Korean ace when he downed his fifth MiG on June 30. He shot down two more in July to bring his total to seven, just before the cessation of hostilities on July 27, 1953. All told, he logged 65 combat missions during the war.

Buttelmann grew up in Queens, New York, knowing he wanted to be a pilot. His parents were immigrants from Germany, and the first-generation American knew that he had to pay his way to make his dreams come true.

So he worked as a lifeguard at Jones Beach Island to afford flying lessons needed to join the Air Force.

After completing three months of advanced gunnery training at Nellis, he shipped out to Korea in December 1952 to serve with the 25th Fighter Squadron, 51st Fighter-Interceptor Wing, flying an F-86 Sabre.

“My dad told me that was the best time of his life, flying in Korea,” his youngest son, Kent, said Tuesday. “… Those were the glory days. He missed it immensely, that’s for sure.”

Kent Buttelmann said his father later volunteered for duty in Vietnam, though he was single and raising two boys while stationed at Hickam Air Force Base in Hawaii.

“He felt that was his duty, and he loved flying,” he said.

Kent Buttelmann said his father later returned to Las Vegas and was a longtime member and president of the now-defunct F-86 Sabre Pilots Association.

“He loved Vegas; that’s where he got his start in his military career,” he said. “It’s where his younger years were spent; he had an affinity for it.”

He said his father, who flew with the likes of Buzz Aldrin and John Glenn during his time in the service, kept quiet about most of his combat exploits.

But his son remembers one story about a close call during a dogfight with some MiG-15 fighters over Korea. The elder Buttelmann called it his most difficult kill in the 1992 interview.

He had just shot down a MiG when another began firing at him from beneath his plane, where he was unable to get a shot at it. He slowed his jet and kept turning into the MiG until the enemy pilot broke off, and he was able to escape by climbing into a storm system in the area.

“Had he stayed, he would have done all right,” Hank Buttelmann said. “I was extremely fortunate because there were thunderstorms in the area. … I got into the weather and stayed there. That saved me.”

Kent Buttelmann added that his father “landed the plane while it was on fire” when he returned to base.

The key to a fighter pilot’s success, he told his son, is that there has to be “no second thought when you see an enemy plane, and you’ve got to immediately engage.”

The younger Buttelmann said his father was also smart and frugal, earning his real estate license and investing in homes while still in the service. He often put his boys to work as laborers during renovations.

He was an affectionate father who lovingly called him “Kenter” and would regularly take him and his brother, Kurt, to church on Sundays. They would barbecue by the beach and he taught his sons to surf.

“He loved the water, and for me, being raised in Hawaii was the greatest life experience anybody could have,” Kent Buttelmann, 61, said.

When he took off for Vietnam, his boys stayed with family friends. The sons were concerned for their father, but he had taught them to be independent. They made their own breakfast and washed their own clothes even after he returned home from his tours.

“That’s probably the biggest takeaway from my father; the sacrifices he made not only for his country but to raise two boys by himself and to also serve in the Vietnam War two times,” Kent Buttelmann said.

“The risk he took leaving us and never seeing us again was probably the most impactful thing I think he’s ever done. It helped mold me as a man.”

With his sons and his wife, Henry Buttelmann is survived by his eight grandchildren and four great-grandchildren.

A memorial service has been set for Oct. 11 at the Abraham Lincoln National Cemetery in Elwood, Illinois.

This article was updated to correct the award Buttlemann received for his service.