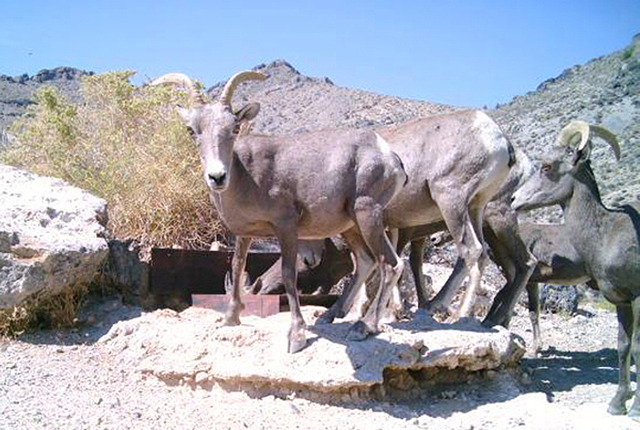 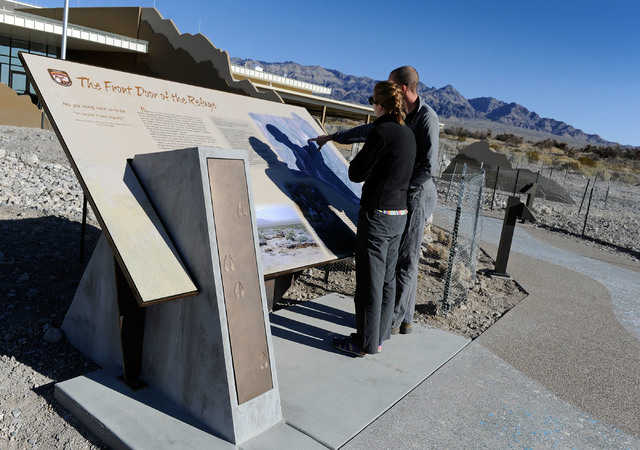 Marisa Peterson, left, and Brandon Lindsey examine one of the many information displays at the visitor center at the Desert National Wildlife Refuge. (David Becker/Las Vegas Review-Journal) 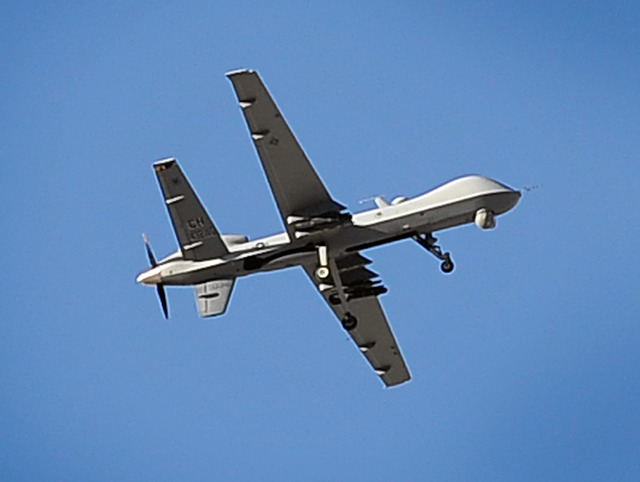 Conservation groups are blasting a plan in Congress that could split Desert National Wildlife Refuge north of Las Vegas and hand half of it over to the U.S. Air Force.

The change, tucked quietly into the House version of a massive defense authorization bill now in conference committee, would make land withdrawals permanent for the Nevada Test and Training Range and put the Department of Defense in charge of almost 850,000 acres currently managed by both the Pentagon and the U.S. Fish &Wildlife Service.

Attempts to get a Department of Defense comment on the plan were unsuccessful Wednesday, but the proposal’s backers say it will save the military the time and expense of having to reapply for an extension every couple of decades just to keep using the land the way it has been used since World War II.

But environmental advocates worry it could curtail future wildlife research and management on that part of the refuge.

“We’re really concerned about what it means. We’re trying to get to the bottom of it,” said Desiree Sorenson-Groves, vice president of government affairs for the National Wildlife Refuge Association, an independent nonprofit that works on behalf of the refuge system.

By the time conservationists learned about the proposal last month, the House had already passed the defense bill. They’re still not sure what to make of the language or why it was written into the measure apparently without consulting wildlife regulators.

“I’ve talked to people from the Fish &Wildlife Service. It was a complete surprise to them,” Sorenson-Groves said.

At 1.6 million acres, Desert is the nation’s largest wildlife refuge outside of Alaska.

President Franklin D. Roosevelt established it in 1936 to protect the desert bighorn sheep and its habitat, but a large portion of the refuge has doubled as a military training ground and bombing range since 1940.

Today the entire western half of the refuge — some 846,000 acres — is under military control and off-limits to the public. The land in question includes a portion of the Nevada Test and Training Range and all of Creech Air Force Base north of Indian Springs, where closely guarded operators fly unmanned aerial vehicles on missions around the globe.

Infamous and ultra-secret Area 51 is just a few miles from the refuge’s northern boundary.

The Senate version of the annual defense authorization bill does not include any reference to the refuge.

Sen. Harry Reid, D-Nev., has asked that the language approved by the House be dropped from the final version of the bill.

In a June 23 letter to Sen. John McCain, R-Ariz., chairman of the Senate Armed Services Committee, Reid said the Air Force and the Fish &Wildlife Service have worked together effectively for almost 75 years to manage the so-called “joint-use area” of the refuge. The House, he said, is trying to “fix problems that do not exist.”

“Should the House language be enacted, numerous threatened and endangered species and their habitats would no longer be monitored or protected by the (Fish &Wildlife Service), and important partners such as the Nevada Department of Wildlife would no longer be able to conduct important management activities within the Joint-Use Area,” Reid warned in his letter to McCain.

As word of the management change spread through the conservation community late last week, it sparked a social media campaign against the proposal complete with its own Twitter hashtag: #DontBombTheBighorn.

Sorenson-Groves was more diplomatic, noting that the Defense Department generally does “a great job managing for wildlife” when it’s required to do so.

What bothers her is the way this proposal was advanced. Burying it deep in a must-pass military spending bill is “inappropriate,” she said.

“It just seems like a back-door approach, and if there’s a legitimate need it should be a front-door approach,” Sorenson-Groves said. “You need to have full and open debate on something like this.”