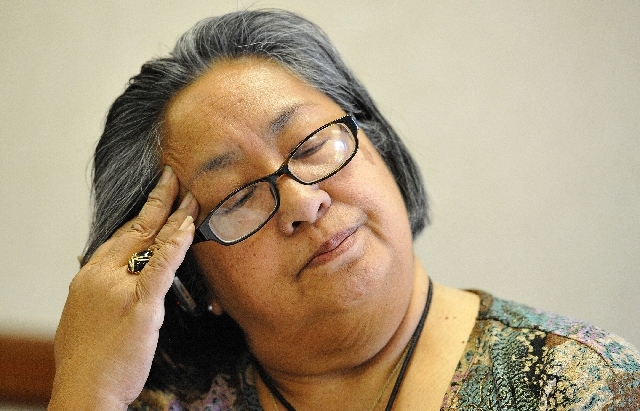 Johnnette Fafard describes her battle with the Department of Veterans Affairs over compensation for her late husband, Raymond. 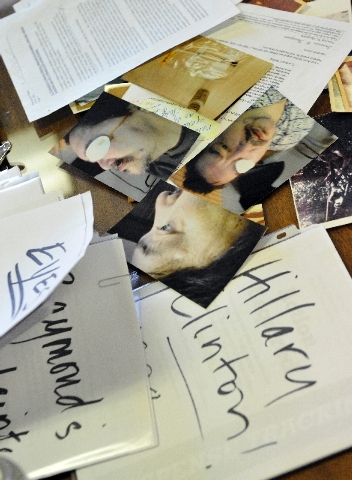 These documents have been used by Johnnette Fafard to prove her case to the Veterans Administration in her battle to win benefits for her late husband, Raymond. 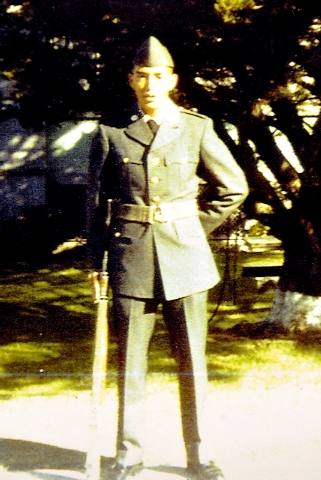 This family photo shows Raymond Fafard when he was in the Army. 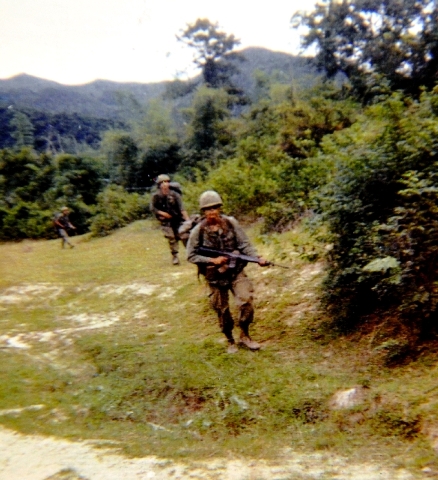 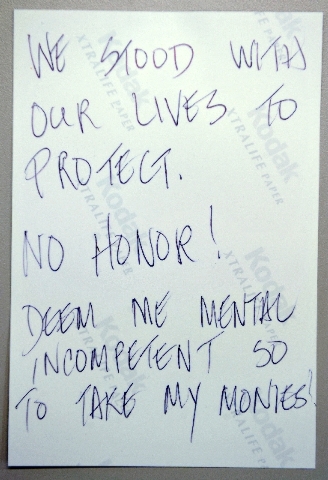 An inscription written by Raymond Fafard on the back of the photo of him on patrol in Vietnam.

The three “D” lament of many veterans seeking disability benefits from the Department of Veterans Affairs is one that Johnnette Fafard knows well.

For 34 years she battled the VA in Reno and Hawaii over her husband’s disability claims and medical problems.

Some benefits dribbled out from claims adjusters as his health deteriorated from illnesses like Parkinson’s disease, linked to exposure to Agent Orange herbicides the U.S. military sprayed in Vietnam.

Other compensation was eventually awarded, such as money for post-traumatic stress disorder, or PTSD, the nightmarish condition from combat stress that had ballooned to the point he couldn’t cope with society.

He developed diabetes, had heart surgery and suffered a stroke. He was eventually deemed unemployable and incompetent.

But other financial relief — such as compensation because wrong dates were alledgedly used to adjust his claims — hangs in limbo. Former Army Sgt. Raymond Roger Fafard died Feb. 25, a month after his 63rd birthday.

Four months after his death, his widow still seeks answers on her appeals that she keeps in a stack of binders.

One letter from the regional VA office in Reno confirms that paperwork requesting an automobile grant had been “misplaced” for six months.

While that was frustrating, she said it wasn’t nearly as disappointing as the response she received from the VA after she sought compensation because her husband’s legal blindness worsened.

The reason the VA gave was a citation from regulations pertaining to hearing loss.

“Based on the VA, he was denied for an increase because he cannot see out of his ears. Until today they will not acknowledge they had made a mistake,” she said in a May 30 interview.

A spokesman at the VA’s Reno office said Friday that Johnnette Fafard can still file for accrued benefits.

“The widow is potentially entitled to retroactive benefits that would have been paid to the veteran if he were still alive,” said spokesman Rusty Neal.

Johnnette Fafard’s issues with the VA come to light as Nevada’s congressional delegation is cracking down on the backlog of VA disability claims at the Reno office. With a wait time of 504 days for resolving a claim, the Reno office is second-worst in the nation, behind only the Los Angeles benefits office.

Johnnette and Raymond were playmates and grew up in Honolulu.

“We went to the same school, played together, rode bikes and skateboards,” she said.

He was drafted in 1969. “He did not choose to go into the military for benefits.”

He was assigned to Charlie Company, 503rd Infantry Regiment of the 173rd Airborne Brigade in Vietnam’s south-central coast region.

He earned a Purple Heart, a Combat Infantryman’s Badge, and an Army Commendation medal.

“He used to tell me, ‘I was a point man. I went into holes. I saw things that nobody saw first until I called them in,’” she said.

They were married in 1971, four months after he was discharged. He worked as a tour bus driver and life was normal for about a year until PTSD kicked in.

“We didn’t understand why he’d sit on the floor when planes would go over, or why he’d make me and my two children sleep in the living room with the lights on,” she said.

“I couldn’t figure out what was wrong with him because he was getting arrested and being put in the psychiatric wards,” she said. “Finally, when I took him in, the doctor said he has schizophrenia. They didn’t know what PTSD was.”

VA doctors gave him Prolixin shots for psychotic symptoms, but the drug also had a side effect linked to Parkinson’s disease.

He was injected with the drug once a month from 1979 until last year when “they found it caused complications with his other medications,” she said.

He also had vision problems. The VA’s treatment was to inject his eyes with Lucentis, which also caused complications that can be seen in photos Johnnette kept.

“I said, ‘This is how my husband walks around, with blood in his eyeballs. When he sneezes, it escalates that. There’s all these things and you people don’t see that?”

In 1983, Raymond started shaking, a sign of Parkinson’s disease, a degenerative disorder of the central nervous system. “It wasn’t until later that everything was shaking, his legs, his feet.”

VA doctors told her the symptoms were something other than Parkinson’s disease: “extrapyramidal syndrome,” or muscle spasms in the face and neck.

In addition to this new malady, Johnnette was still fighting for compensation for Raymond’s mental problems.

It wasn’t until 1994 “when finally someone heard us and said, ‘This man has PTSD,’” she recalled.

After five years of VA foot-dragging, she made a plea to the White House. She sent then-first lady Hillary Clinton an email in 1999 asking for help.

“We have been denied three times and granted a 20 percent increase for PTSD once. I believe we should have more but the (VA) thinks otherwise,” she wrote.

“This beautiful man I knew before Vietnam came home excited to be away from hell, thinking that his old lifestyle would resume. It was lost the day he left for boot camp. Remembering the smell and the faces of death and fear for his life is something I believe no one can understand,” she wrote.

In 2001, after seven years of haggling with the VA over his PTSD claim, Raymond was declared 100 percent disabled because he was unemployable.

The couple moved to Las Vegas in 2005 to be near their daughter and son-in-law.

In 2007, the VA flew Raymond to San Diego for heart surgery. Even after a successful operation, his problems persisted.

In 2009, Johnnette found him on the floor, suffering from complications brought on by a muscle control drug he was taking for Parkinson’s disease. He was rushed by ambulance to a hospital, treated and released.

It wasn’t until August 2011 that the VA recognized all his medical issues and allowed compensation of $4,057 per month. The VA declined to give him back pay for when his PTSD and Parkinson’s disease were diagnosed.

In December 2011, Raymond suffered a stroke. He received a 100 percent VA rating for service-connected stroke complications, but that was reduced to 10 percent last year.

“How do you declare somebody 100 percent on stroke and then turn around and call him mentally incompetent and then downsize from 100 to 10 percent?” she asked. “They didn’t want to answer.”

Johnnette sought help from Sen. Daniel Akaka, D-Hawaii, formerly of the Veterans Affairs Committee. That prompted a letter of explanation in July from Edward Russell, director of the VA’s Reno office.

“We explained to Mr. Fafard that we were withholding a portion of his benefits because we are proposing to rate him incompetent due to his inability to manage his VA monetary benefits,” Russell wrote.

Johnnette continued to push for more compensation for Raymond’s vision problem and challenged the VA’s decision about incompetency. She said a VA employee in Reno told her not to pursue the issue, or else “they’re going to take your husband’s money.”

Johnnette said she won’t give up. “I want an apology, and I want the restitution.”