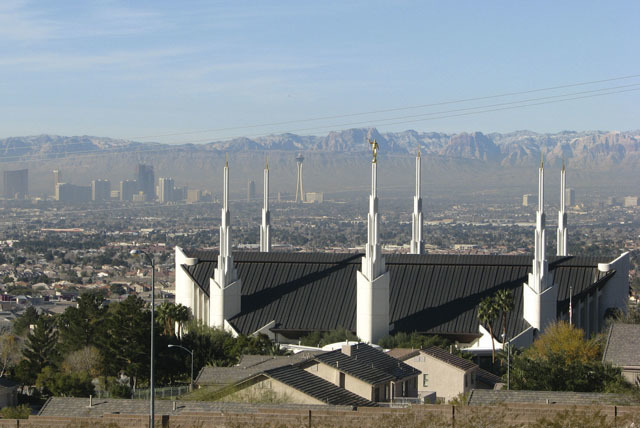 The Las Vegas Mormon Temple, 827 Temple View Drive, is shown with with the city in the background. About 4 percent to 5 percent of Nevada residents are Mormon. (Las Vegas Review-Journal) 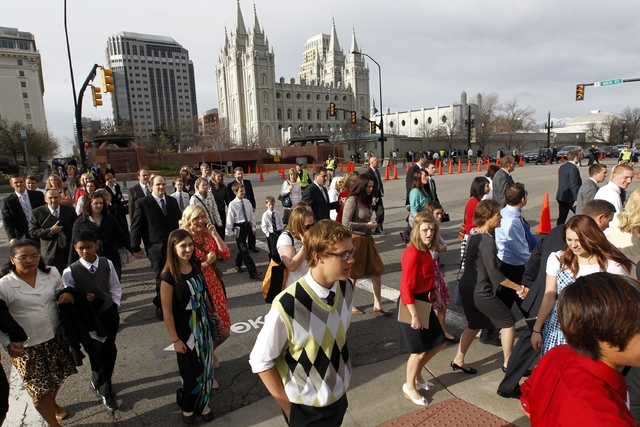 This April 6, 2013, file photo, shows the Salt Lake Temple as people walk to the Conference Center before the start of the 183rd Annual General Conference of The Church of Jesus Christ of Latter-day Saints, in Salt Lake City. An ongoing debate about the limited role of women within the Mormon faith will take its place alongside sermons and announcements during a weekend church conference that brings 100,000 members to Utah. Women can hold many leadership positions in The Church of Jesus Christ and Latter-day Saints, but they can't be bishops of congregations or presidents of stakes, which include a dozen congregations. (AP Photo/Rick Bowmer, File) 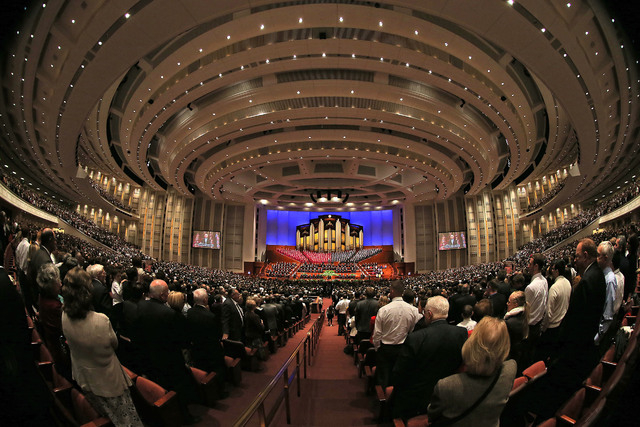 SALT LAKE CITY — Mormons in the United States are heavily concentrated in the West, with Utah having by far the most members, a new Gallup survey shows.

Six in 10 Utah residents say they belong to The Church of Jesus Christ of Latter-day Saints, the survey shows. That makes it the only state where more than one quarter of residents identify as Mormon.

Utah’s percentage of Mormons is more than double the proportion in any other state: Idaho ranks second with 24 percent of its residents belonging to Mormon church. And 4 percent to 5 percent of Nevadans are Mormon.

The results are not surprising: LDS church headquarters are in Salt Lake City and Utah was founded by early Mormon pioneers.

These state-level findings come from a nationally representative sample of more than 178,000 U.S. adults interviewed as part of Gallup Daily tracking from January through December 2013. For Utah, 2,115 interviews were conducted over this time.

The results paint a picture of the religious makeup of all 50 states.

The survey shows Wyoming has the third-highest proportion of Mormons with 9 percent. Next on the list are Nevada and four other states that have about 4-5 percent of their residents in the LDS church: Montana, Arizona, Hawaii and Alaska.

Washington, Colorado and Oregon round out the top of the list with 3 percent each. Eleven states have so few Mormons that the percentage rounds to 0, the Gallup survey shows.

Nationally, Mormons account for only about 2 percent of the U.S. adult population, the survey shows. The survey found that 51 percent of Americans call themselves Protestants or other non-Catholic Christians, making it the largest religious group in the U.S.

The fast-growing Mormon faith has reached 15 million members worldwide, LDS Church officials say, marking a three-fold increase from three decades ago. About 6.3 million are in the United States, the church says.

But the nonprofit Cumorah Foundation, which analyzes membership numbers independently of the church, estimates that only about 30 percent of Mormons worldwide regularly attend church meetings.

The percentage of Utah residents who call themselves Mormon has held steady around 60 percent for the past six years, past Gallup survey show. Gallup surveys done before 2008 used a different methodology, negating the value in comparing the older survey to the new ones, Gallup spokeswoman Stephanie Holgado said.