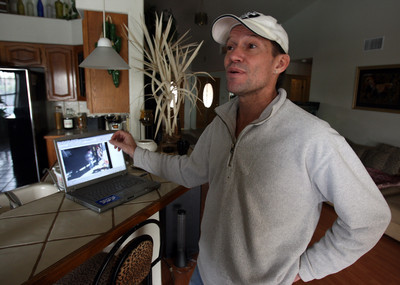 While he was on a two-week business trip, thieves ran off with more than $12,000 of his property. His television, computers and two credit cards were gone. So was his microwave oven.

Thompson, 48, called Las Vegas police to report the burglary, and a patrol officer arrived three hours later. After he demanded that police investigators collect fingerprints and DNA from cups and cigarette butts thieves left throughout the house, an investigator showed up an hour later.

The night dragged on into the early morning hours, until investigators finally left.

By most accounts, the officers did a thorough job — probably more than the case deserved, actually. On an average day, Thompson’s case would have been just one of 48 burglaries reported.

Yet for all that work, police admit the people who broke into Thompson’s home will probably never be caught.

Burglaries account for more crimes than murders, rapes, robberies and assaults combined in Clark County, and, of those crimes, burglaries are the least likely to be solved.

Nationwide, barely more than 1 in 10 cases will be solved, according to data from the Federal Bureau of Investigation.

That rate is similar in Clark County, where the Metropolitan Police Department covers the vast majority of the geographical area and similarly the county’s crimes.

“That’s a very typical case,” Capt. Stavros Anthony said of Thompson’s burglary. “And we will not solve that case.”

For victims of burglary cases, some effort to solve the case is expected. But such cases are so common and so difficult to solve that they typically end in frustration for police and victims.

Chances are that no more than 1,700 will get solved.

The FBI requires police departments nationwide to report their rate of “clearances” annually for a variety of crimes, including burglaries.

By the bureau’s definition, a case can only be cleared if an arrest is made or if it’s cleared exceptionally, defined as those rare instances in which the offender dies or the victim refuses to cooperate with prosecutors.

Over the past decade, the Metropolitan Police Department’s reported clearance rate for burglaries has hovered around 25 percent, a number that Anthony said didn’t accurately represent the real burglary clearance rate.

In 2006, the reported rate dropped to 5.8 percent, which may be a more accurate figure than the 23.6 percent clearance rate reported the year before.

Police were never able to provide a conclusive explanation for the drastic clearance rate drop. But they did provide several theories about possible changes in record-keeping:

•Whoever is compiling the statistics is relying on a different definition of “burglary,” thus skewing the numbers.

Anthony estimated that only 10 percent of typical burglaries in the department’s jurisdiction get solved, which is the national average for departments serving populations of 1 million or more.

In North Las Vegas and Henderson, the rate of burglaries cleared is 9.4 percent and 12.5 percent, respectively. But those departments handle only a fraction of the number of cases Las Vegas police see.

Regardless of the department or jurisdiction, burglaries are notoriously difficult to solve.

“We get burglary reports where we have absolutely nothing,” Anthony said. “All we have is that it was broken into, some stuff was taken.

“If somebody breaks into a house and nobody sees anything, we have absolutely nothing to follow up on. That’s basically it.”

Most homeowners don’t keep track of product serial numbers, so finding common electronic devices once they’re sold at pawn shops and returning them to their owners is nearly impossible.

Rarer items can be easier to find.

Las Vegas police Lt. Robert DuVall said a woman’s necklace was recently found at a pawn shop based only on the woman’s hand drawing of it.

“You talk to these detectives and their caseloads are huge,” Anthony said.

“For a department our size, that’s pretty much average,” he said.

Higher-profile crimes, such as rapes and murders, receive more attention and resources, and rightly so, Anthony said.

“Property crimes are just hard to solve, and the resources are not there like they are for person crimes,” he said. “That’s just the nature of the beast. You put resources where they’re the most important.”

Nevertheless, property crimes affect far more people than any other type of crime. And when victims, who expect personalized treatment, meet with overwhelmed police detectives, the results add to the impression of a neglectful police department, which might not be the case.

“Citizens want their possessions back; but really, they want to know that someone’s paying attention to them,” Sousa said.

Television shows have added to a false perception that police can thoroughly investigate every crime.

“When people have things stolen out of their car, there is sort of the expectation, based on watching shows like ‘CSI,’ that you’re going to have a full forensic sweep,” Sousa said. “And the resources just aren’t there for that kind of thing.”

But police philosophy is partly to blame for that perception, Sousa adds.

Since police departments began using 911 systems in the last half of the 20th century for reporting incidents, police sold the idea to the public that crime and managing society’s problems was the business of police, not the business of other agencies, individual communities or society in general.

“Now, they’ve sold that idea so well, that it’s almost become the idea that if something happens, whether it’s a serious crime or a minor disorder, it’s the police’s fault that something isn’t being done about it,” Sousa said.

Anthony said the Las Vegas police internal affairs department receives only a few complaints a year about detectives not doing their job.

Departments, including Las Vegas police, are approaching the burglary problem in a new light through community policing.

No longer will those detectives reside in the department’s building at Oakey and Decatur boulevards, sheltered from the communities they cover and out of touch with patrol officers.

The redeployment of detectives, which police are calling the largest such effort in department history, will make those detectives more accessible and accountable to the public, police said.

When burglaries are reported, a patrol officer traditionally visits the home and fills out a report, which is later given to a detective. The patrol officer can also decide whether to send an investigator to the home to dust for prints or collect evidence.

But patrol officers and detectives rarely communicate. Putting burglary detectives in area command centers, where patrol officers work out of, will change that. Detectives will be attending the same meetings and work side-by-side with the officers.

“We think this is going to have a dramatic impact on the clearance rates,” Anthony said.

That effort will be too late for Thompson, who said, “I’m so disappointed in this police department.”

Because of his burglary, Thompson said he is selling his home and moving to a different part of town.