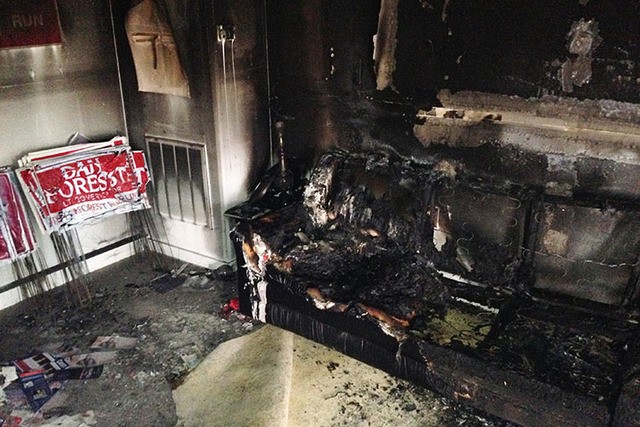 A burned couch is shown next to warped campaign signs at the Orange County Republican Headquarters in Hillsborough, North Carolina on Sunday. (Jonathan Drew/AP) 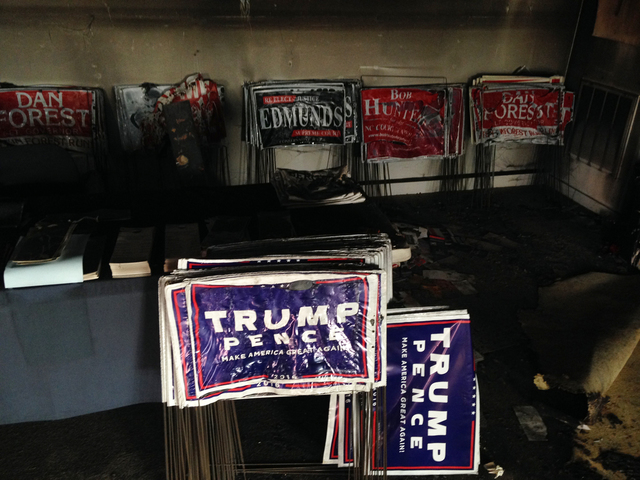 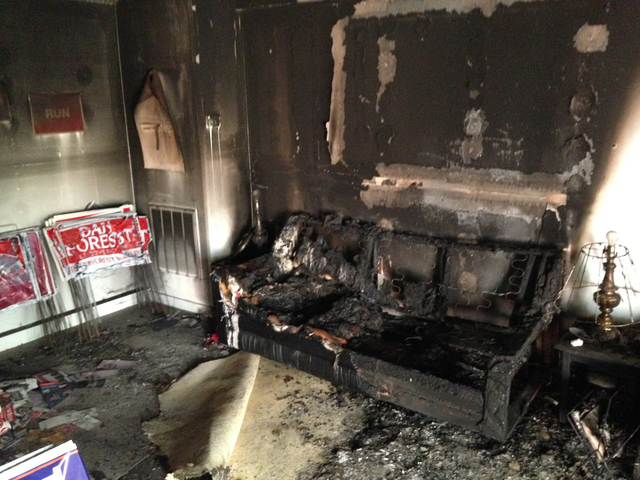 A burnt couch is shown next to warped campaign signs at the Orange County Republican Headquarters in Hillsborough, NC on Sunday, Oct. 16 2016. (AP Photo/Jonathan Drew)

HILLSBOROUGH, N.C. — Authorities are investigating after a local Republican Party office in North Carolina was vandalized and set on fire in what a state GOP official called an act of “political terrorism.”

A bottle filled with flammable liquid was thrown through the window of the Orange County Republican Party headquarters overnight, damaging the interior before burning out, according to a Sunday news release from the town of Hillsborough. The office was empty and no one was injured.

Also, someone spray-painted “Nazi Republicans leave town or else” on a nearby wall.

There were no new developments overnight in the investigation, Hillsborough Police Chief Duane Hampton said in an email Monday morning.

The violent act in the key battleground state has been condemned by public figures across the political spectrum.

A tweet from Democratic presidential nominee Hillary Clinton on Sunday said the attack “is horrific and unacceptable. Very grateful that everyone is safe.” An hour later, Trump tweeted: “Animals representing Hillary Clinton and Dems in North Carolina just firebombed our office in Orange County because we are winning.”

The attack on the Orange County HQ @NCGOP office is horrific and unacceptable. Very grateful that everyone is safe.

The North Carolina GOP tweeted thanks to both Clinton and Trump for their words of support.

In tweets of their own, North Carolina’s Republican Gov. Pat McCrory and his Democratic challenger, state Attorney General Roy Cooper both described the violence as a threat to democracy.

“I will use every resource as governor to assist local authorities in this investigation,” McCrory’s added, and Cooper’s said “the culprits must be caught and brought to justice.”

The federal Bureau of Alcohol, Tobacco, Firearms and Explosives was working with local investigators to solve the crime, which was discovered Sunday morning by another business owner.

Democrats joined a campaign to raise $10,000 to reopen the GOP office, meeting the goal in less than 40 minutes and “showing that Americans are thirsty for civility and decency, and that we love our democracy above all differences,” wrote the GoFundMe drive’s creator, David Weinberger, a researcher at the Berkman Klein Center for Internet and Society at Harvard University.

“It’s a great gesture. We appreciate it a lot, but I don’t know how much of that we’re going to get to use because of the campaign laws,” Orange County GOP chairman Daniel Ashley told the AP on Monday.

Ashley said he wasn’t aware of any previous threats against the office, several miles from the town’s historic square, and that he didn’t learn anything new from investigators. Local police, state troopers and State Bureau of Investigation officers were at the scene, aiding the federal agencies involved.

Republican offices around the state are re-examining their security, state GOP executive director Dallas Woodhouse said. People sometimes work after-hours in the office, and the bottle appeared to have landed on or near the couch where volunteers sometimes take naps, he said.

“They are working around the clock. It is a miracle that nobody was killed,” he said in an interview, calling the fire an act of “political terrorism.”

On Sunday afternoon, the walls of the multi-room office were covered in black char, and a couch against one wall had been burned down to its springs. Shattered glass covered the floor, and melted campaign yard signs showed warped lettering. The graffiti had been covered in paint.

At a news conference, Woodhouse urged Republicans to respond peacefully by turning out to vote in November. He said he’d received messages of support from Democrats.

Tom Stevens, mayor of the town about 40 miles northwest of Raleigh, said the act doesn’t represent the character of Orange County, which also includes much of Chapel Hill and the University of North Carolina campus. Registered Democrats outnumber Republicans by a 3-1 margin in the county that picked President Barack Obama by a lopsided margin in the 2012 election.

“I’d like to believe we aspire to respect hearing differing views,” Stevens, a Democrat, said in an interview. “This is very troubling.”