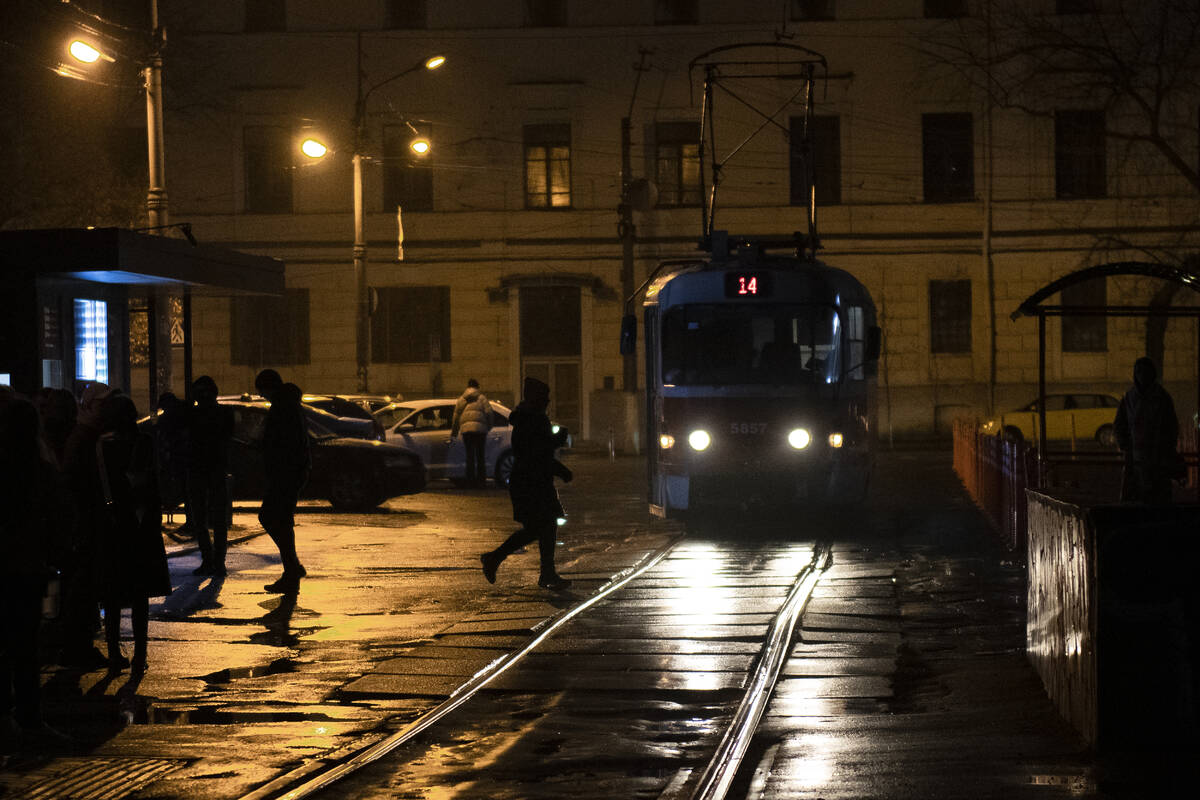 A tram arrives at a tram stop during a blackout in Kyiv, Ukraine, Sunday, Nov. 6, 2022. (AP Photo/Andrew Kravchenko) 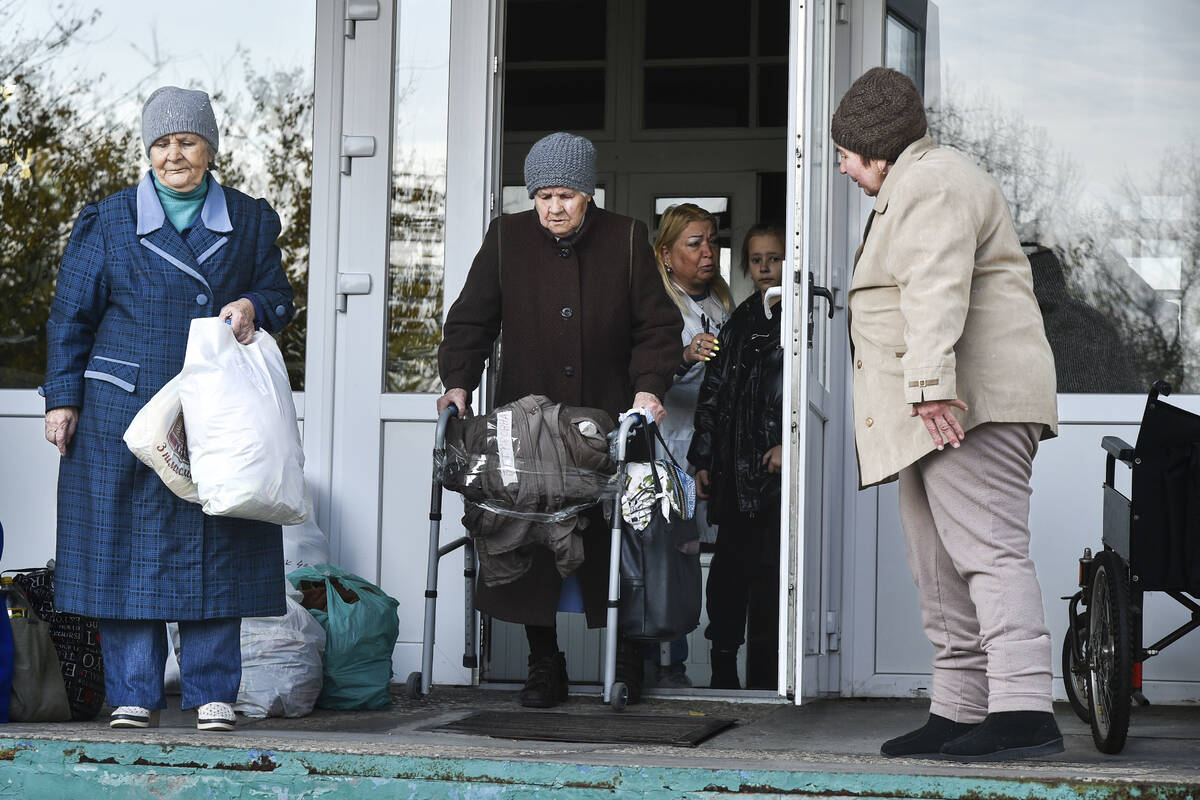 Elderly evacuees from Kherson leave their geriatric boarding house to move to the Crimea, southern Ukraine, Saturday, Nov. 5, 2022. Russian authorities have encouraged residents of Kherson to evacuate, warning that the city may come under massive Ukrainian shelling. (AP Photo) 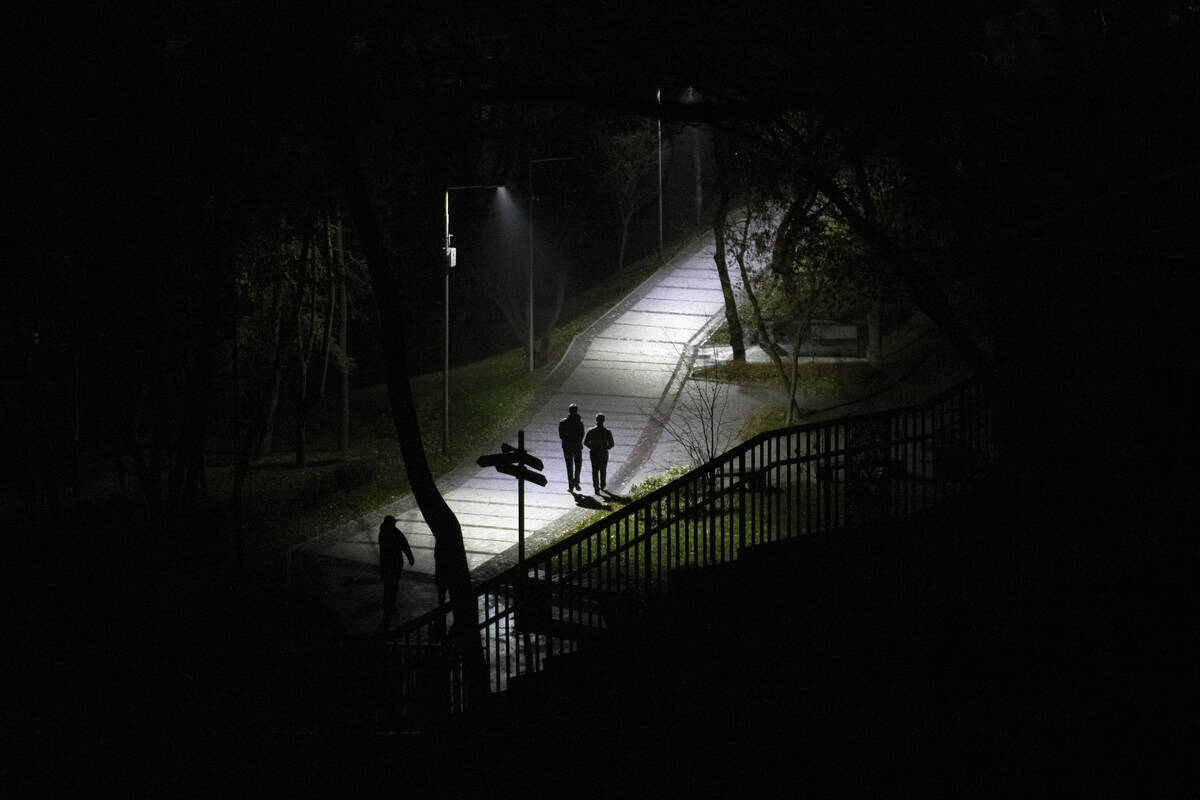 People walk in a park during a blackout in Kyiv, Ukraine, Sunday, Nov. 6, 2022. (AP Photo/Andrew Kravchenko) 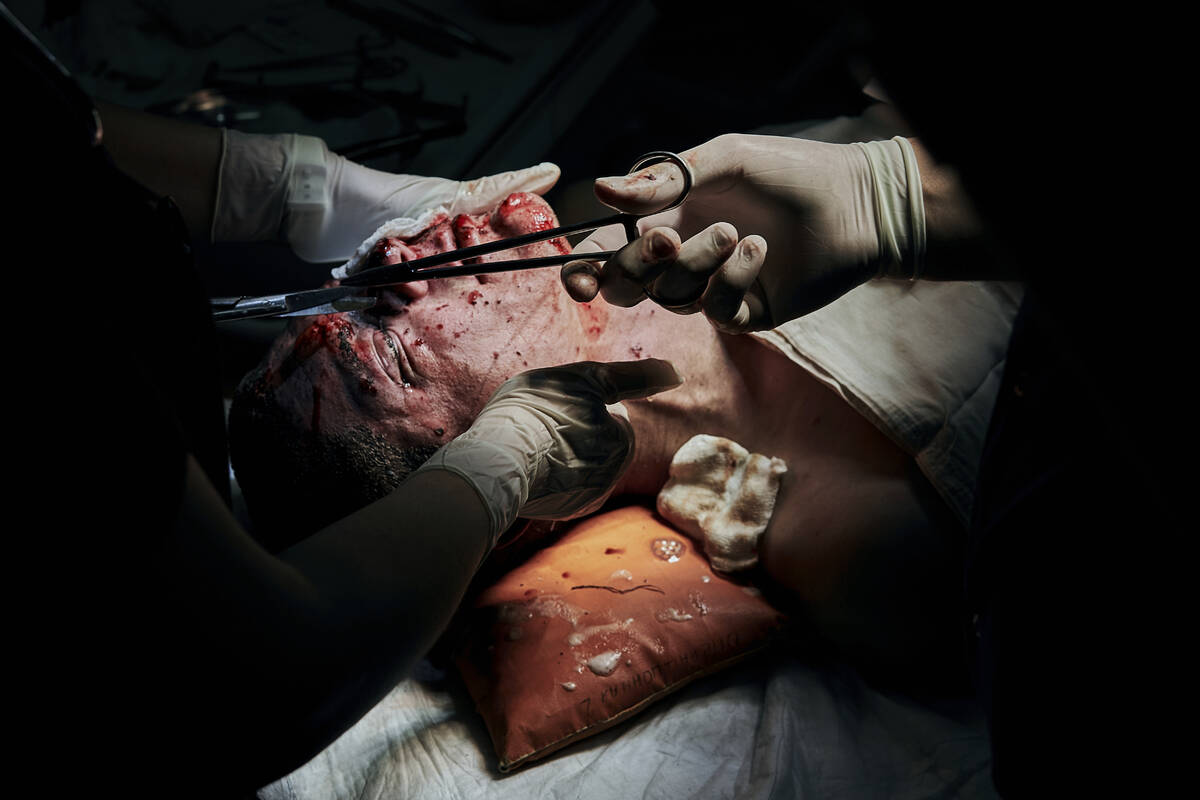 EDS NOTE: GRAPHIC CONTENT - Medics operate on a Ukrainian soldier wounded in a battle with the Russian troops in a city hospital in Mykolayiv, Ukraine, Thursday, Nov. 3, 2022. (AP Photo/LIBKOS) 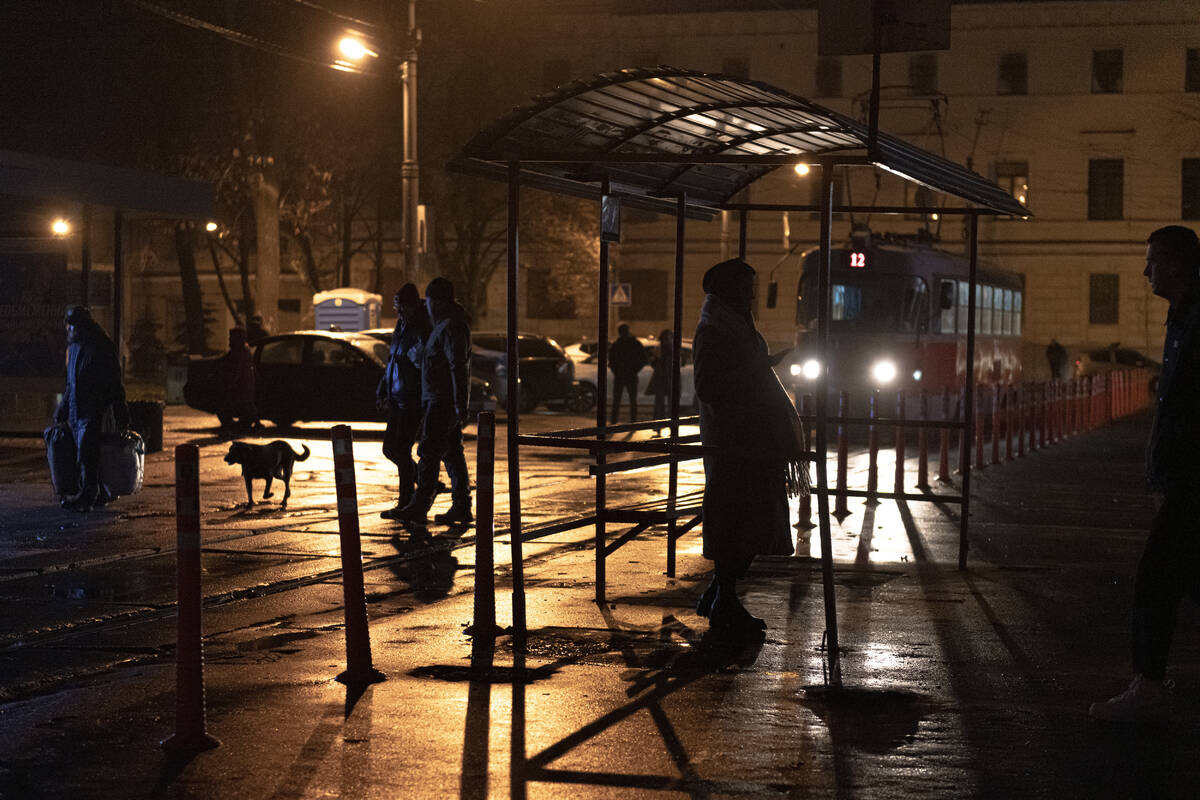 3M in Kyiv may face winter for without heat, water or power

KYIV, Ukraine — The mayor of Kyiv, Ukraine’s capital, is warning residents that they must prepare for the worst this winter if Russia keeps striking the country’s energy infrastructure — and that means having no electricity, water or heat in the freezing cold cannot be ruled out.

“We are doing everything to avoid this. But let’s be frank, our enemies are doing everything for the city to be without heat, without electricity, without water supply, in general, so we all die. And the future of the country and the future of each of us depends on how prepared we are for different situations,” Mayor Vitali Klitschko told state media.

Ukrainian President Volodymyr Zelenskyy said in his nightly video address to the nation Sunday that about 4.5 million people were without electricity. He called on Ukrainians to endure the hardships and “we must get through this winter and be even stronger in the spring than now.”

Russia has focused on striking Ukraine’s energy infrastructure over the last month, causing power shortages and rolling outages across the country. Kyiv was having hourly rotating blackouts Sunday in parts of the city and the surrounding region.

Kyiv plans to deploy about 1,000 heating points, but it’s unclear if that would be enough for a city of 3 million people.

As Russia intensifies its attacks on the capital, Ukrainian forces are pushing forward in the south. Residents of Ukraine’s Russian-occupied city of Kherson received warning messages on their phones urging them to evacuate as soon as possible, Ukraine’s military said Sunday. Russian soldiers warned civilians that Ukraine’s army was preparing for a massive attack and told people to leave for the city’s right bank immediately.

Russian forces are preparing for a Ukrainian counteroffensive to seize back the southern city of Kherson, which was captured during the early days of the invasion. In September, Russia illegally annexed Kherson as well as three other regions and subsequently declared martial law in the four provinces.

The Kremlin-installed administration in Kherson already has moved tens of thousands of civilians out of the city.

Russia has been “occupying and evacuating” Kherson simultaneously, trying to convince Ukrainians that they’re leaving when in fact they’re digging in, Nataliya Humenyuk, a spokeswoman for Ukraine’s Southern Forces, told state television.

“There are defense units that have dug in there quite powerfully, a certain amount of equipment has been left, firing positions have been set up,” she said.

Russian forces are also digging in in a fiercely contested region in the east, worsening the already tough conditions for residents and the defending Ukrainian army following Moscow’s illegal annexation and declaration of martial law in Donetsk province.

The attacks have almost completely destroyed the power plants that serve the city of Bakhmut and the nearby town of Soledar, said Pavlo Kyrylenko, the region’s Ukrainian governor, said. Shelling killed one civilian and wounded three, he reported late Saturday.

“The destruction is daily, if not hourly,” Kyrylenko told state television.

Moscow-backed separatists have controlled part of Donetsk for nearly eight years before Russia invaded Ukraine in late February. Protecting the separatists’ self-proclaimed republic there was one of Russian President Vladimir Putin’s justifications for the invasion, and his troops have spent months trying to capture the entire province.

Between Saturday and Sunday, Russia’s launched four missiles and 19 airstrikes hitting more than 35 villages in nine regions, from Chernihiv and Kharkiv in the northeast to Kherson and Mykolaiv in the south, according to Zelenskyy’s office. The strikes killed two people and wounded six.

In the Donetsk city of Bakhmut, 15,000 remaining residents were living under daily shelling and without water or power, according to local media. The city has been under attack for months, but the bombardment picked up after Russian forces experienced setbacks during Ukrainian counteroffensives in the Kharkiv and Kherson regions.

The front line is now on Bakhmut’s outskirts, where mercenaries from the Wagner Group, a shadowy Russian military company, are reported to be leading the charge.

Yevgeny Prigozhin, founder of the group who has typically remained under the radar, is taking a more visible role in the war. In a statement Sunday he announced the funding and creation of “militia training centers” in Russia’s Belgorod and Kursk regions in the southwest, saying that locals were best placed to “fight against sabotage” on Russian soil. The training centers are in addition to a military technology center the group said it was opening in St. Petersburg.

In Kharkiv, officials were working to identify bodies found in mass graves after the Russians withdrew, Dmytro Chubenko, a spokesperson for the regional prosecutor’s office, told local media.

DNA samples have been collected from 450 bodies discovered in a mass grave in the city of Izium, but the samples need to be matched with relatives and so far only 80 people have participated, he said.

In one sliver of good news, the Zaporizhzhia Nuclear Power Plant was reconnected to Ukraine’s power grid, local media reported Sunday. Europe’s largest nuclear plant needs electricity to maintain vital cooling systems, but it had been running on emergency diesel generators since Russian shelling severed its outside connections.