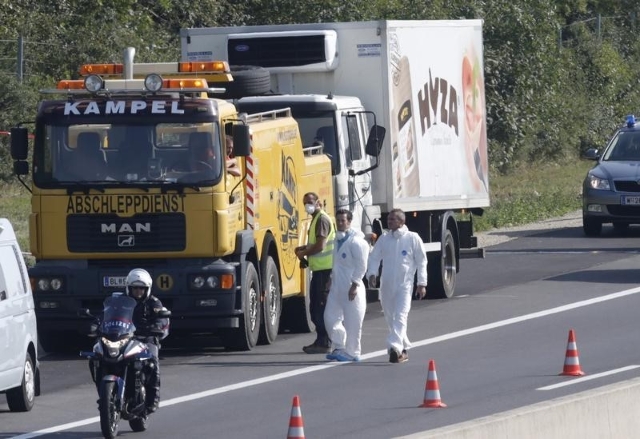 A truck in which migrants were found dead, is prepared to be towed away on a motorway near Parndorf, Austria August 27, 2015. REUTERS/Heinz-Peter Bader 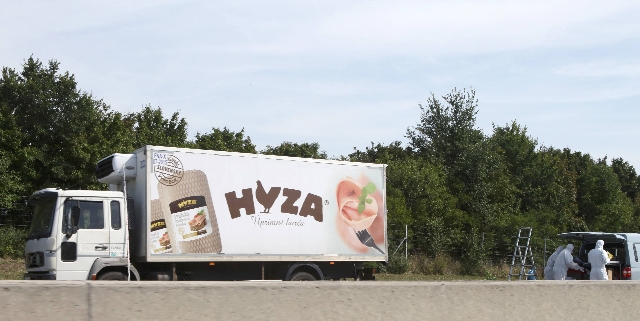 Forensic police officers work next to a parked truck in which up to 50 migrants were found dead, on a motorway near Parndorf, Austria August 27, 2015. As many as 50 refugees were found dead in a parked lorry in eastern Austria near the Hungarian border on Thursday. Police made the grisly discovery in the 7.5-tonne lorry stopped on the A4 motorway near the town of Parndorf, apparently since Wednesday. Police could not put an exact figure on the number of victims, whose bodies had begun to decompose. REUTERS/Heinz-Peter Bader 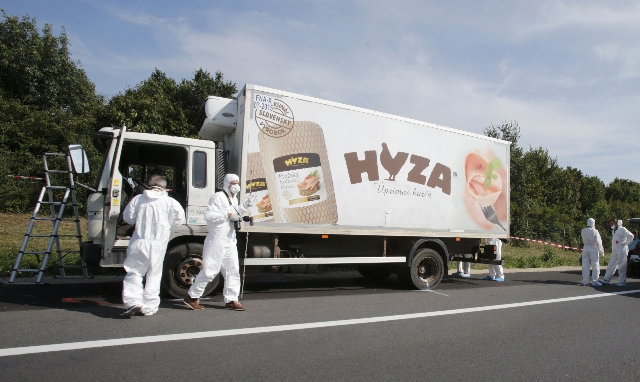 Forensic police officers inspect a parked truck in which up to 50 migrants were found dead, on a motorway near Parndorf, Austria August 27, 2015. REUTERS/Heinz-Peter Bader 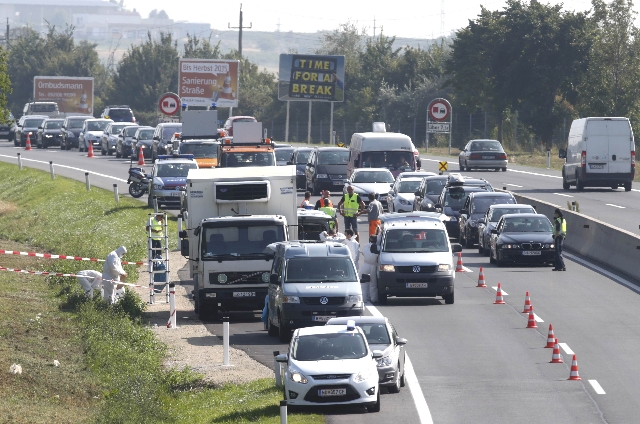 Forensic police officers inspect a parked truck (centre L) in which up to 50 migrants were found dead, on a motorway near Parndorf, Austria August 27, 2015. REUTERS/Heinz-Peter Bader 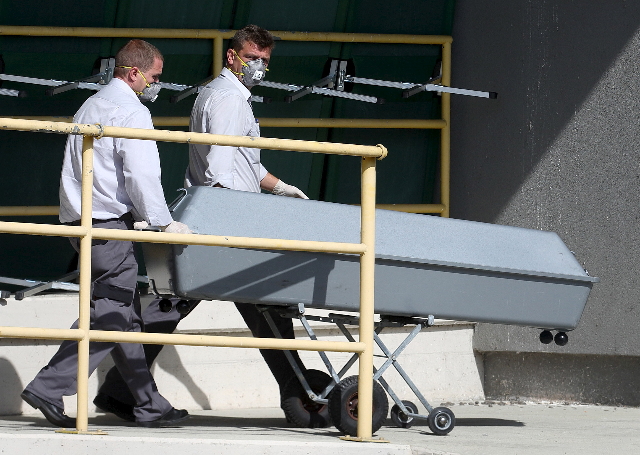 A coffin is rolled onto a truck at a customs building with refrigeration facilities in the village of Nickelsdorf, Austria, August 28, 2015. A truck full of refugees discovered abandoned on an Austrian motorway on Thursday contains more than 70 bodies, the interior ministry said on Friday, announcing an updated death toll. REUTERS/Heinz-Peter Bader 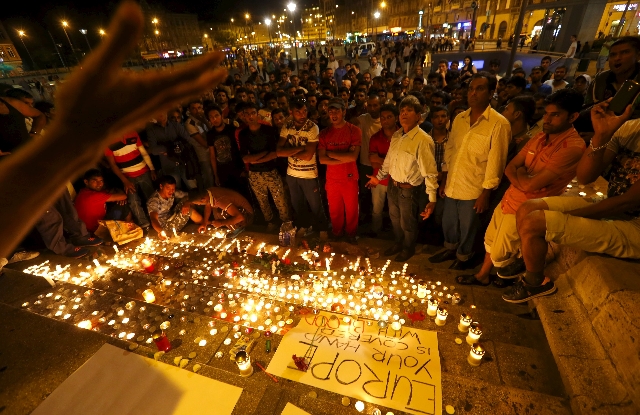 Migrants attend a candle light ceremony at a Budapest railway station in memory of 71 refugees who died in a truck found in Austria, in Budapest, Hungary August 28, 2015. An Austrian motorway patrol on Thursday discovered an abandoned truck containing 71 dead migrants near the Hungarian border on Thursday. More than 100,000 migrants, many from Syria and other conflict zones, have taken the Balkans route into the EU this year via Serbia into Hungary and then heading on to Germany. REUTERS/Laszlo Balogh
Dozens of refugees — most likely fleeing war-ravaged Syria — probably suffocated inside a truck abandoned on an Austrian highway, authorities said Friday.

“We are talking about human trafficking, homicide, even murder,” said Johann Fuchs, state prosecutor of Eisenstadt.

News of the deaths comes as Europe is struggling to deal with a record swell of migrants and refugees traveling by land and sea to find a better life or escape conflict at home in the Middle East and Africa.

United Nations officials have called on European officials to improve their efforts to resolve the growing humanitarian crisis, including dealing with human traffickers preying on refugees of the sort thought to be responsible for the deaths in Austria.

The truck was found Thursday, abandoned on the side of the A4 highway, which links Budapest in Hungary to the Austrian capital, Vienna. When police opened it, they found the bodies decomposing in the heat.

They found a Syrian travel document inside the truck.

“We must assume now that these are refugees,” said Hans Peter Doskozil, police director of Austria’s Burgenland region. “In concrete terms, it is possible this is a Syrian refugee group.”

Hungarian police said Friday they had arrested three Bulgarian citizens and an Afghan citizen in connection with the truck.

“We are likely looking at a Bulgarian-Hungarian people smuggling ring,” Fuchs said.

About 3,000 trucks pass through that area of the highway daily, and checking each one of them is almost impossible, authorities said. Most human smugglers use smaller cars, making the use of trucks unusual.

On Friday, Hungarian police said they arrested a Romanian man who flipped a van carrying 18 refugees. In Surrey, England, authorities said they arrested 27 people suspected of illegally entering the country found in a suspicious truck at a gas station. The driver was also arrested.

In addition to the deaths of refugees trying to cross into Europe by road, thousands are making the perilous journey by sea.

Some 300,000 people have crossed the Mediterranean Sea into Greece and Italy this year alone, according to the office of the United Nations High Commissioner for Refugees. More refugees and migrants arrived in Greece in July alone than did in all of 2014, the agency said.

So far this year, 2,373 people have died trying to reach Europe by sea, according to the International Organization for Migration. In all of 2014, 3,281 people died.

In just one incident this week, 54 people died trying to cross the Mediterranean, the Italian coast guard said.

On Tuesday, a spokeswoman for the United Nations High Commissioner for Human Rights said the agency was calling on European leaders to organize a collective response to the needs of migrants and refugees flooding the continent.

“All European countries and the EU must act together and help those countries whose capacities are already overstretched such as Greece, the former Yugoslav Republic of Macedonia and Serbia,” spokeswoman Melissa Fleming said. “This includes capacity support, and support for equitable redistribution of refugees and asylum seekers across” the European Union.

The deaths in Austria highlight the need for a better strategy, Austrian Interior Minister Johanna Mikl-Leitner said at a news conference Thursday.

“This horrible crime shows that we must get even tougher in the battle against people smuggling,” she said. “People smugglers are criminals and not well-minded helpers. They do not care about the well-being of the refugees, they care about profit.”