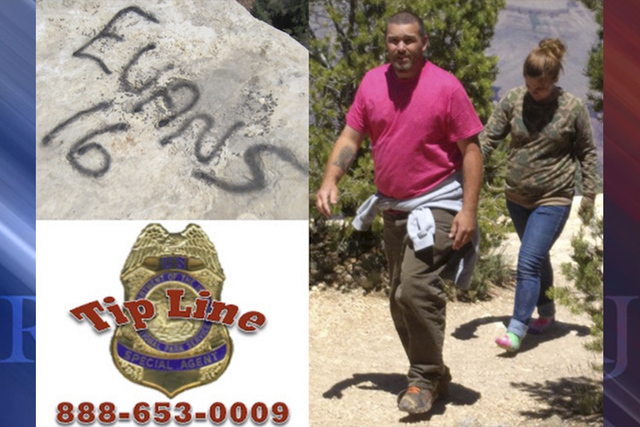 Authorities at the Grand Canyon are looking for whoever vandalized a rock near the Yavapai Point overlook. (NPS Investigative Services Branch)

GRAND CANYON NATIONAL PARK, Ariz. — Authorities at the Grand Canyon are looking for whoever vandalized a rock near the Yavapai Point overlook.

Park spokeswoman Kirby-Lynn Shedlowski says a visitor photographed the rock, and a man and woman walking away from it on May 22.

The rock has an “Evans 16” spray-painted in black.

The man was wearing what appeared to be a reddish-pink T-shirt and brown pants with a gray sweater tied around his waist. The woman had on jeans and a long-sleeve, camouflage-print shirt.

Shedlowski says the rock with graffiti was close to the Yavapai Geology Museum.

Defacing a natural feature is a federal offense that carries jail time and fines.