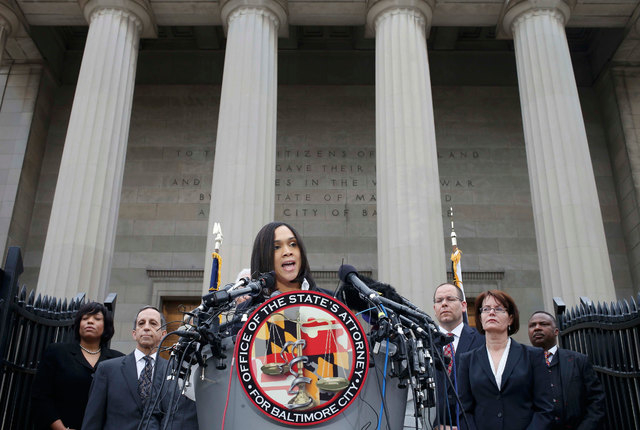 Baltimore state attorney Marilyn Mosby says six Baltimore police officers will be charged in the death of Freddie Gray, the black man who later died of injuries he sustained while in custody, May 1, 2015. (Reuters/Adrees Latif)

Six Baltimore police officers were indicted Thursday on charges connected to the death of Freddie Gray.

The six officers face charges that, if they are convicted, could lead to decades in prison, based on their alleged actions that day. Among them: Illegal arrest, misconduct, assault and involuntary manslaughter.

Officer Caesar R. Goodson Jr., who prosecutors say was driving the van used to transport Gray after his arrest, faces the most charges, and the most severe: second-degree depraved heart murder.

The list of charges in the indictments the grand jury returned differs slightly from charges Mosby announced earlier this month; all six of the officers now face charges of reckless endangerment, and several other allegations have been removed.

“As our investigation has continued, additional information has been discovered, and as is often the case during an ongoing investigation, charges can and should be revised based upon the evidence,” she said.

Mosby didn’t take questions at the press conference and didn’t go into details about what additional evidence had come to light.

The officers are scheduled to be arraigned on July 2, she said.

Mosby’s announcement earlier this month that charges had been filed against the officers brought cheers from protesters and words of protest from the police union.

Attorneys for the officers have called for Mosby to be taken off the case, arguing that she has conflicts of interest — an accusation Mosby denies.

In a statement after the officers’ indictments, the police union called for the community to support police, noting that thousands of men and women in the department protect and serve the city’s neighborhoods

“I look forward to trying this case against Marilyn Mosby herself and proving Alicia White is innocent,” attorney Ivan Bates said.