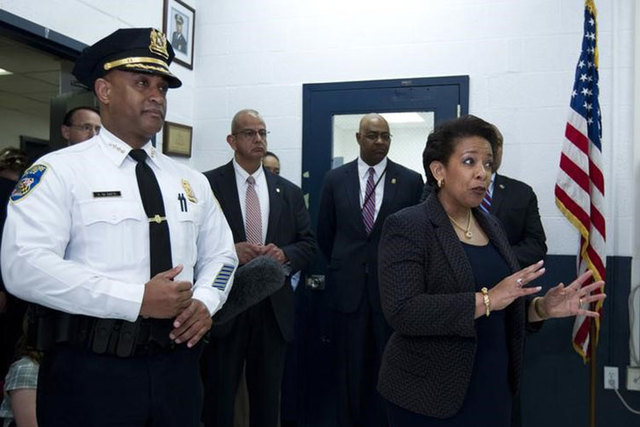 Baltimore Police Commissioner Anthony Batts has been removed from his position as top cop, the mayor announced Wednesday.

Batts drew widespread criticism for his response to riots that erupted after the April death of Freddie Gray, a young black man in police custody. Deputy Police Commissioner Kevin Davis was tapped to be interim commissioner.

“Recent events have placed an intense focus on our police leadership, distracting many from what needs to be our main focus — the fight against crime. So we need a change,” Mayor Stephanie Rawlings-Blake told reporters.

“This was not an easy decision, but it is one that is in the best interest of the people of Baltimore. The people of Baltimore deserve better,” she said. “I hope that we can now get refocused on what is the most important. We cannot continue to have the level of violence that we’ve seen.”

The move came as the city’s police union said in a report that the riots were preventable and fueled by the “passive stance” adopted by Batts and top commanders.

Claiming police brass “put the image of themselves and City Hall ahead of the safety of its citizens and public servants,” the Baltimore City Fraternal Order of Police Lodge 3 released its report on the same day that the law enforcement advocacy group Police Executive Research Forum began its own review of the riot response, as requested by Batts.

City and police officials have repeatedly denied that any stand-down order was given in response to the demonstrations after Gray’s death April 19.

Gray, 25, was arrested on a weapons charge April 12 but suffered a severe spinal cord injury while in police custody that led to his death seven days later. Six police officers have been charged in his death; all have pleaded not guilty.

In his first interview after Gray’s death, Batts told CNN’s Evan Perez that the community lacks trust in law enforcement, and police must acknowledge that “we are part of the problem.”

Batts admitted a series of tactical mistakes as protests erupted that stemmed from a core problem: Police were not prepared for such massive demonstrations — particularly once they turned violent.

In announcing her dismissal of Batts, Rawlings-Blake repeatedly stressed she wants to draw attention away from questions over leadership and back toward the actual work of policing.

She said that Baltimore is experiencing a crime surge.

There were 42 homicides in the city in May, the deadliest month since 1972.

“As we have seen in recent weeks, too many continue to die on our streets, including three just last night, and one lost earlier today,” the mayor said. “Families are tired of feeling this pain, and so am I.”

FOP Lodge 3 President Gene Ryan said in a news conference that the city’s response to the rioting was “politically motivated and uncaring,” CNN affiliate WBAL reported. The union’s review was undertaken because rank-and-file officers “do not want to see Baltimore burn again,” he said.

The 32-page report said officers did not have the proper equipment, training and leadership to respond to the days of unrest that resulted in injuries to more than 200 officers and millions of dollars in property damage. It also said the Police Department’s criminal intelligence section was “severely hampered by the understaffing of trained detectives.”

“Before and during the riots, Police Commissioner Batts and his top commanders adopted a passive stance that put the image of themselves and City Hall ahead of the safety of its citizens and public servants,” the police union report said. “This tentative posture allowed the destruction of personal property and needless injury to first responders. The question begs now, is the Baltimore Police Department prepared for the next potential unrest?”

The Police Department did not immediately respond to a request for comment, but a spokesman for Rawlings-Blake said it was “disappointing that the FOP continues to issue baseless and false information instead of working with us to find solutions that will protect our officers.”

Spokesman Kevin Harris said the city hoped the police union’s review “would shed some additional light on how we can better prepare our officers should there be future unrest. Instead, this report is no more than a trumped up political document full of baseless accusations, finger pointing and personal attacks.”

He promised a city review of the protests would be “extensive, independent and consist of all the facts.”