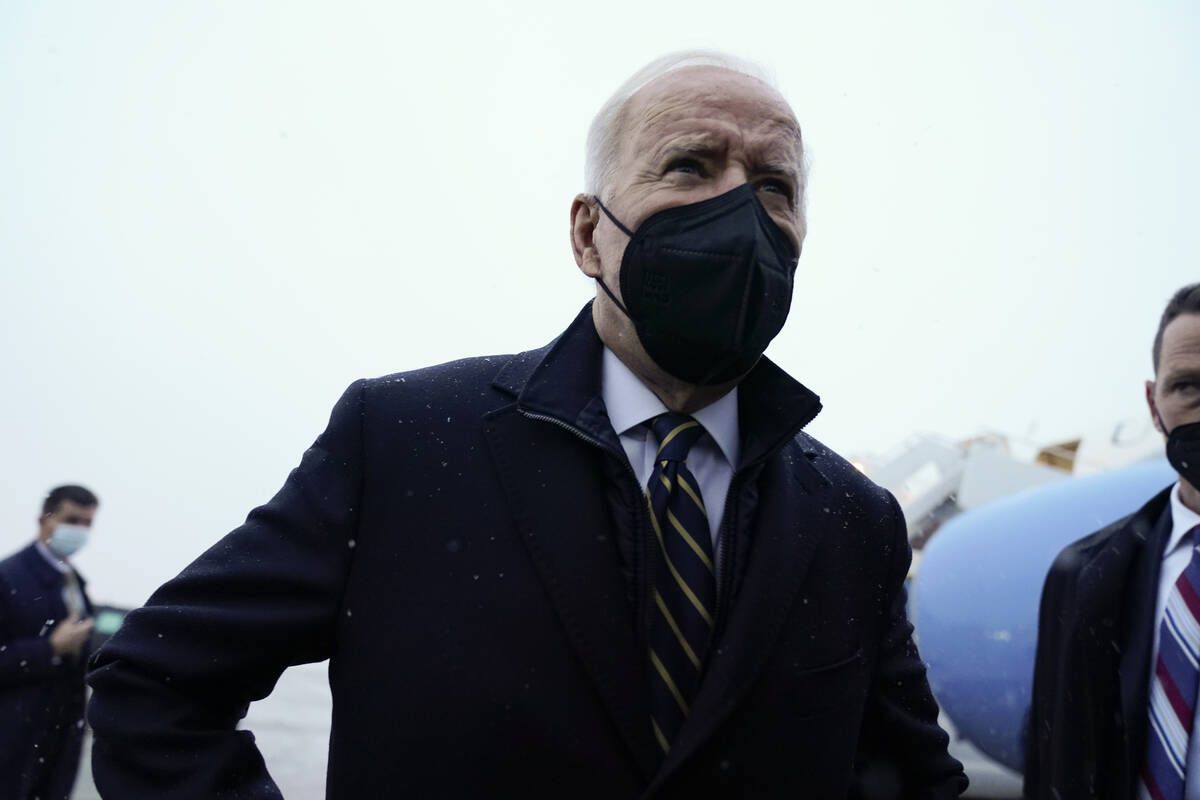 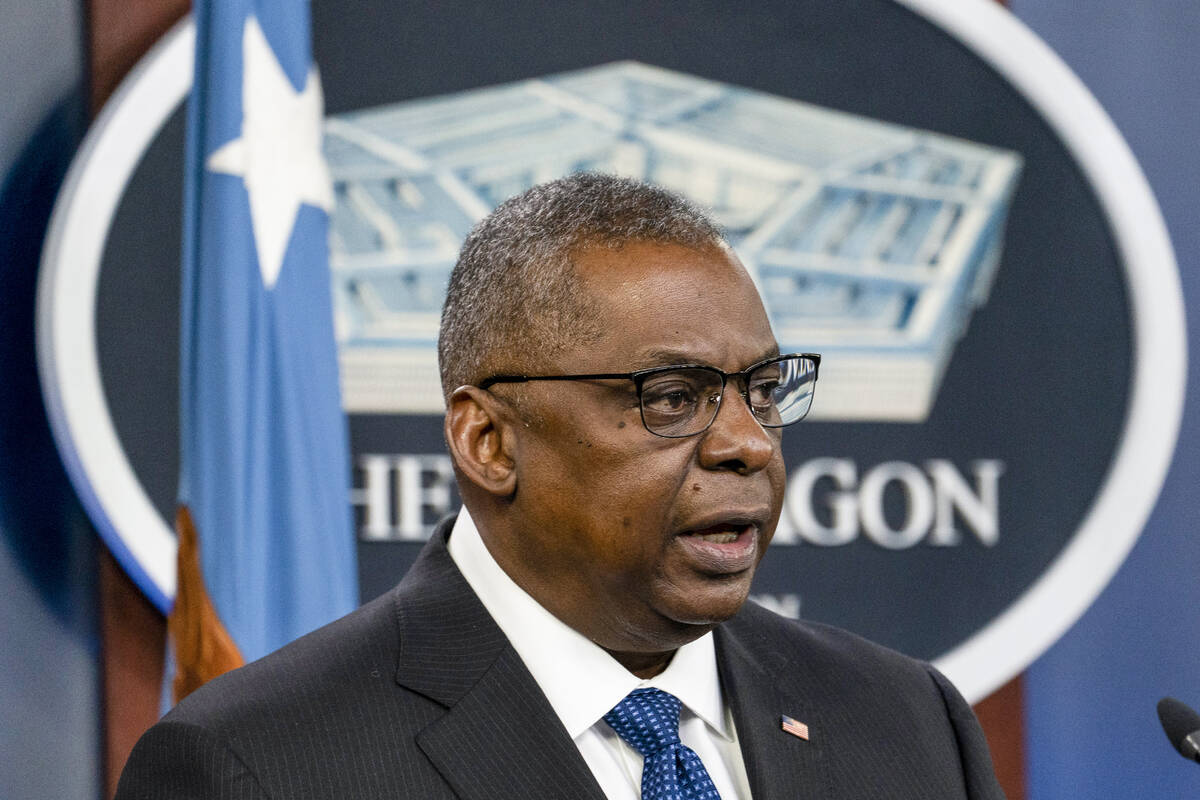 Secretary of Defense Lloyd Austin speaks during a media briefing at the Pentagon, Friday, Jan. 28, 2022, in Washington. (AP Photo/Alex Brandon) 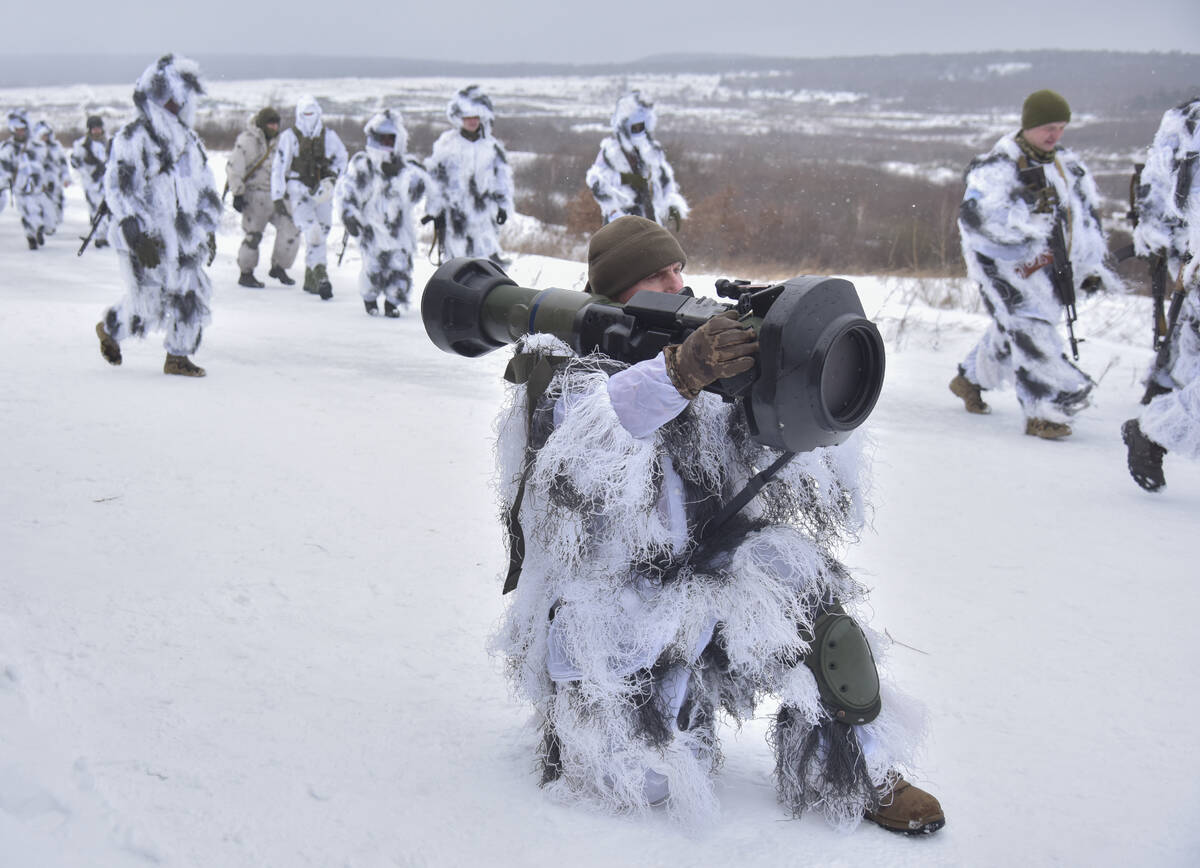 CORRECTS THAT NLAW ARE ANTI-TANK AND NOT ANTI-AIRCRAFT MISSILES - Ukrainian soldiers take part in an exercise for the use of NLAW anti-tank missiles at the Yavoriv military training ground, close to Lviv, western Ukraine, Friday, Jan. 28, 2022. British defense secretary Ben Wallace told the U.K. had already delivered 2,000 NLAWs to Ukraine, a number he indicated might continue to rise. The missiles were London's way of providing defensive aid to Kyiv as Russian forces deploying around Ukraine's borders give the impression a new invasion may be imminent. (AP Photo/Pavlo Palamarchuk) 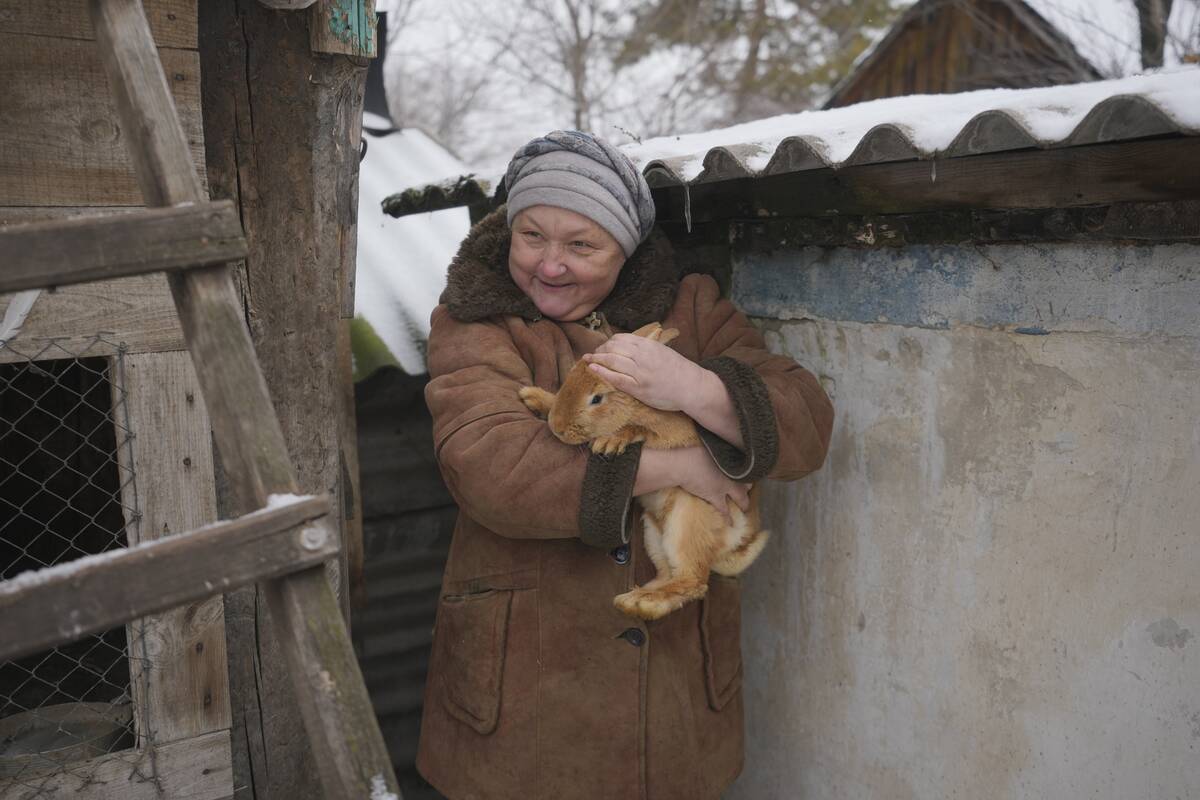 Olga, one of the 16 residents still living in a frontline village, holds a rabbit speaking to journalists at her house's yard not far from the front line in the Luhansk region, eastern Ukraine, Friday, Jan. 28, 2022. High-stakes diplomacy continued on Friday in a bid to avert a war in Eastern Europe. The urgent efforts come as 100,000 Russian troops are massed near Ukraine's border and the Biden administration worries that Russian President Vladimir Putin will mount some sort of invasion within weeks. (AP Photo/Vadim Ghirda) 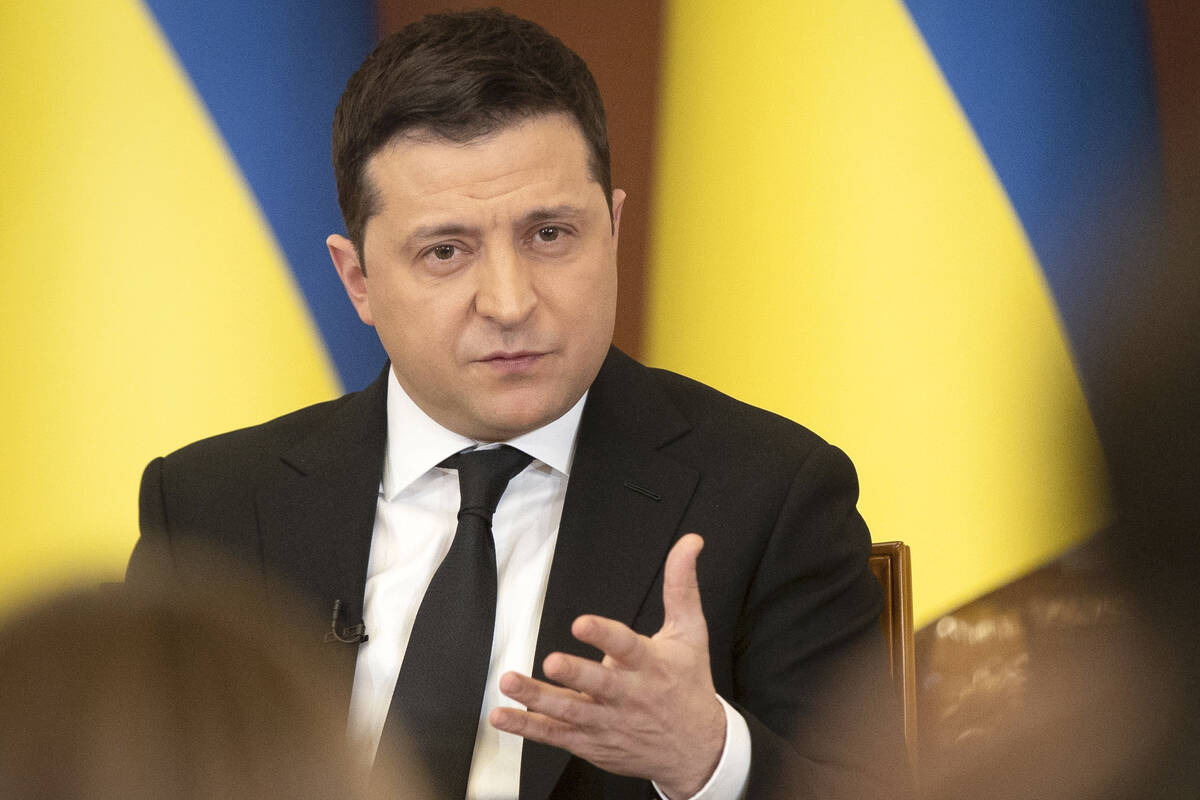 WASHINGTON — President Joe Biden has indicated he may move a limited number of U.S. troops into eastern Europe in response to the buildup of Russian troops on the border with Ukraine.

The U.S. has put 8,500 troops on higher alert for potential deployment to support and reassure NATO allies.

Returning to Washington after a trip Friday to Pennsylvania, Biden was asked if he had decided when he would move U.S. troops to eastern Europe.

“I’ll be moving U.S. troops to eastern Europe and the NATO countries in the near term. Not a lot,” Biden said. Earlier this week Biden said he might move them in the nearer term, “just because it takes time.”

Defense Secretary Lloyd Austin said Friday the buildup of Russian forces along Ukraine’s border has reached the point where President Vladimir Putin now has a complete range of military options, including actions short of a full-scale invasion.

“While we don’t believe that President Putin has made a final decision to use these forces against Ukraine, he clearly now has the capability,” Austin told a Pentagon news conference.

In Moscow, the Kremlin said Putin told French President Emmanuel Macron that the West has failed to take Russian security concerns into account, and Russian Foreign Minister Sergey Lavrov told a radio interviewer that Russia doesn’t want war but sees no room for compromise on its demands.

Austin said Putin could use any portion of his force of an estimated 100,000 troops to seize Ukrainian cities and “significant territories” or to carry out “coercive acts or provocative political acts” like the recognition of breakaway territories inside Ukraine. He urged Putin to de-escalate tensions, and appeared to warn Moscow against what the White House recently said was Russia’s intent to paint Ukraine as the aggressor using a “false-flag operation” to justify an attack.

“We remain focused on Russian disinformation, including the potential creation of pretext for further invasion or strikes on Donbas,” said Austin. “This is straight out of the Russian playbook. They’re not fooling us.”

Shift in US speaking

Austin spoke alongside Army Gen. Mark Milley, chairman of the Joint Chiefs of Staff, in what were their first extensive public comments about the crisis, marking a subtle shift in the administration’s approach to public communications about the escalating situation. While both have consulted regularly with their NATO and Ukrainian counterparts, the public discourse has focused on the diplomatic efforts.

Austin and Milley said the U.S. has taken into account the risk that any troop movements could inflame the situation, but stressed the need for America to reassure its allies. Moving large units with heavy equipment and weapons often requires more time due to travel and logistical challenges.

Milley painted a grim picture of Russian military capabilities around Ukraine, saying there are not only ground troops and naval and air forces but also cyber and electronic warfare capabilities, as well as special operations forces. He said the buildup is the largest he’s seen in recent memory, and he urged Putin to choose a diplomatic path over conflict.

“If Russia chooses to invade Ukraine, it will not be cost-free, in terms of casualties and other significant effects,” Milley said. He was referring to Russian costs, while also noting that Ukraine’s armed forces are more capable today than in 2014, when Russia seized Ukraine’s Crimean Peninsula and intervened in support of pro-Russian separatists in the eastern industrial heartland.

Earlier Friday, the Kremlin said Putin told Macron that the West has failed to consider Russia’s key conditions of halting further NATO expansion, stopping the deployment of alliance weapons near Russian borders, and rolling back its forces from Eastern Europe.

The U.S. and NATO formally rejected those demands this week, although Washington outlined areas where discussions are possible, offering hope that there could be a way to avoid war.

Despite that, U.S. President Joe Biden on Thursday warned Ukrainian President Volodymyr Zelenskyy that there is a “distinct possibility” that Russia could take military action against the former Soviet state in February. Russia has repeatedly denied having any such plans.

Zelenskyy sought to play down the war fears, saying Western alarm over an imminent invasion has prompted many investors in the country’s financial markets to cash out.

“We don’t need this panic,” he said at a news conference. “It cost Ukrainians dearly.”

Putin told Macron that Moscow will study the U.S. and NATO response before deciding its next move, according to a Kremlin account of their call. The Russian president has made no public remarks about the Western response, but Lavrov said it leaves little chance for reaching agreement.

“While they say they won’t change their positions, we won’t change ours,” Lavrov told Russian radio stations in a live interview. “I don’t see any room for compromise here.”

“There won’t be a war as far as it depends on the Russian Federation, we don’t want a war,” he added. “But we won’t let our interests be rudely trampled on and ignored.”

Words need to be backed by action, US says

A senior Biden administration official said the U.S. welcomed Lavrov’s comments that Russia does not want war, “but this needs to be backed up with action. We need to see Russia pulling some of the troops that they have deployed away from the Ukrainian border and taking other de-escalatory steps.” The official spoke on condition of anonymity because he was not authorized to talk publicly.

Lavrov said the U.S. suggested the two sides could talk about limits on the deployment of intermediate-range missiles, restrictions on military drills and rules to prevent accidents between warships and aircraft. He said the Russians proposed discussing those issues years ago, but Washington and its allies never took them up on it until now.

He also said those issues are secondary to Russia’s main concerns about NATO. He said international agreements say the security of one nation must not come at the expense of others, and said he would send letters to ask his Western counterparts to explain their failure to respect that pledge.

Washington has warned Moscow of devastating sanctions if it invades Ukraine, including penalties targeting top Russian officials and key economic sectors. Lavrov said Moscow had warned Washington that sanctions would amount to a complete severing of ties.

NATO, meanwhile, said it was bolstering its deterrence in the Baltic Sea region.

Russia has launched military drills involving motorized infantry and artillery units in southwestern Russia, warplanes in Kaliningrad on the Baltic Sea, and dozens of warships in the Black Sea and the Arctic. Russian troops are also in Belarus for joint drills, raising Western fears that Moscow could stage an attack on Ukraine from the north. The Ukrainian capital is just 75 kilometers (50 miles) from the border with Belarus.

Belarusian President Alexander Lukashenko said there will be no war unless Belarus or Russia come under attack and he accused the West of trying to “drown our Slavic brotherhood in blood.”

Despite the alarming rhetoric, Ukrainian officials have repeatedly tried to project calm.

Zelenskyy said the decision by the U.S., Britain, Australia, Germany and Canada to withdraw some of their diplomats and dependents from Kyiv was a “mistake,” and said internal destabilization poses the greatest risk to his country.

He also bemoaned NATO’s failure to offer Ukraine a roadmap to membership, saying the alliance should state clearly if it doesn’t plan to embrace Ukraine and not offer vague promises.

Zelenskyy also challenged U.S. warnings of an imminent Russian attack, insisting “we aren’t seeing any escalation bigger than before.” He said the Russian buildup could be part of Moscow’s attempts to exert “psychological pressure” and sow panic.

Ukrainian Defense Minister Oleksii Reznikov told parliament the number of Russian troops near Ukraine — about 130,000 — is comparable to Moscow’s military buildup last spring, when Moscow eventually pulled its forces back after major exercises.