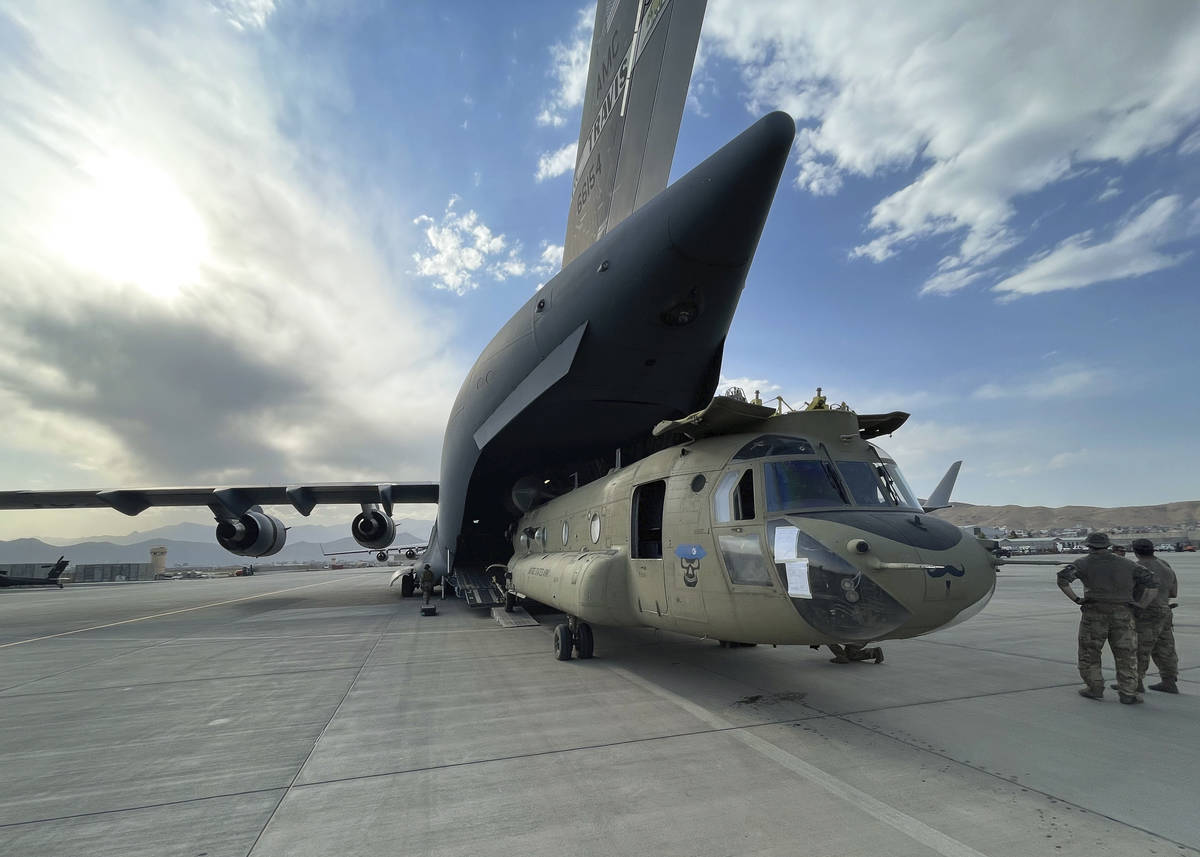 In this image provided by the Department of Defense, a CH-47 Chinook from the 82nd Combat Aviation Brigade, 82nd Airborne Division is loaded onto a U.S. Air Force C-17 Globemaster III at Hamid Karzai International Airport in Kabul, Afghanistan, Saturday, Aug, 28, 2021. (Department of Defense via AP) 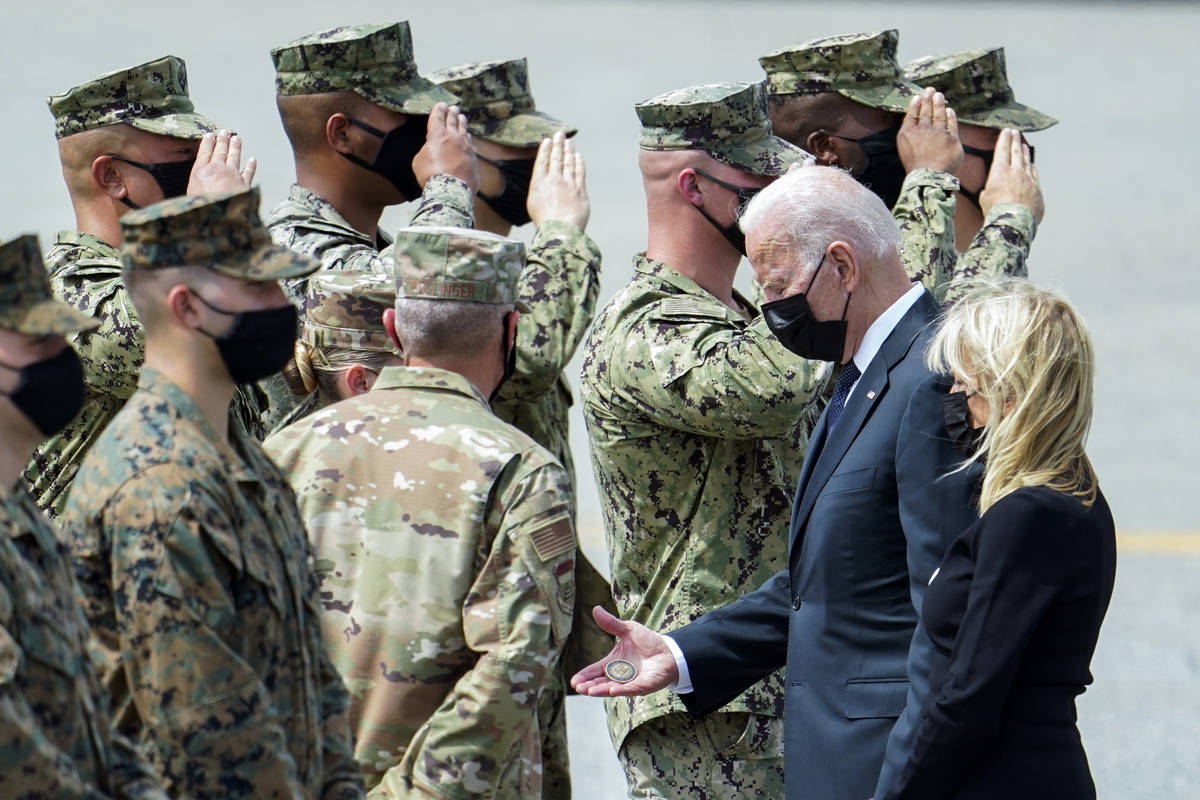 President Joe Biden holds a presidential challenge coin as he speaks with Air Force Mortuary Affairs Operations Air Force Col. Chip Hollinger and others after participating in a casualty return Sunday, Aug. 29, 2021, at Dover Air Force Base. Biden embarked on a solemn journey Sunday to honor and mourn the 13 U.S. troops killed in the suicide attack near the Kabul airport as their remains return to U.S. soil from Afghanistan. First lady Jill Biden is at right. (AP Photo/Manuel Balce Ceneta) 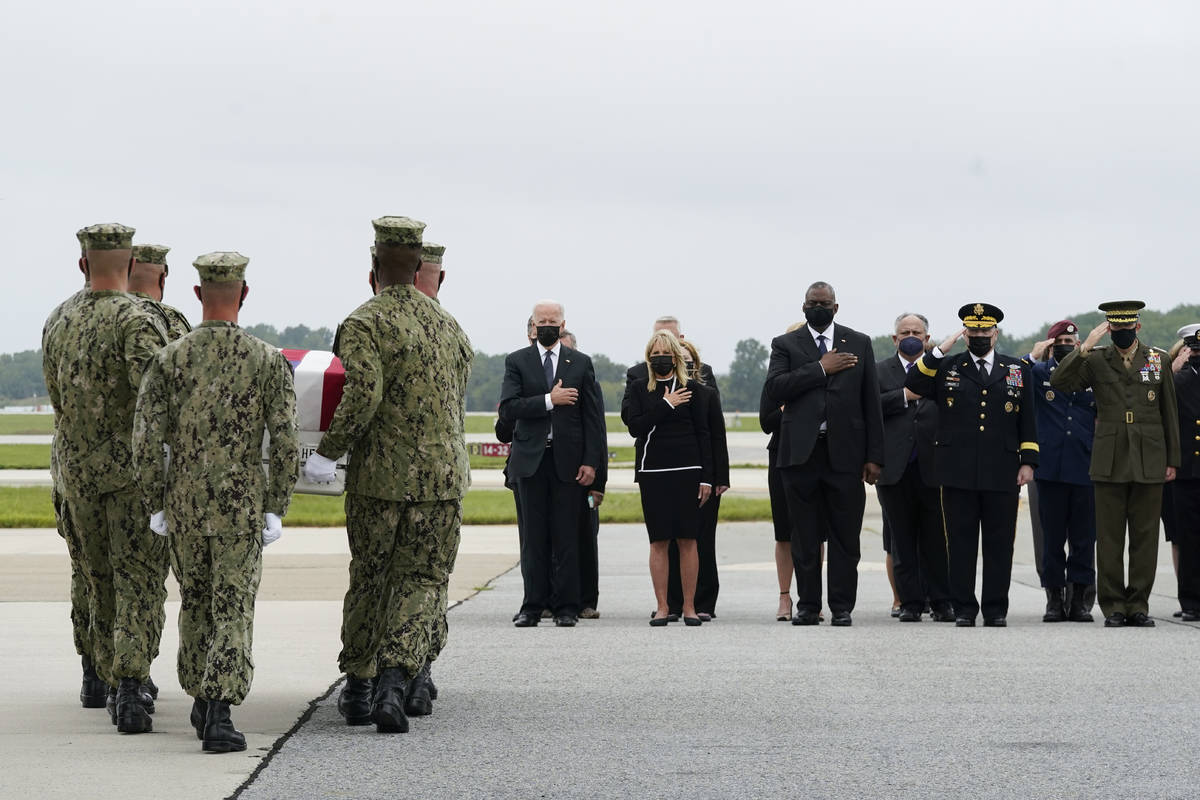 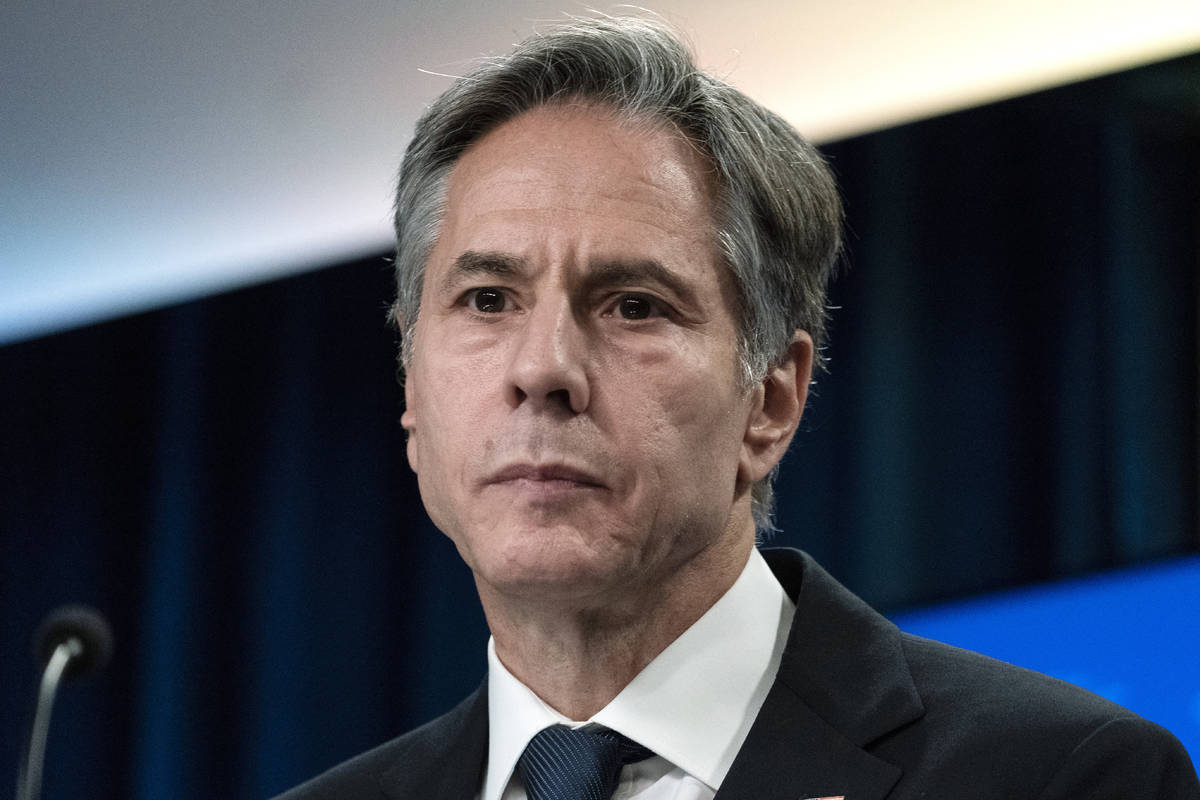 Secretary of State Antony Blinken listens to a question while speaking about Afghanistan during a media briefing at the State Department, Wednesday, Aug. 25, 2021, in Washington. (AP Photo/Alex Brandon, Pool) 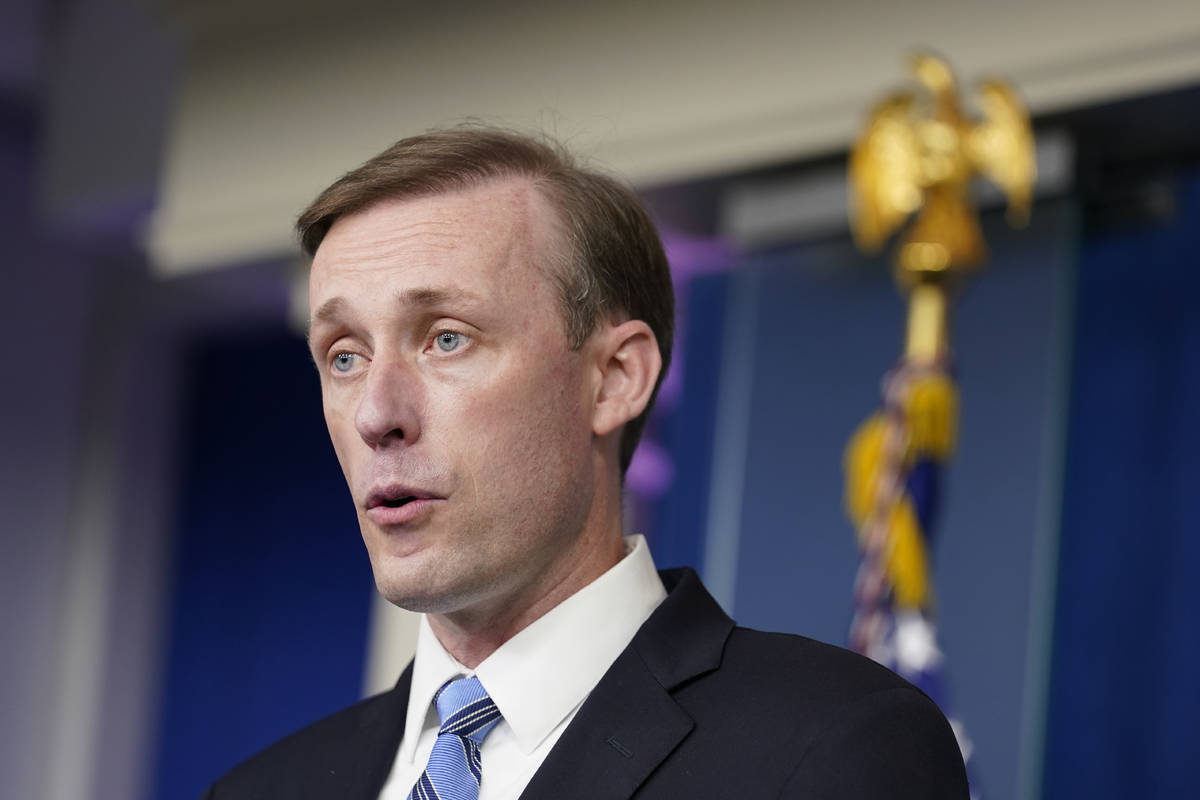 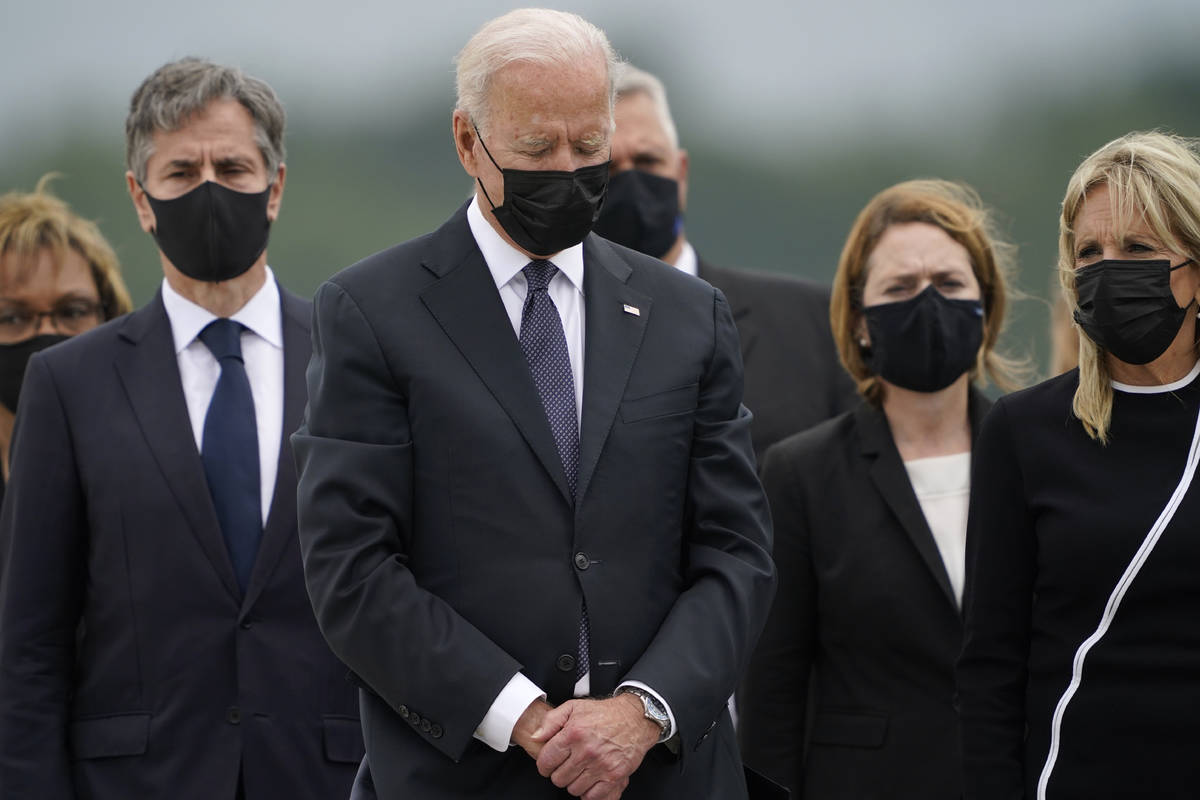 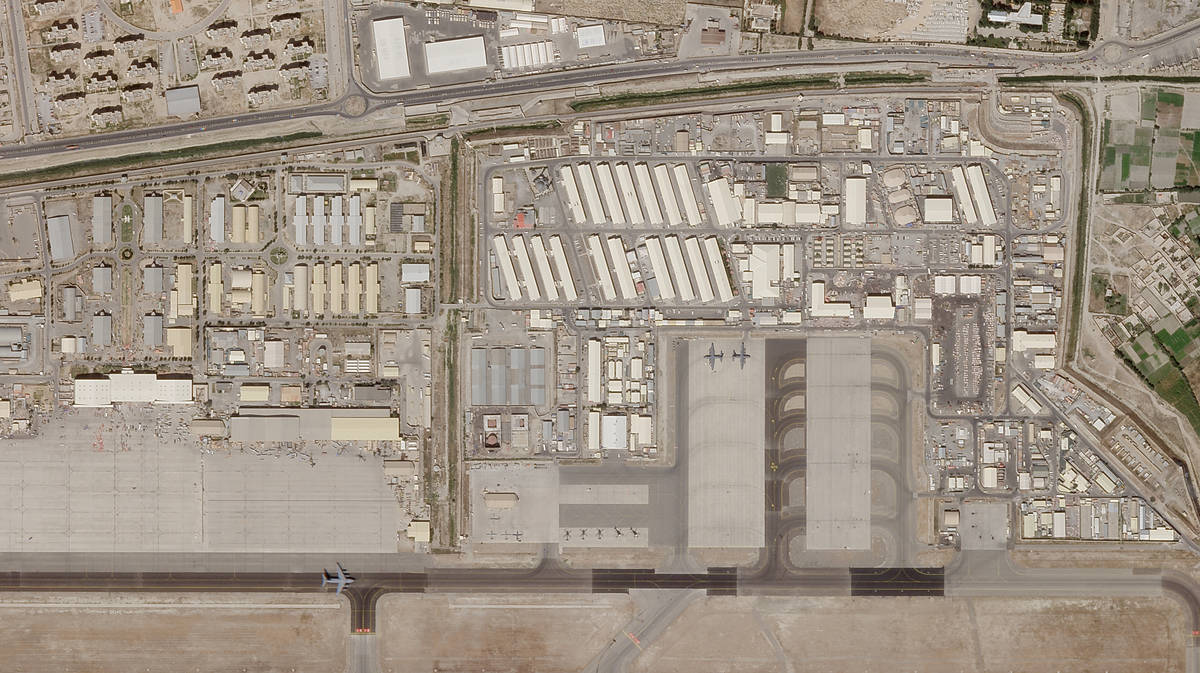 In this satellite photo taken by Planet Labs Inc., the military side of Kabul's international airport is seen as a military flight taxing on the tarmac Saturday, Aug. 28, 2021. Taliban forces sealed off Kabul's airport Saturday to most Afghans hoping for evacuation, as the U.S. and its allies were ending a chaotic airlift that will end their troops' two decades in Afghanistan. (Planet Labs Inc. via AP)

WASHINGTON — Addressing the nation, a defensive President Joe Biden on Tuesday called the U.S. airlift to extract more than 120,000 Afghans, Americans and other allies to end a 20-year war an “extraordinary success,” though more than 100 Americans and thousands of Afghans remain behind.

Twenty-four hours after the last American C-17 cargo plane roared off from Kabul, Biden vigorously defended his decision to end America’s longest war and withdraw all U.S. troops ahead of an Aug. 31 deadline.

Biden has faced tough questions about the way the U.S. went about leaving Afghanistan — a chaotic evacuation with spasms of violence including a suicide bombing last week that killed 13 American service members and 169 Afghans.

He is under heavy criticism, particularly from Republicans, for his handling of the evacuation. But he said it was inevitable that the final departure from two decades of war, first negotiated with the Taliban for May 1 by former President Donald Trump, would have been difficult with likely violence, no matter when it was planned and conducted.

“To those asking for a third decade of war in Afghanistan, I ask, ‘What is the vital national interest?’” Biden said. He added, “I simply do not believe that the safety and security of America is enhanced by continuing to deploy thousands of American troops and spending billions of dollars in Afghanistan.”

Asked after the speech about Biden sounding angry at some criticism, White House press secretary Jen Psaki said that the president had offered his “forceful assessment.”

In addition to all the questions at home, Biden is also adjusting to a new relationship with the Taliban, the Islamist militant group that the U.S. toppled after the Sept. 11, 2001, attacks, and that is now once again in power in Afghanistan.

The last Air Force transport plane departed Kabul one minute before midnight Monday, raising questions about why Biden didn’t continue the airlift for at least another day. He had set Tuesday as a deadline for ending the evacuation and pulling out remaining troops after the Taliban took over the country.

In a written statement Monday, Biden said military commanders unanimously favored ending the airlift instead of extending it. He said he asked Secretary of State Antony Blinken to coordinate with international partners to hold the Taliban to their promise of safe passage for Americans and others who want to leave in the days ahead.

“We don’t take them by their word alone, but by their actions,” Biden said. “We have leverage to make sure those commitments are met.”

Blinken put the number of Americans still in Afghanistan at under 200, “likely closer to 100,” and said the State Department would keep working to get them out. He said the U.S. diplomatic presence would shift to Doha, Qatar.

Biden repeated his argument that ending the Afghanistan war was a crucial step for recalibrating American foreign policy toward growing challenges posed by China and Russia — and counterterrorism concerns that pose a more potent threat to the U.S.

“There’s nothing China or Russia would rather have, want more in this competition, than the United States to be bogged down another decade in Afghanistan,” he said

The closing hours of the evacuation were marked by extraordinary drama. American troops faced the daunting task of getting final evacuees onto planes while also getting themselves and some of their equipment out, even as they monitored repeated threats — and at least two actual attacks — by the Islamic State group’s Afghanistan affiliate.

The final pullout fulfilled Biden’s pledge to end what he called a “forever war” that began in response to the 9/11 attacks that killed nearly 3,000 people in New York, Washington and rural Pennsylvania. His decision, and Trump’s, came amid a national weariness of the Afghanistan conflict.

In Biden’s view the war could have ended 10 years ago with the U.S. killing of Osama bin Laden, whose al-Qaida extremist network planned and executed the 9/11 plot from an Afghanistan sanctuary. Al-Qaida has been vastly diminished, preventing it thus far from again attacking the United States. He lamented an estimated $2 trillion of taxpayer money that was spent fighting the war.

“What have we lost as a consequence in terms of opportunities?” Biden asked.

Congressional committees, whose interest in the war waned over the years, are expected to hold public hearings on what went wrong in the final months of the U.S. withdrawal. Why, for example, did the administration not begin earlier the evacuation of American citizens as well as Afghans who had helped the U.S. war effort?

House Minority Leader Kevin McCarthy, R-Calif., on Tuesday described the Biden administration’s handling of the evacuation as “probably the biggest failure in American government on a military stage in my lifetime” and promised that Republicans would press the White House for answers on what went wrong.

“We can never make this mistake again,” McCarthy said.

A group of Republican lawmakers gathered on the House floor on Tuesday morning and participated in a moment of silence for the 13 service members who were killed in the suicide bomber attack.

They also sought a House vote on legislation from Rep. Mike Gallagher, R-Wis., which among other things, would require the administration to submit a report on how many Americans remain in Afghanistan as well as the number of Afghans who had applied for a category of visas reserved for those employed by or on behalf of the U.S. government.

The GOP lawmakers objected as Rep. Debbie Dingell, D-Mich., gaveled the House into adjournment and then gathered for a press conference to denounce the administration.

Biden scoffed at Republicans — and some Democrats — who contend the U.S. would have been better served maintaining a small military footprint in Afghanistan. Before Thursday’s attack, the U.S. military had not suffered a combat casualty since February 2020 — around the time the Trump administration brokered its deal with the Taliban to end the war by May of this year.

Biden said breaking the Trump deal would have restarted a shooting war. He said those who favor remaining at war also fail to recognize the weight of deployment has come with a scourge of PTSD, financial struggles, divorce and other problems for U.S. troops

“When I hear that we could’ve, should’ve continued the so-called low-grade effort in Afghanistan at low risk to our service members, at low cost, I don’t think enough people understand how much we’ve asked of the 1% of this country to put that uniform on,” Biden said. 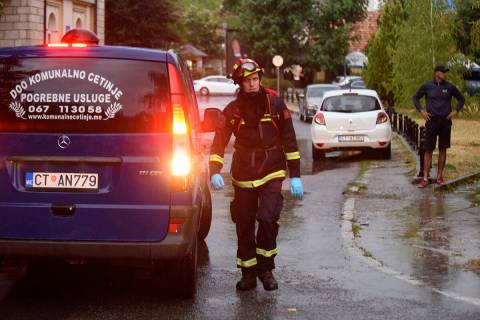