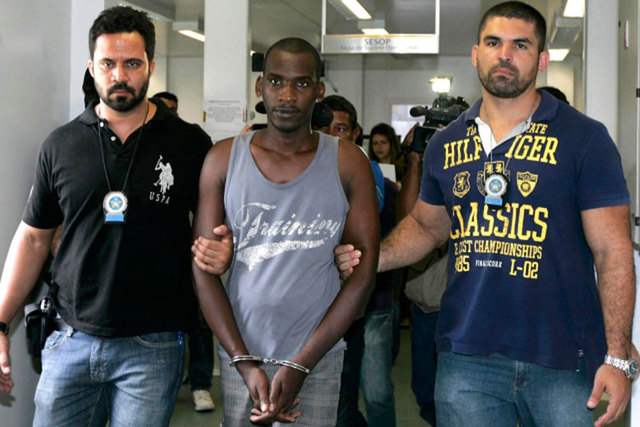 Sailson Jose das Gracas, 26, center, is escorted by policemen at a police station in Nova Iguacu near Rio de Janeiro, Thursday, Dec. 11, 2014. Gracas, who was arrested on Wednesday, told reporters at a police station in the state of Rio that he killed for pleasure and the accompanying adrenaline rush. (Reuters/Fabio Golcalves/Agencia O Dia)

A Brazilian man has confessed to killing 39 women in the Rio de Janeiro region, police said Thursday — shocking claims that, if confirmed, would make him one of the most prolific serial killers in the country’s history.

In an interview with Brazilian broadcaster TV Globo, the alleged killer, Sailson Jose das Gracas, said that he carried out the first slaying when he was 17 and continued to kill over the next decade.

“I started robbing purses and small things like that,” he told TV Globo. “And as I got older, I started having a different thoughts. My thoughts started changing. From stealing, I started thinking about killing.”

Sailson, reported to be 26-years-old, said he didn’t kill impulsively but stalked his victims.

Rio police said they arrested Sailson on Wednesday on suspicion of killing a woman in the suburb of Nova Iguacu. He confessed to that homicide and then told police about the other killings, they said.

Sailson described his need to kill as pathological.

“When I didn’t kill, I would get nervous,” he told TV Globo. “I would pace around the house, and then when I killed, it calmed me.”

Police chief Marcelo Machado told TV Globo that Sailson is also suspected of killing a 2-year-old boy, the son of one of the dead women.

Specialized police teams are carrying out an investigation into his claims.

“We must carefully examine, one by one,” Machado said.

Police said they had located four other cases from the homicide division that had the same modus operandi presented by Sailson, who told them he used knives to kill.

Police said they had also arrested a man and woman, who Sailson said had told him to kill the latest victim.

The self-declared killer said he had “no regrets” about his actions and would kill again if set free.