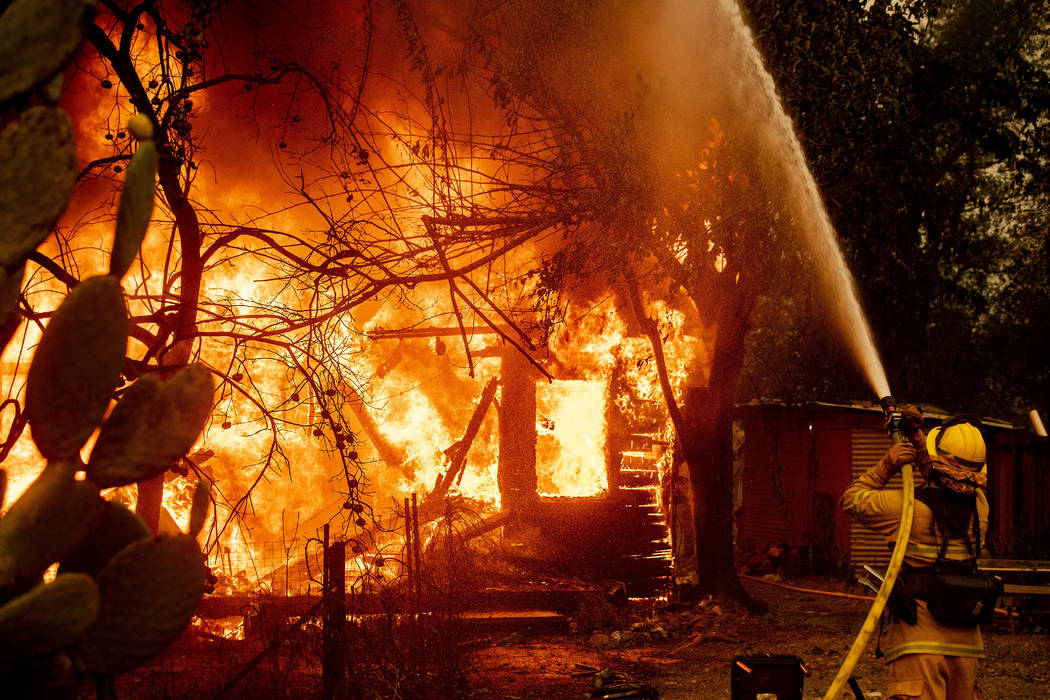 A firefighter sprays water on a burning home as the Kincade Fire burns through the Jimtown community of unincorporated Sonoma County, Calif., on Thursday, Oct. 24, 2019. (AP Photo/Noah Berger) 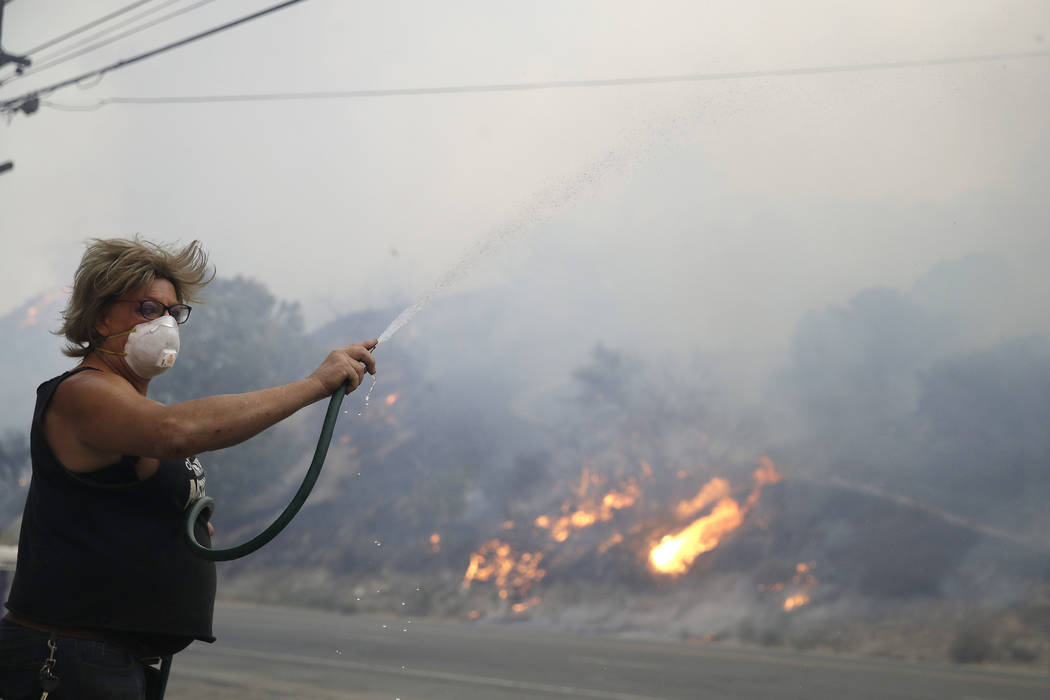 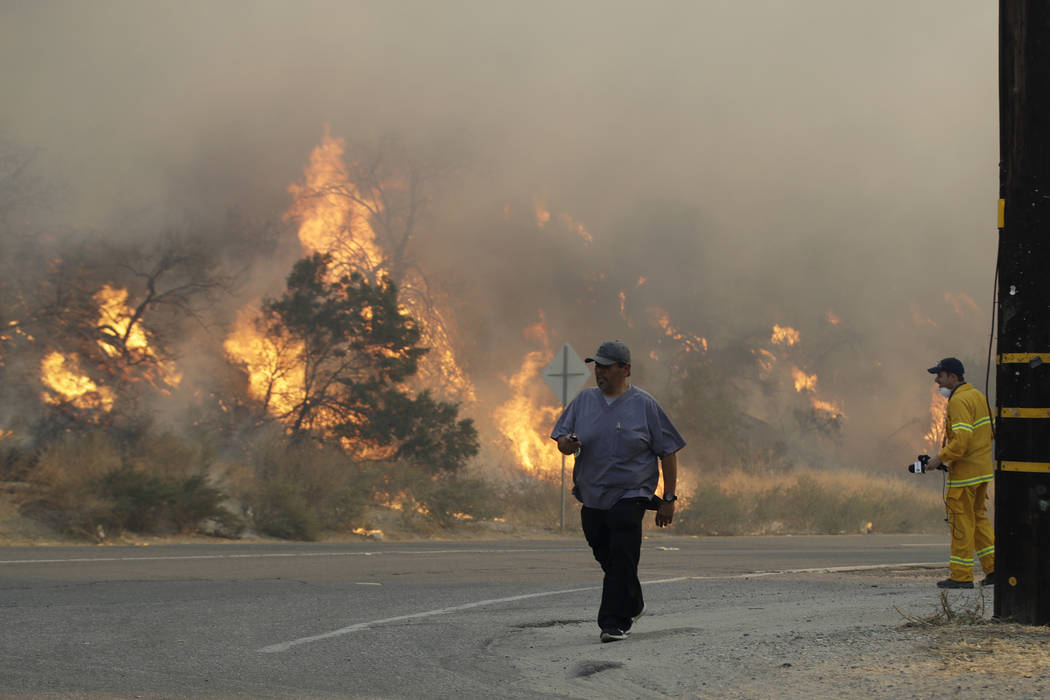 A man walks along Sierra Highway as flames from a wildfire overtake a hillside Thursday, Oct. 24, 2019, in Santa Clarita, Calif. The flames are fed by dry winds that are predicted to strengthen throughout the day across the region. (AP Photo/Marcio Jose Sanchez) 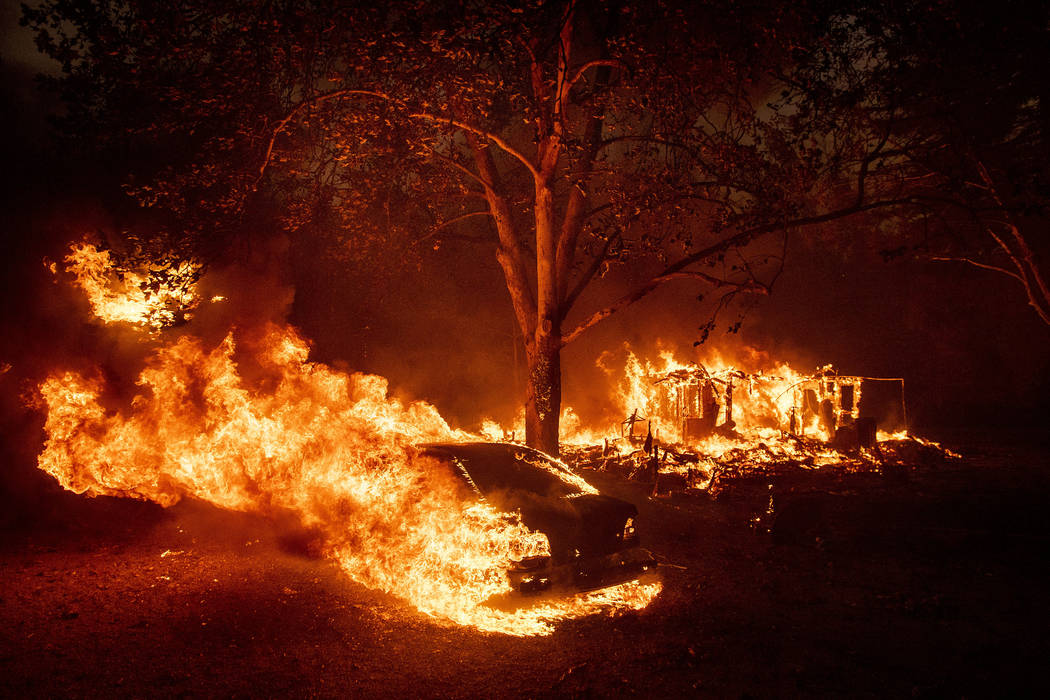 Flames from the Kincade Fire consume a home and car in the Jimtown community of unincorporated Sonoma County, Calif., on Thursday, Oct. 24, 2019. (AP Photo/Noah Berger) 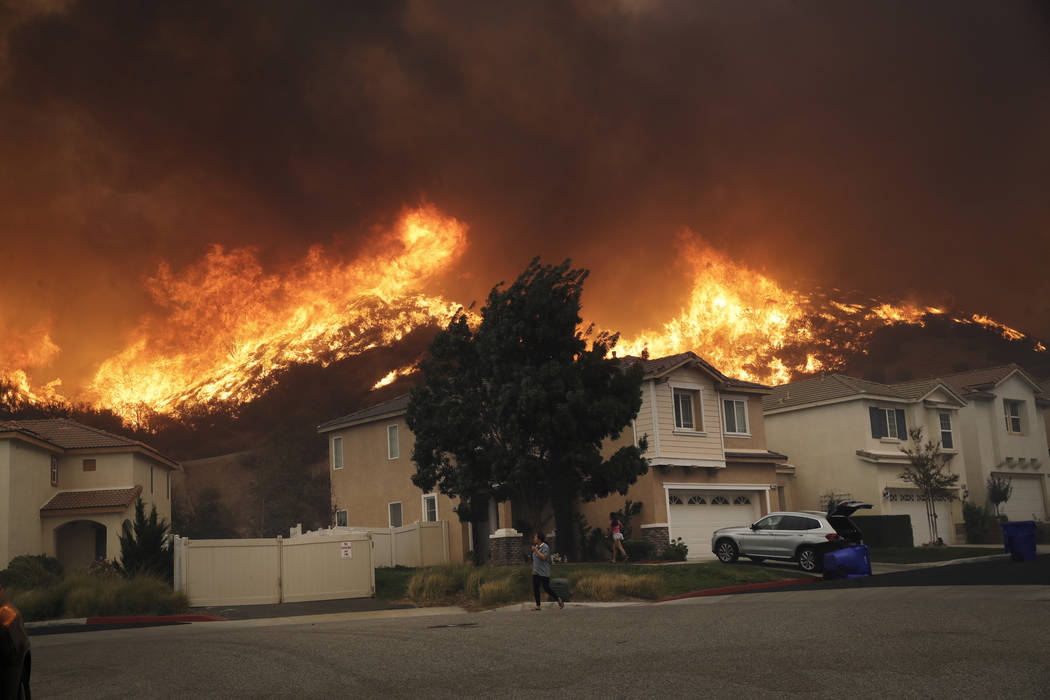 GEYSERVILLE, Calif. — Fast-growing fires throughout California forced tens of thousands of people to evacuate their homes Thursday as dry winds and high heat fed flames and fears in the state still jittery from devastating wildfires in the past two years.

The dramatic fires and evacuations — near Los Angeles and in the wine country of Northern California — came against a backdrop of power shutoffs that utility companies said were necessary to stop high winds from toppling trees or blowing debris into power lines and starting fires.

The state’s largest utility, Pacific Gas & Electric Co., warned that more widespread blackouts this weekend were expected to shut power across much of the San Francisco Bay Area. It would be the third major outage this month.

Officials said they did not yet know how many homes had burned in the state, and that no immediate injuries were reported. It is not clear how any of the blazes began.

In Southern California, two fires rolled along the parched foothills north of Los Angeles, forcing at least 40,000 people to flee neighborhoods where thousands of homes have sprung up in recent decades.

At least six homes burned as the blazes swept through dry brush to the edge of communities in the Santa Clarita area. Winds gusting to about 40 mph (65 kph) pushed the flames, and enormous plumes of smoke were visible for miles. People used hoses to try to protect their properties.

In Northern California wine country, authorities ordered 2,000 people to evacuate as a wildfire burned 49 buildings and exploded to 25 square miles (65 square kilometers), whipped up by the strong winds that had prompted PG&E to impose blackouts across the region. It was 5 percent contained.

The outages affected half a million people or nearly 180,000 customers in 17 counties, most of whom lost power Wednesday afternoon and had it restored by Thursday evening, PG&E official Keith Stephens said.

PG&E CEO Bill Johnson said it was too soon to know if the faulty equipment started the fire outside Geyserville. He said the tower was 43 years old, which is not uncommon in the industry, and had been inspected four times in the past two years and appeared to have been in “excellent condition.”

Officials ordered an evacuation of Geyserville, home to about 900 people and a popular stop for wine country tourists, along with nearby residents. The blaze threatened some of the area’s famed wineries and the River Rock Casino as flames raged on the outskirts of town.

A series of deadly blazes tore through the same area in Northern California wine country two years ago, killing 44 people.

Among those fleeing Geyserville was 81-year-old Harry Bosworth, who awoke before sunrise to find a firetruck and firefighters in his driveway. As he and his wife drove off, flames surrounded their driveway and their barn caught fire.

“I could see the fire coming, so we got the heck out of there,” Bosworth said after escaping to his daughter’s house in the neighboring town of Healdsburg.

Julia Jackson of Geyserville-based Jackson Family Wines, which owns more than 40 wine labels and thousands of acres of vineyards, posted on Instagram that her home was “burnt down to the ground.”

“Stuff is just stuff. Thank God I’m alive,” she wrote. Jackson, who founded a climate change conference, said such fires are why she is doing the work.

It was fueled overnight by 76 mph (112 kph) winds in rugged terrain that was hard to reach, he said. Some people were refusing to leave despite the danger, Sonoma County Sheriff Mark Essick said.

“Please heed our evacuation order,” he said in a televised news conference. “We really need to be able to fight the fire, rather than worrying about rescuing you.”

The fire raged amid rolling blackouts instituted after utility electrical equipment was blamed for setting several blazes in recent years that killed scores of people and burned thousands of homes.

Forecasts for the weekend showed possible wind gusts of up to 80 mph, prompting PG&E officials to warn of more shutdowns, likely starting Saturday for most of the San Francisco Bay Area, excluding the city itself.

Johnson, the PG&E CEO, said it was too soon to put a duration on the weekend outages but local officials reported they had already been notified of shutoffs expected to last from 10 p.m. Saturday to noon Monday

PG&E filed for bankruptcy protection in January as it faced billions of dollars in damages from such wildfires. The investor-owned energy company has set aside billions for insurers and wildfire victims while facing a public backlash over its handling of the outages.