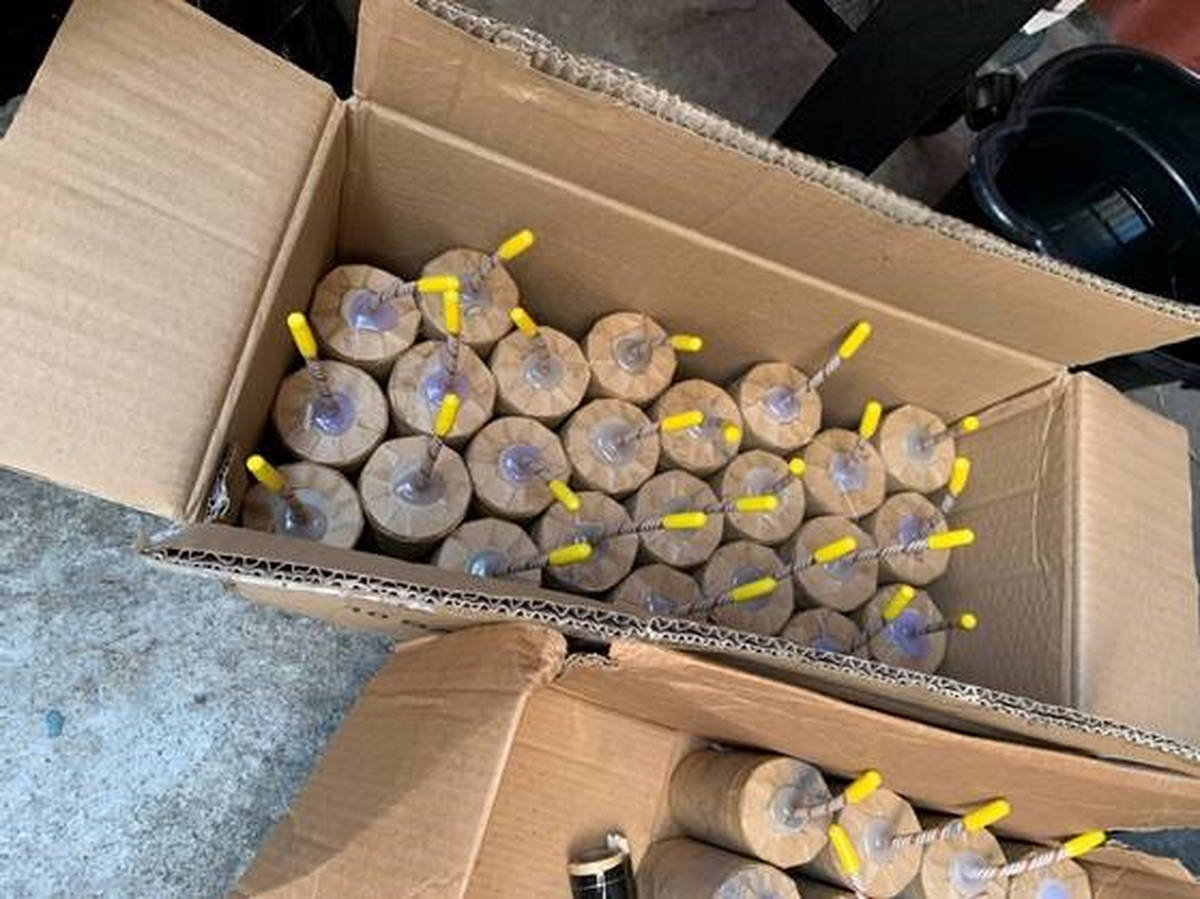 This July 2021 photo released by the ATF/United States Attorney's Office Central District of California, shows boxes with illegal large homemade fireworks explosives in South Los Angeles. A 27-year-old man was charged Saturday, July 3, 2021 with illegally transporting tons of explosives he purchased in Nevada — including several that left a trail of destruction and injuries after they blew up in a Los Angeles neighborhood. Arturo Ceja III faces the federal charges, according to the U.S. Attorney's office in Los Angeles. (ATF/United States Attorney's Office Central District of California via AP). 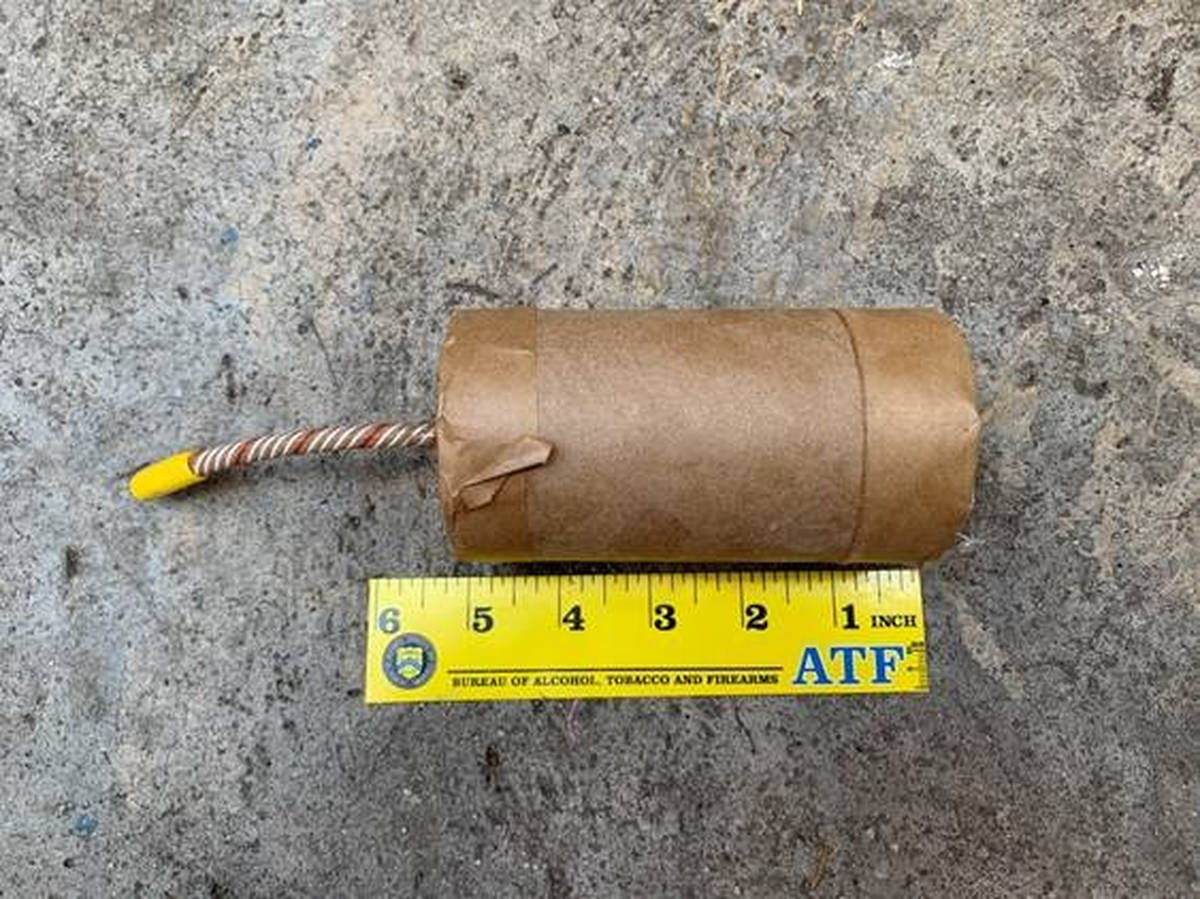 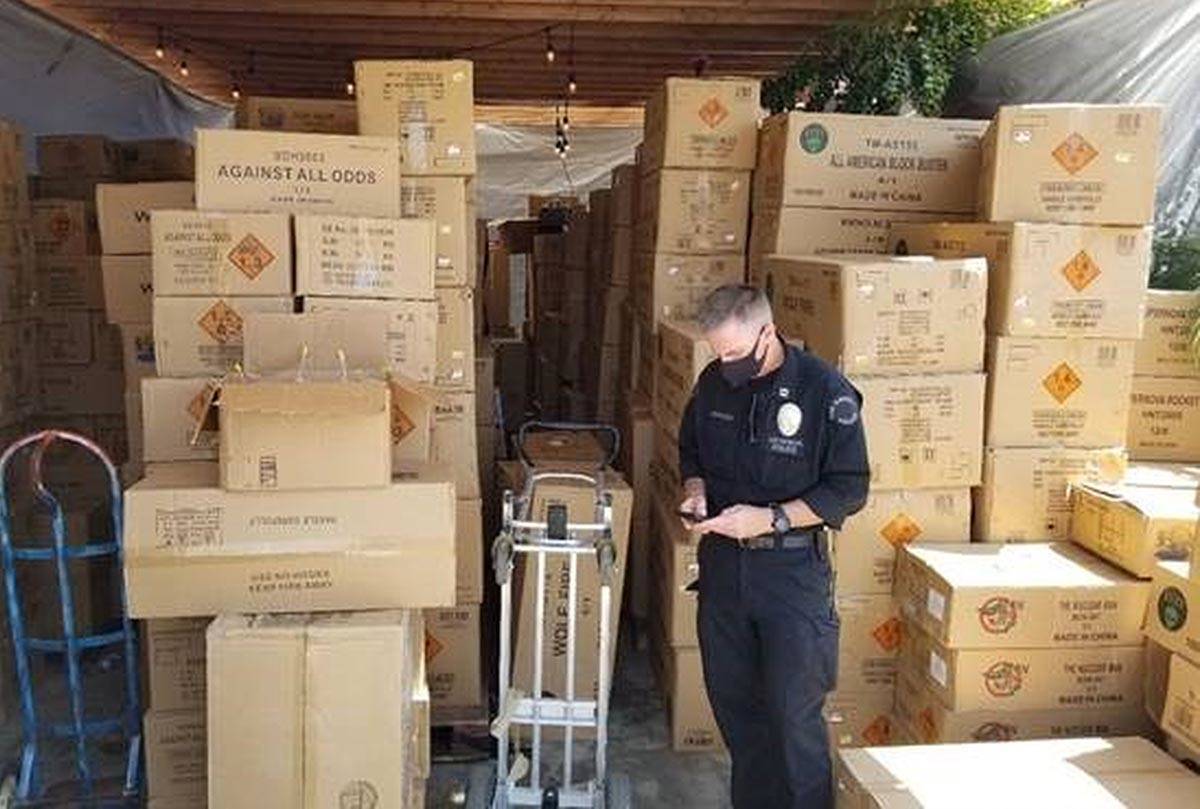 This July 2021 photo released by the ATF/United States Attorney's Office Central District of California, shows boxes of illegal large homemade fireworks explosives in South Los Angeles. Authorities found over 500 boxes of commercial grade fireworks in large cardboard boxes. A 27-year-old man was charged Saturday, July 3, 2021 with illegally transporting tons of explosives he purchased in Nevada — including several that left a trail of destruction and injuries after they blew up in a Los Angeles neighborhood. Arturo Ceja III faces the federal charges, according to the U.S. Attorney's office in Los Angeles. (ATF/United States Attorney's Office Central District of California via AP)

LOS ANGELES — A 27-year-old man was charged Saturday with illegally transporting tons of explosives he purchased in Pahrump — including several that left a trail of destruction and injuries after they blew up in a Los Angeles neighborhood.

Arturo Ceja III faces the federal charges, according to the U.S. attorney’s office in Los Angeles.

Seventeen people were hurt Wednesday — including nine Los Angeles police officers and a federal agent — in the blast, which also flipped and damaged cars and smashed windows in homes and a laundromat. The explosion was heard blocks away.

Ceja “made several trips to Nevada in late June to purchase various types of explosives — including aerial displays and large homemade fireworks containing explosive materials — that he transported to his residence in rental vans,” the U.S. Attorney’s office said in a statement.

He bought most of his explosives from a fireworks dealer in Pahrump, according to the criminal complaint against him.

Ceja drove from Los Angeles to Las Vegas “6 or 7 times.” He would rent a truck or van in Las Vegas, pay cash for fireworks from Area 51 in Pahrump, drive back to Los Angeles and then drop the vehicle back in Las Vegas, the complaint said.

A representative for Area 51 did not respond to a request for comment Sunday.

“Ceja told investigators that he bought homemade explosives — constructed of cardboard paper, hobby fuse and packed with explosive flash powder — from an individual selling the devices out of the trunk of a Honda” in the parking lot of the fireworks dealer in Nevada, according to the complaint.

Fireworks in California can be sold for as much as four times what purchasers pay for the fireworks in Nevada, according to the complaint.

Ceja did not have a Bureau of Alcohol, Tobacco, Firearms and Explosives or any other kind of permit “that would allow him to transport either aerial display fireworks or homemade fireworks made with explosive materials, including but not limited to flash powder,” according to the complaint affidavit written by a special agent with the ATF.

Ceja is being held until his initial court appearance scheduled for Tuesday in U.S. District Court in Los Angeles.

On Wednesday, about 10 pounds of homemade explosives blew up while they were inside a spherical containment vessel on a tractor-trailer, tearing the rig apart in what was supposed to be a safe operation by the Los Angeles Police Department to handle explosives that were too unstable to remove from a South Los Angeles neighborhood where tons of illegal fireworks were discovered.

The one-ton lid of the vessel flew into a backyard two blocks away, breaking a lemon tree and damaging the house.

Experts say the explosion was highly unusual, especially for a law enforcement agency with the size and resources of the LAPD.

The blast could have been the result of human error — such as not correctly sealing the vessel or overloading it with material — or a defect in the equipment like a microfissure that has grown with time and use. Or both.

The explosion came after police had spent the day disposing of about 3,000 to 5,000 pounds of commercial-grade fireworks that were found in Cejas’ home following an early-morning tip. Police found some of them on a patio in cartons stacked 8 to 10 feet high.

Fireworks are illegal to sell or possess in Los Angeles and in unincorporated areas of the county.