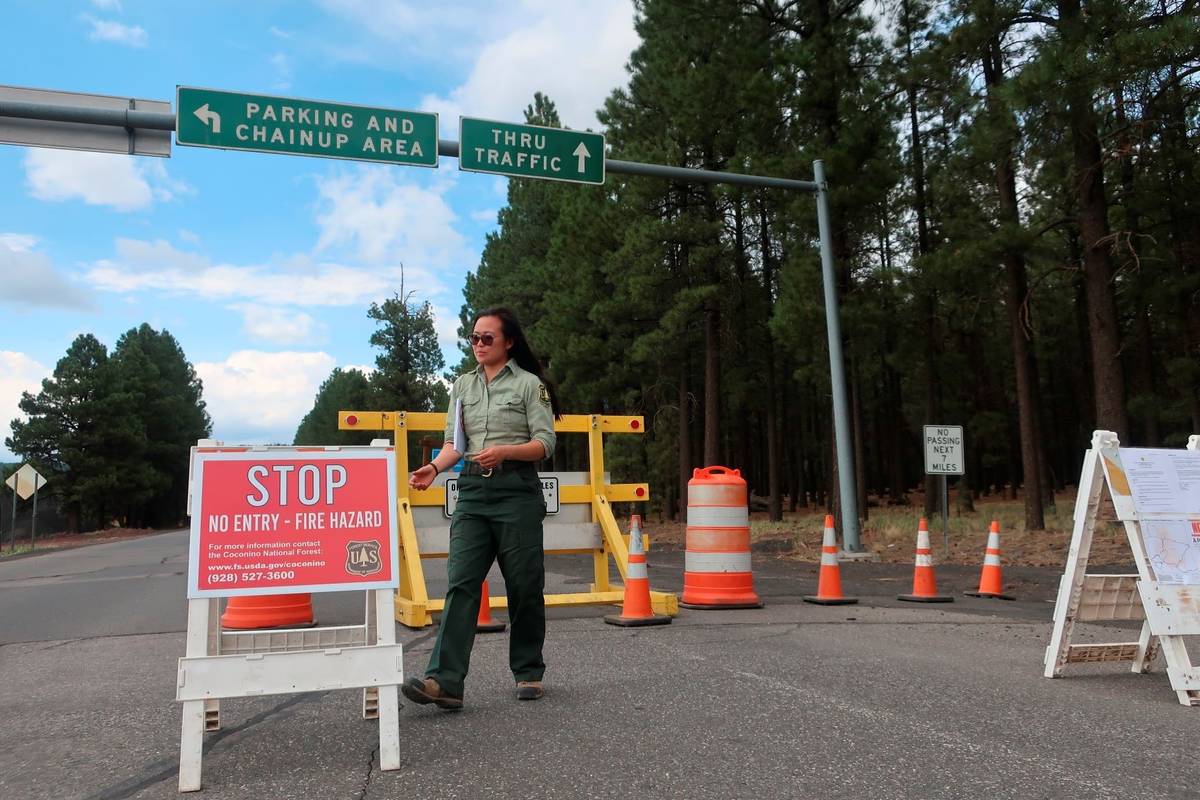 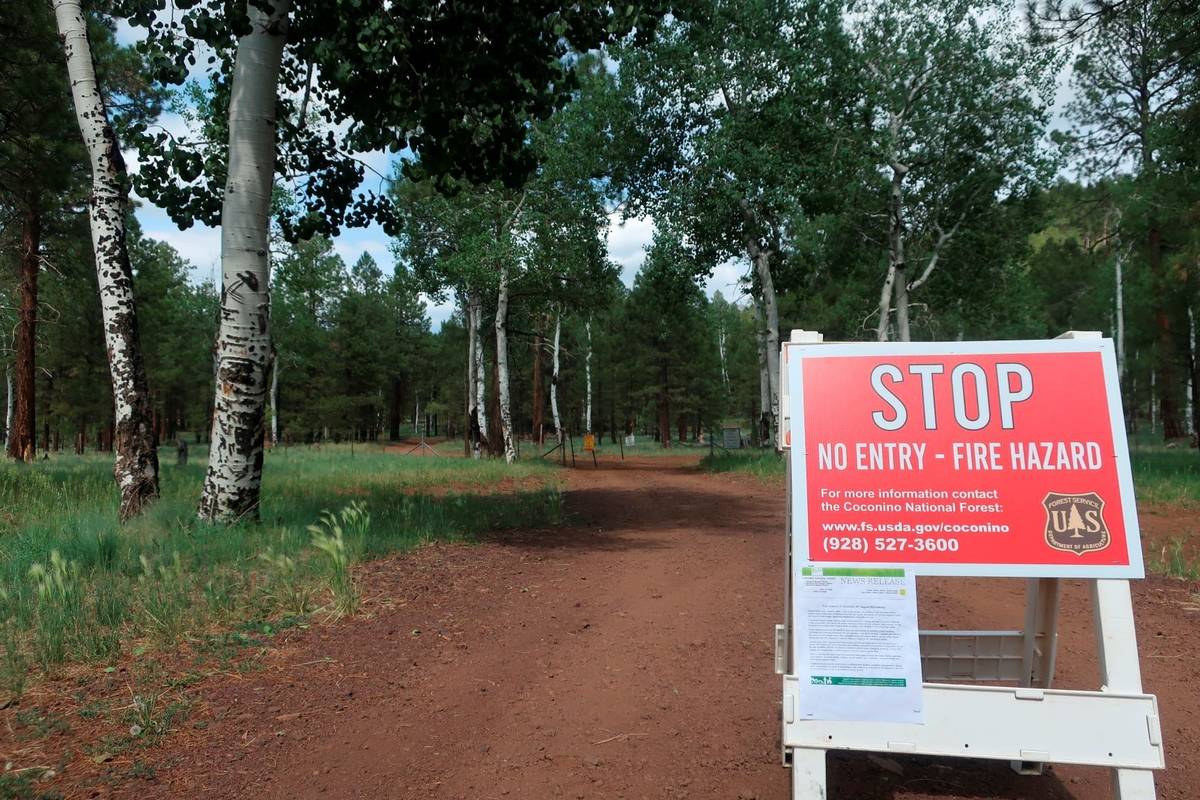 A sign posted ahead of a forest road announces the closure of the national forest surrounding Flagstaff, Ariz., on Wednesday June 23, 2021. (AP Photo/Felicia Fonseca) 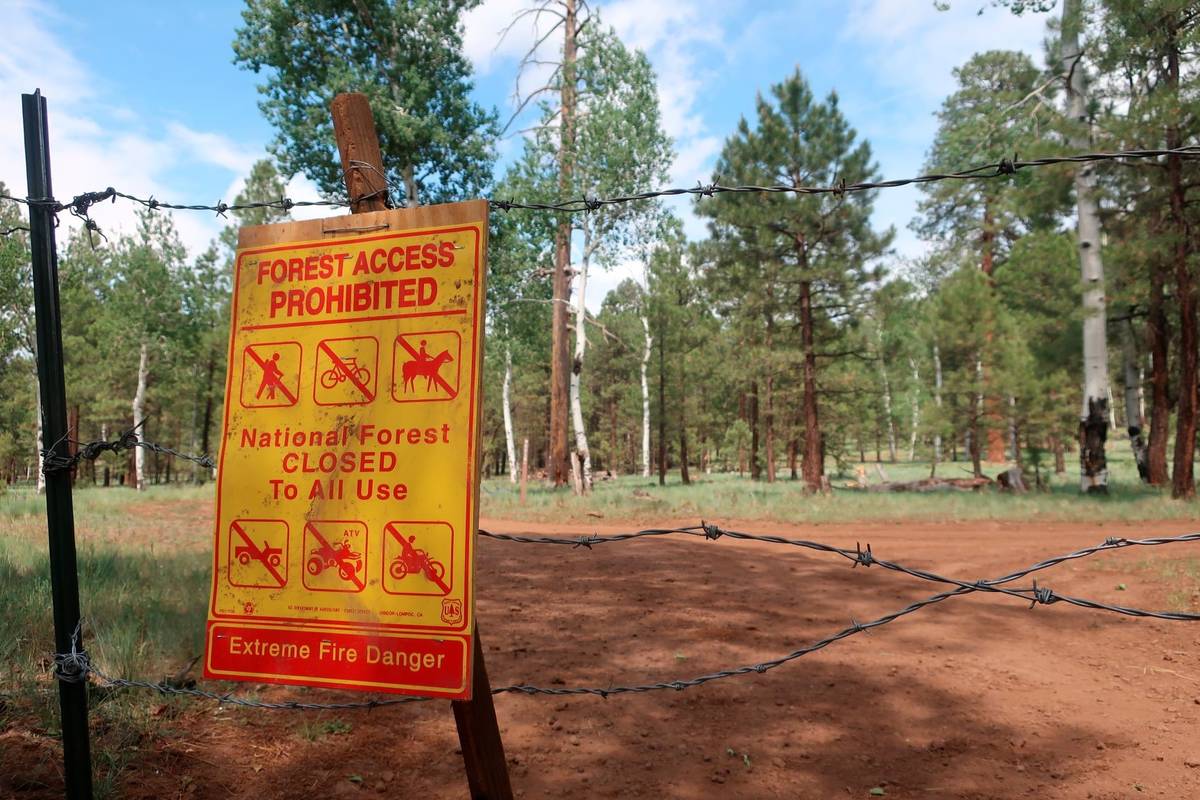 FLAGSTAFF, Ariz. — When temperatures are sweltering in Arizona’s desert areas, people head to the forests to camp, hike, fish and just cool off.

But options for finding respite from the heat will be slim now that all but one of Arizona’s national forests are enacting broad shutdowns amid high fire danger and as firefighting resources run thin because of blazes already burning across the state.

Portions of forests in other western states also are off-limits. But the shutdowns in Arizona are the most widespread.

Kathy Howard set out for a hike in Sedona on Wednesday a couple of hours before the Coconino National Forest closure went into effect. She crossed a creek where she enjoys listening to water gently roll over the rocks, turned right and was greeted with caution tape.

Her plans were dashed.

“I have to say I’m glad that they did close the forest because we don’t want to lose our trees and all the flora and fauna out there,” said Howard, who splits her time between Scottsdale and Santa Fe, New Mexico.

Arizona has been a hotbed for wildfires so far this year, with more large fires burning than in any other state and across all terrain. The fires have forced rural residents from their homes and sent motorists on sometimes lengthy detours.

Firefighters got help Wednesday with cooler weather and the hope of rain. Still, they were on alert for thunderstorms that could produce lightning and touch off more blazes.

The Coconino and Kaibab national forests in northern Arizona closed Wednesday. The Apache-Sitgreaves, Prescott and Tonto were set to close later this week. The Tonto near Phoenix is closing but will leave most of its lakes open for recreation.

A previous, full closure of the Coconino forest happened in 2006 and lasted nine days. A 2002 shutdown lasted nine weeks, encompassing the Memorial Day and July 4 holidays.

Brady Smith, a spokesman for the Coconino forest, said employees were out Wednesday scouring the forest for campers, recreational vehicles, hikers and locals to let them know the forest is closed.

“We have as many people as we can,” he said.

Beyond inconveniencing campers and hikers, the forest closures are felt by ranchers who can’t graze their livestock in the forest, researchers who can’t conduct studies, and businesses that rely on tourism. Any forest-thinning projects would be delayed.

A ski resort outside Flagstaff that runs a scenic chairlift in the summer also is closed because it operates under a permit with the U.S. Forest Service.