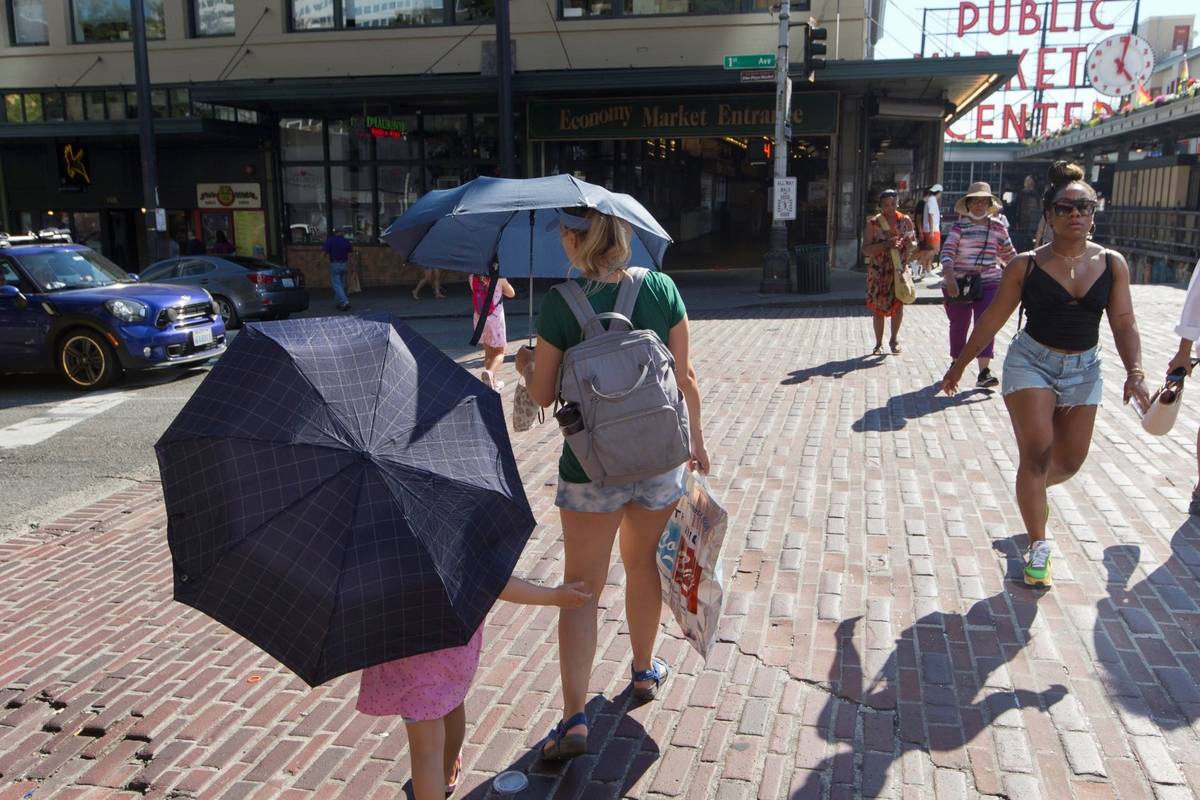 Sabina Ehmann and her daughter Vivian, visiting Seattle from North Carolina, are prepared with umbrellas to shield the sun during a heat wave hitting the Pacific Northwest, Sunday, June 27, 2021, in Seattle. (AP Photo/John Froschauer) 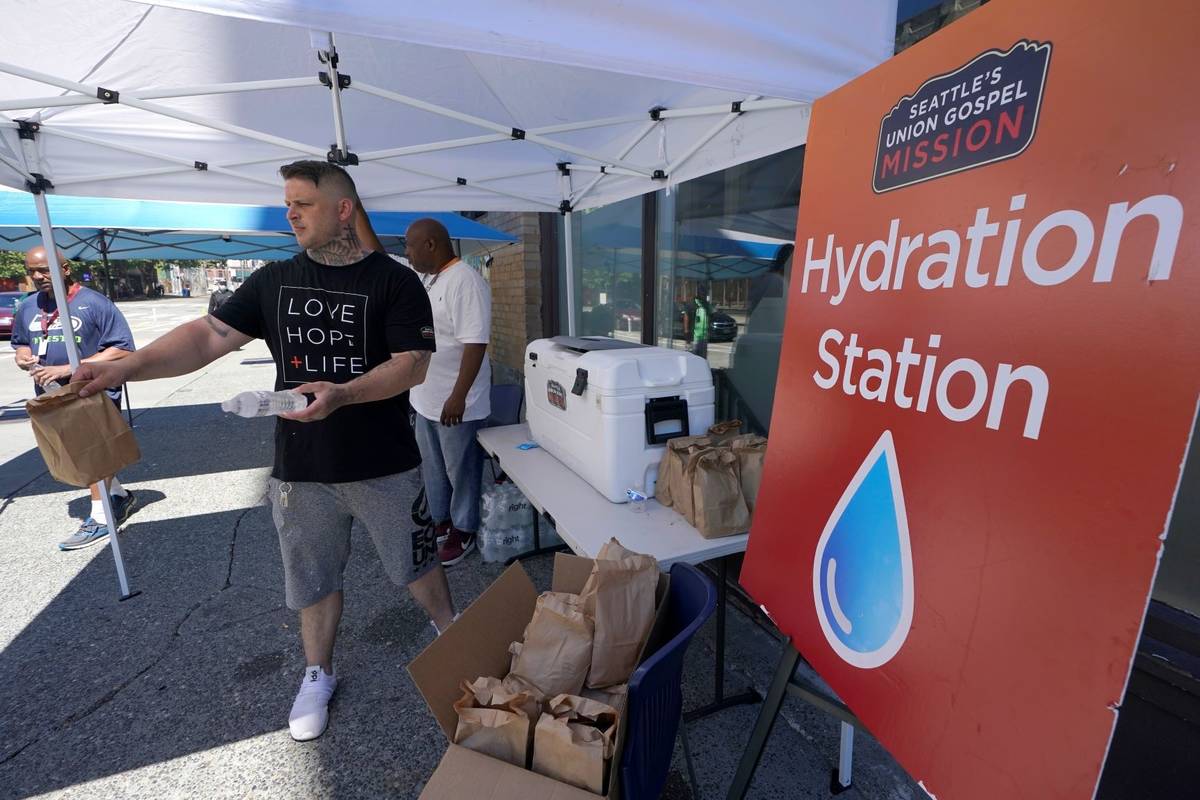 Carlos Ramos hands out bottles of water and sack lunches, Monday, June 28, 2021, as he works at a hydration station in front of the Union Gospel Mission in Seattle. (AP Photo/Ted S. Warren)

The deadly heat wave that roasted the Pacific Northwest and western Canada was virtually impossible without human-caused climate change that added a few extra degrees to the record-smashing temperatures, a new quick scientific analysis found.

An international team of 27 scientists calculated that climate change increased chances of the extreme heat occurring by at least 150 times, but likely much more.

The study, not yet peer reviewed, said that before the industrial era, the region’s late June triple-digit heat was the type that would not have happened in human civilization. And even in today’s warming world, it said, the heat was a once-in-a-millennium event.

But that once-in-a-millennium event would likely occur every five to 10 years once the world warms another 1.4 degrees (0.8 degrees Celsius), said Wednesday’s study from World Weather Attribution. That much warming could be 40 or 50 years away if carbon pollution continues at its current pace, one study author said.

This type of extreme heat “would go from essentially virtually impossible to relatively commonplace,” said study co-author Gabriel Vecchi, a Princeton University climate scientist. “That is a huge change.”

The study also found that in the Pacific Northwest and Canada climate change was responsible for about 3.6 degrees (2 degrees Celsius) of the heat shock. Those few degrees make a big difference in human health, said study co-author Kristie Ebi, a professor at the Center for Health and the Global Environment at the University of Washington.

“This study is telling us climate change is killing people,” said Ebi, who endured the blistering heat in Seattle. She said it will be many months before a death toll can be calculated from June’s blast of heat but it’s likely to be hundreds or thousands. “Heat is the No. 1 weather-related killer of Americans.”

In Oregon alone, the state medical examiner on Wednesday reported 116 deaths related to the heat wave.

The team of scientists used a well-established and credible method to search for climate change’s role in extreme weather, according to the National Academy of Sciences. They logged observations of what happened and fed them into 21 computer models and ran numerous simulations. They then simulated a world without greenhouse gases from the burning of coal, oil and natural gas. The difference between the two scenarios is the climate change portion.

“Without climate change this event would not have happened,” said study senior author Friederike Otto, a climate scientist at the University of Oxford.

What made the Northwest heat wave so remarkable is how much hotter it was than old records and what climate models had predicted. Scientists say this hints that some kind of larger climate shift could be in play — and in places that they didn’t expect.

“Everybody is really worried about the implications of this event,” said study co-author Geert Jan van Oldenborgh, a Dutch climate scientist. “This is something that nobody saw coming, that nobody thought possible. And we feel that we do not understand heat waves as well as we thought we did. The big question for many people is: Could this also happen in a lot of places?”

The World Weather Attribution team does these quick analyses, which later get published in peer-reviewed journals. In the past, they have found similar large climate change effects in many heat waves, including ones in Europe and Siberia. But sometimes the team finds climate change wasn’t a factor, as they did in a Brazilian drought and a heat wave in India.

Six outside scientists said the quick study made sense and probably underestimated the extent of climate change’s role in the heat wave.

The models also underestimate how dry soil worsens heat because there is less water to evaporate, which feeds a vicious cycle of drought, said Daniel Swain, a climate scientist at UCLA and the Nature Conservancy.

The study hit home for University of Victoria climate scientist Andrew Weaver, who wasn’t part of the research team.

“Victoria, which is known for its mild climate, felt more like Death Valley last week,” Weaver said. “I’ve been in a lot of hot places in the world, and this was the worst I’ve ever been in.